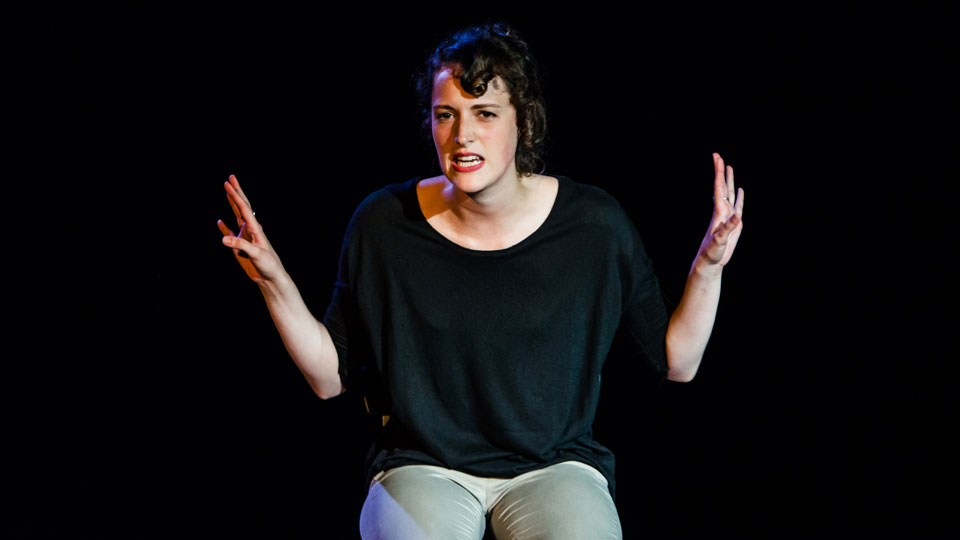 Fleabag, currently taking Soho Theatre by storm, is a one-woman show pullulating with sexual humour by actor/writer Phoebe Waller-Bridge that is hilarious, vulgar and compelling.

Meet Fleabag: a twenty-something stumbling through life. Boyfriend Harry has recently packed his things and left the flat (again), and the guinea-pig-themed cafe she’d been running with her late friend Boo is on the verge of bankruptcy. Of course, her high-flying sister is doing far better than she is, her dad is nowhere to be seen, and when she accidentally exposes herself during a job interview to a man recently accused of sexual harassment, it looks like Fleabag has left herself with a mammoth task in sorting out her mess of a life.

Phoebe Waller-Bridge’s one-hour play is a great piece of writing, instantly drawing you into Fleabag’s world and vividly painting it. Considering the stage consists of a single chair, with a few lighting and sound cues providing texture, the performance is rich and warm: Waller-Bridge is a born storyteller.

Much will be said about the humour of the piece, which is after all its main strength. Waller-Bridge has an excellent ear for dialogue and comic timing, and there’s a lot to laugh long and hard about. Asides about the shenanigans of pithily-sketched characters often bring the most rewards: the boyfriend’s toilet cubicle vomiting incident proving especially riotous. Waller-Bridge characterises all of the voices skilfully too, with some great facial expressions for her rodent-faced lover.

Whilst the laughs are plentiful, there are shades of darkness in the script too: and we wonder if Fleabag’s loneliness and isolation could have been teased out more? As it stands, it’s a peculiarly macabre incident with a guinea pig that provides moments of soberness and horror, rather than anything precipitated by Fleabag’s own psyche. Waller-Bridge is undoubtedly at her most comfortable and successful with comedy.

There are perhaps a few too many characters in the show. Whilst Fleabag is established as sex-mad (“I’m not obsessed with sex. I just can’t stop thinking about it,”) it does become a challenge to keep up with her busy bedroom shenanigans, and losing a few subplots would afford greater tightness and focus on the main story. The show is by no means exclusive of male audience members, but the humour will resonate more strongly with women.

Running to just over an hour, Fleabag will appeal to anyone looking for a lively and comedic performance that leaves plenty of time for drinks afterwards. Phoebe Waller-Bridge is certainly one to watch. The show runs at the Soho Theatre until 25th May.