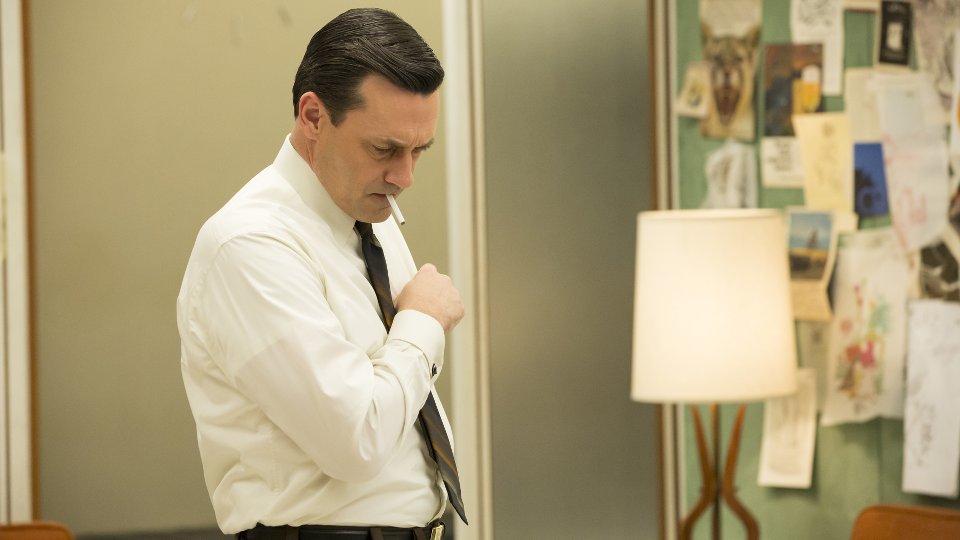 Awkward is the best way to describe the latest episode of Mad Men which had us fidgeting and cringing as much as Don (Jon Hamm) and Betty (January Jones).

If you haven’t seen the latest episode of Mad Men and don’t like spoilers we recommend you stop reading now. If you have seen the episode then keep reading to relive all of the action.

The episode opened with Don enjoying an afternoon at the cinema before returning home to call Dawn (Teyonah Parris) for an update and to ask a few favours. Unimpressed when the newly promoted Dawn, which he of course didn’t know about, fobs him off saying she’s too busy to personally see to the errands Don slammed down the phone when Dawn said she couldn’t connect him to Megan’s (Jessica Pare) agent who had called to speak to him.

Don then called Alan’s office to find out what he wanted and is surprised when he’s told that Megan has been getting a bit too carried away when it comes to impressing casting directors. When we say carried away we mean one step away from stalking. Alan asked Don to have a word with his wife which Don took as an opportunity to visit Megan in L.A.

We’re pretty sure he regretted that decision fairly quickly because after a quickie, Don brought up the subject of Megan’s agent calling him which went down like a lead balloon. In anger Megan accused Don of having an affair and attacked him based on the behaviour she’s seen from him in the past and pointing out how hard he is to get hold of.

Don finally came clean and told Megan that he was on forced leave from work and he didn’t tell her because he didn’t want her to worry. This caused her to get even more upset as she realised Don could have been living with her all this time but deduced that it was clear he didn’t want to. Soon she was telling him the marriage was over and asked him to leave.

If Don thought things couldn’t get much worse then he was in for an even bigger surprise. Upon his return to New York he had dinner with another firm who were trying to woo him. When a woman approached the table and threw herself at him mid-pitch, Don curtailed the meeting. On his way home he stopped by Roger’s (John Slattery) apartment and demanded a meeting about coming back to work. Roger told him to come in Monday so they can sort things out.

On his return home, Don calls a very stroppy Megan to apologise for his deceit. She doesn’t have any of it and is too upset to properly hold a conversation. He told her that he’s going back to the agency but she argued back that he was supposed to be getting a job in L.A. to be with her. She then told Don to stop pushing her away and asked him not to visit her for the moment.

Fast-forward to Monday morning and Don is suited and booted ready for his return to SC&P. The only problem is Roger is nowhere to be seen and none of the other partners had any idea he was coming in. Bert (Robert Morse) reacts the worst with Don’s replacement Lou (Allan Havey) kicking off about his two-year contract not being up yet. Joan (Christina Hendricks) is unusually frosty whilst Ken (Aaron Staton) tries to make small talk; Don’s least favourite thing. Ginsberg (Ben Feldman) and Stan (Jay R. Ferguson) are much warmer willing to catch Don up-to-speed. The killer blow though was left for former protégé Peggy (Elisabeth Moss) who told Don that no one in the office had missed him. Cutting words Peggy!

As Don was served a mixture of awkward conversation, Roger finally turned up and was hauled into a meeting with Joan, Bert and Jim (Harry Hamlin). None of them were too happy with Roger and they all voiced their belief that Don should be let go of. If only it were that easy. In order to get rid of Don they would have to fire him and buy out his shares as a partner, which would put the company in financial jeopardy.

Dawn asked Don to join the partners in the conference room where they agreed he could return to the company but with some strict stipulations. He wasn’t allowed to be alone with clients, had to stick to a script in meetings, wasn’t allowed to drink in the office and worst of all had to work under Lou. Joan informed Don that if he broke the stipulations he would be sacked and lose his partner shares. Amazingly Don smiled and accepted the terms. Talk about awkward!

What about everyone else then? Peggy’s pent up frustration continued as none of her work was submitted for an award. Surely she’s going to come to blows with Lou soon isn’t she?

The other storyline in the episode saw more crazy behaviour from Betty. After catching up with a friend over lunch, she went out with Bobby (Mason Vale Cotton) on a field trip and lost her temper with him when he swapped her sandwich for some sweets. Then like some evil Bette Davis type mother she forced him to eat all the sweets as punishment. She also drank some fresh cow’s milk and complained about the farmer’s daughter not wearing a bra!

When she returned home Betty complained to Henry (Christoper Stanley) that none of her children loved her and she couldn’t understand why. She told him that Bobby had ruined an otherwise perfect day and expressed the fear that Gene would hate her like her other two children do. No Mother of the Year awards for Betty any time soon we don’t think.

Mad Men continues in the US at 10/9c Sundays on AMC and in the UK at 10pm Wednesdays on Sky Atlantic HD.