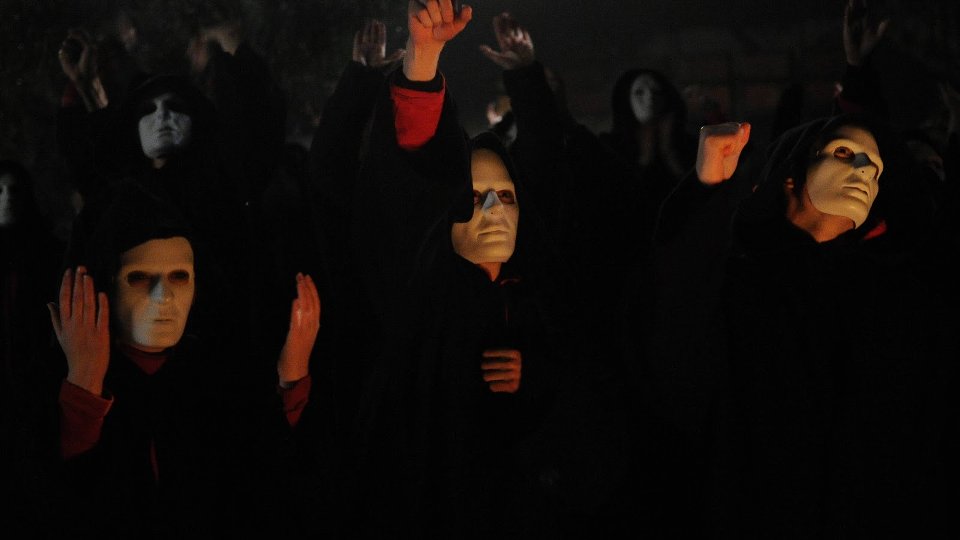 Tonight’s episode of The Following seemed to mark the end for one of the season’s big bads and set things up nicely for the final two episodes of the season.

If you haven’t seen the latest episode of The Following and don’t like spoilers we suggest you stop reading now. If you are up-to-date and want to relive all the action then keep reading.

The Reaping really did live up to its title as Korban was left in tatters by the end of the episode. Before we get to the juicy stuff though we’ll go back to the beginning of the episode and recap.

At the end of last week’s episode Ryan (Kevin Bacon) followed some of Joe’s  (James Purefoy) followers back to the Korban camp and hid out whilst observing what was going on. In tonight’s episode Ryan went in all guns blazing literally as he tried to make his way to Joe. After killing a cult member and stealing their outfit and mask, Ryan attended the latest ritual as Joe tried to get Preston Tanner (Carter Jenkins) to kill someone.

Before he got chance to make a decision, Preston was interrupted when Ryan took a pot shot at Joe (and missed). Causing chaos in the cult, Ryan made a quick exit as Joe and Emma (Valorie Curry) ran for cover. In his room, Joe was finally told that Ryan may have followed Robert (Shane McRae) back to Korban following the kidnapping of Preston. Despite pleas from Emma to flee to safety, Joe demanded Robert search for Ryan and bring him back alive.

Hiding in the woods, Ryan soon realised that if he wanted to get up-close to Joe he needed to allow himself to be captured. After disarming Robert’s aide, Ryan shot his gun into the air to draw attention to himself which led to Robert discovering him and taking him to Joe. What followed next was a bit of a mess on Ryan’s part as Joe decided to sit him in on the continuation of the ritual he interrupted the previous night.

To Ryan’s horror Preston was once again told to kill a cult member. Trying to appeal to Preston’s rational side, and call Joe’s bluff, Ryan tried to dissuade him out of it but fear got the better of Preston as he stabbed the follower to death. The whole event was filmed as part of Joe’s war on religion against Preston’s father Kingston (Tom Cavanaugh).

Speaking of Kingston, the preacher told Max (Jessica Stroup) and Mike (Shawn Ashmore) that he would pray for the return of his son indicating that it would prove the existence of God when Preston returned safely. Mike warned him not to do it on TV but of course Kingston ignored him and made a live statement to the press about Preston’s kidnap.

Whilst Ryan was being subjected to Joe’s horrors, Lily (Connie Nielsen) finally found the location of Korban and abandoned her house with her ‘family’ to go and capture Joe. She left at the right time as the FBI had just located her house as she fled. Lucky escape Lily.

Arriving outside of Korban with Mark and Luke (Sam Underwood), Lily stayed back whilst she sent in an armed team to take out the cult and find Joe. What she didn’t count on was Ryan already being inside. Managing to break free from his shackles, Ryan fought back against Lily’s men killing them all. Unfortunately whilst he was busy doing that, Joe made his escape with Emma and Robert. Uh oh!

Soon Mike and Max were on the scene and reunited with Ryan. When Mike realised that Lily would be close by he snuck off on his own and found her alone by her car. Pulling a gun on her, he was close to pulling the trigger but Ryan and Max arrived just in time to talk him out of it. Well they thought that’s what they were doing but Mike ignored them completely and shot Lily leaving her lifeless on the floor. Is she really dead?

If she is we’re a bit disappointed as there’s been little point in her hanging around since Joe ditched her. We get that Mike wanted revenge for the murder of his father but was anyone else hoping for an Emma and Lily showdown? We know we were.

What about Claire (Natalie Zea)? Well she still remained completely under-used after last week’s cliff-hanger which saw her reveal that she was still alive to Carrie (Sprague Grayden). In a moment on uncharacteristic thoughtfulness Carrie refused to interview Claire on TV in order to draw Joe out fearing for her safety.

Mike and Max blocked Claire’s Internet so she couldn’t broadcast anything herself but that didn’t stop Claire from calling up Carrie to appeal to her journalist side once again. Trying to avoid dealing with Claire, Carrie was finally snared when she realised Claire would just go elsewhere to get her story out.

Towards the end of the episode Carrie appeared on TV with a message specifically for Joe. She recited a passage as dictated by Claire which led Joe to realise his wife wasn’t dead after all and threw a rather large curveball into his latest evil plan. Is it enough to stop him from committing more murders? Will Claire make it out of season 2 alive? So many questions and only two more episodes to answer them.

The Following continues at 9/8c Mondays in the US on FOX and 10pm Tuesdays in the UK on Sky Atlantic.