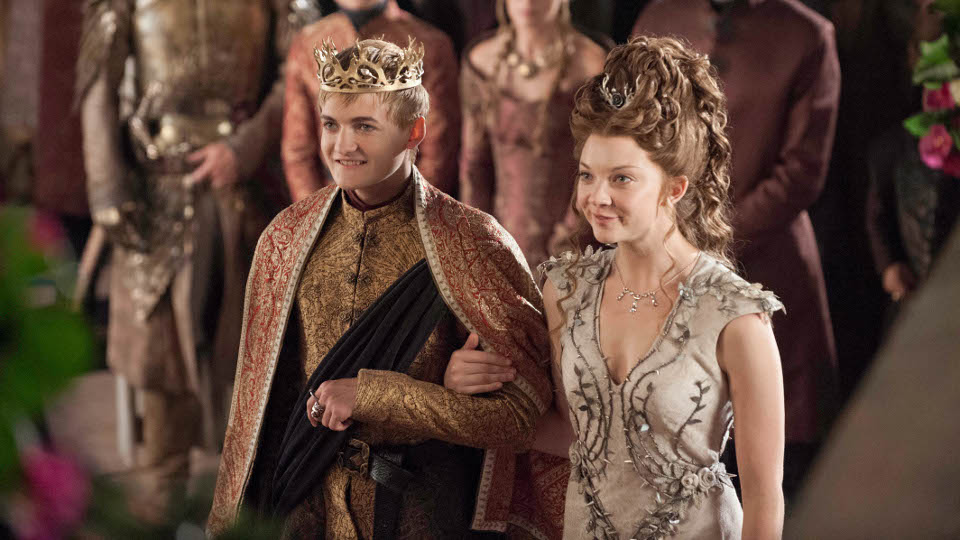 Last week the wait was finally over as Game of Thrones season four kicked off with a fantastic premiere – Two Swords.

If you haven’t seen tonight’s episode yet of Game of Thrones and don’t want anything spoiled then please stop reading now. If you are up-to-date and want to relive the action then keep on reading.

The Lion and the Rose is written by George R.R. Martin and directed by Alex Graves. The episode opened up with Ramsay Snow (Iwan Rheon) hunting a girl in the woods. For help he’s brought along Myranda (Charlotte Hope) his pet Reek/Theon (Alfie Allen) and some hunting dogs. It’s a brutal scene that shows more of the sadistic side of Ramsay as well as showing that Myranda enjoys the same entertainment.

Back at King’s Landing we see Tyrion (Peter Dinklage) and brother Jaime (Nikolaj Coster-Waldau) at breakfast. Jaime isn’t hungry and is embarrassed that he can’t fight like he used to without his hand. Tyrion suggests he train with Bronn (Jerome Flynn) who can keep it secret for a fee. This is followed by their first training session and Bronn knocks Jaime about with ease. We don’t think it will be long before he can give Bronn a run for his money.

At the Dreadfort Ramsay’s father Roose Bolton (Michael McElhatton) returns with a new wife in tow. After inspecting Reek he’s expresses his disappointment that Ramsay tortured him. Theon would have been an important prisoner to exchange with the Ironborn to gain access to the North.

Theon looks a broken man and seems loyal to Ramsay. To show his father just how in control he is, Ramsay tells Reek to shave him. During the shave he gets him to tell his father that Bran (Isaac HempStead-Wright) and Rickon Stark (Art Parkinson) are alive. He then tries to provoke Reek by giving him the news that his brother Robb Stark is dead. Although obviously upset he doesn’t react. We feel rather sorry for Theon at the moment and hope he gets a chance for revenge.

Roose sends a man in search of Bran and Rickon. At the same time he gives Ramsay a mission to capture Moat Cailin.

Returning to King’s Landing we see Lord Varys (Conleth Hill) passing on information to Tyrion that Cersai (Lena Headey) knows about Shae (Sibel Kekilli). Tyrion explains that despite his efforts she refuses to leave.

Elsewhere King Joffrey (Jack Gleeson) and Margaery Tyrell (Natalie Dormer) are holding their wedding breakfast. At the event we see Cersei point out Shae to Tywin (Charles Dance). Joffrey is presented with various gifts including a rare book by Tyrion and the Valyrian steel sword that Tywin forged and kept in the premiere. Delighted with the sword he slices up Tyrion’s gift and names the sword Widow’s Wail.

Afterwards Tyrion tries again to get Shae to leave but she is having none of it. He resorts to hurtful lies about his feelings for her to push her away. Bronn is told to escort her to a waiting boat to cross the Narrow Sea.

The action then shifts to Dragonstone so we can catch up with Melisandra (Carice van Houten) and Stannis (Stephen Dillane). They are having people burned at the stake to keep the Gods happy.

Beyond the Wall we finally get the chance to catch up with Bran and Hodor (Kristian Nairn). Bran is shown using his warg abilities to see through the eyes of his wolf Summer to hunt a deer. Hodor wakes him up and Bran is warned he must be careful not to use his powers excessively as he risks losing contact with his body.

They come across an unusual tree with red leaves and a face carved into the trunk. Bran gets Hodor to carry him to the tree and when he touches it he sees a vision. The vision gives him a clue that he must continue to head north.

The action then shifts unexpectedly to the wedding.of King Joffrey and his new Queen Margaery. Last season made us nervous when Game of Thrones tackles weddings but this one was the best yet.

We see banter with Olenna (Diana Rigg) and Tywin at the start of the wedding celebrations. Bronn informs Tyrion that Shae has left and suggests he drinks until he feel like he’s done the right thing.

Joffrey is his normal cheery self and appears to be going out of his way to upset everyone possible. He cuts short a song that is being performed before the new Queen makes a speech. She makes a popular announcement that all leftover food will go to the poorest of the poor. This is later overruled by Cersai who says to pass the leftovers to the dogs.

Jaime confronts Loras Tyrell (Finn Jones) about the proposed marriage to Cersai. Meanwhile Brienne (Gwendoline Christie) is accused by Cersai of being in love with Jaime.

Next, much to his own amusement, Joffrey introduces a play about the War of the Five Kings. It appears to be an effort to upset and it works with Sansa (Sophie Turner) near to tears and Loras storming off. Most of all it is Tyrion who is disgusted at the decision to use dwarves as the cast.

Embarrassed and upset Tyrion is then requested by the King to take part. He refuses and humiliates Joffrey instead by suggesting that he impress the crowds with his swordplay. Joffrey decides to make things worse for Tyrion by tipping wine over his head and ordering him around.

He requests that Tyrion be his cupbearer before making it as awkward as possible for Tyrion to follow his requests. Finally he demands that Tyrion should kneel before him. We feel really sorry for Tyrion as he’s ridiculed by Joffrey. It’s a tense moment until Margaery distracts everyone with mention of the arrival of the wedding pie.

Joffrey slices the giant pie open with his new sword and doves fly out. He starts eating but complains the pie is dry and demands more wine from Tyrion. After gulping it down he develops a cough and everyone believes that he is messing about. Turns out he’s been poisoned. As almost everyone tries to rush to his aid it’s clear that it’s the end for Joffrey. We’ve loved to hate him right from the start but almost feel sorry for him at the end. He dies a gruesome death in the arms of his mother Cersei. Good riddance.

In his last seconds of life he managed to point at Tyrion who was examining the cup he gave Joffrey. Cersai goes completely mental and orders the arrest of Tyrion.

The death of Joffrey has been a long time coming and we’re going to miss hating on him. The big question now is who did it? Our money is on Olenna or Sansa.

Let us know your thoughts on The Lion and the Rose in the comments below. Who do you think poisoned Joffrey?