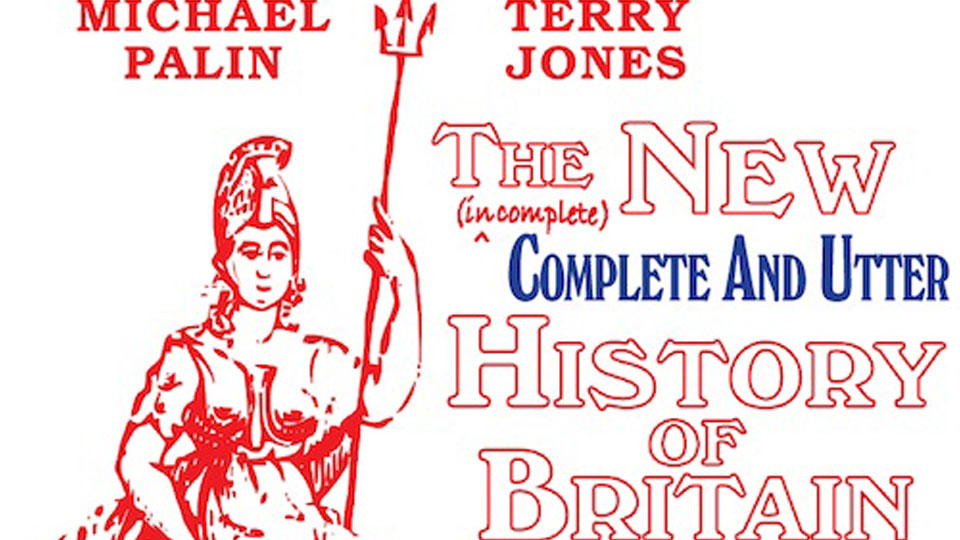 Immediately prior to the very first series of Monty Python’s Flying Circus, comedy writing team Michael Palin (the nice one who travels a lot) and Terry Jones (the Welsh history buff) wrote and starred in The Complete and Utter History of Britain. Broadcast in 1969, the show went out on ITV, lasting for only one season. By the end of the year, Jones and Palin had joined the Monty Python gang, moved to the BBC, and the rest was, um, history…

You may not have heard of this series, nor ever seen it, because it is sadly no longer either compete or utter. Back in the days when television was as ephemeral a medium as theatre, recorded broadcasts were often junked, and The Complete and Utter History of Britain fell victim to the cull. Now, only two out of the seven episodes remain. More confusingly yet, there was some concern about the first two episodes back in 1969, which were half an hour in length, and they were rerecorded in truncated 25-minute instalments. Both versions are included on this release.

As well as the two surviving episodes, The New Incomplete Complete and Utter History of Britain includes a fifty-two minute special which features newly-recorded linking narration by Michael Palin and Terry Jones, with the same sketches you can see in the individual episodes inserted. And don’t they look well for men of their age?

The Complete and Utter History of Britain is Monty Python’s Flying Circus in embryo form. The joyous absurdity, silliness and cleverness of the Palin/Jones partnership is there in abundance, and many of the sketches wouldn’t feel out of place in a Python series. Thus we have William the Conqueror interviewed in a bathtub after his victory at the Battle of Hastings, talking as if he’s a football manager who’s just won an important cup tie. There’s a nod to the overlooked year 1065, in which not much of interest happened. You’ll see an estate agent showing a young couple around Stonehenge, persuading them that it’s really not draughty but cleverly utilises doorways. You’ll learn how King John was duped into signing the Magna Carta.

Whilst many of the characters are performed by Palin and Jones, there are a few other recognisable faces. Colin Gordon, possibly best-remembered as Patrick McGoohan’s nemesis in a few episodes of The Prisoner, is the straight man playing the narrator; and Roddy Maude-Roxby is an eccentric historian who is very good at the familiar Palin/Jones wordplay. Diana Quick, later a stage actress of considerable renown (and Julia in Brideshead Revisited) plays a damsel in distress in a sketch in which the Knights of the Round Table, in response to union demands, run an overly-bureaucratic rescue operation (shades of Holy Grail…).

The archive nature of the material, recorded onto videotape, means that high-definition does it no favours, and watching the originally broadcast episodes is like revisiting an old black and white television set (for those old enough to remember). The newly recorded material is also in black and white, with dating effects added in post-production, which lends the production a welcome uniformity, even if it’s probably not a release that pushes Blu-ray technology to the limit.

For new material in the extras, there’s an interview with producer Humphrey Barclay in which he is very honest about the difficulties surrounding the production and the mixed critical reception it received, as well as how head of comedy Frank Muir came to commission it in the first place.

If you like Monty Python’s Flying Circus, you’ll enjoy The New Incomplete and Utter History of Britain. Like Python, some of it is very funny and stands up well today. Some of it goes on for far too long and stretches a joke long past its sell by date. Aficionados of Palin and Jones will see this as an essential addition to their collection.