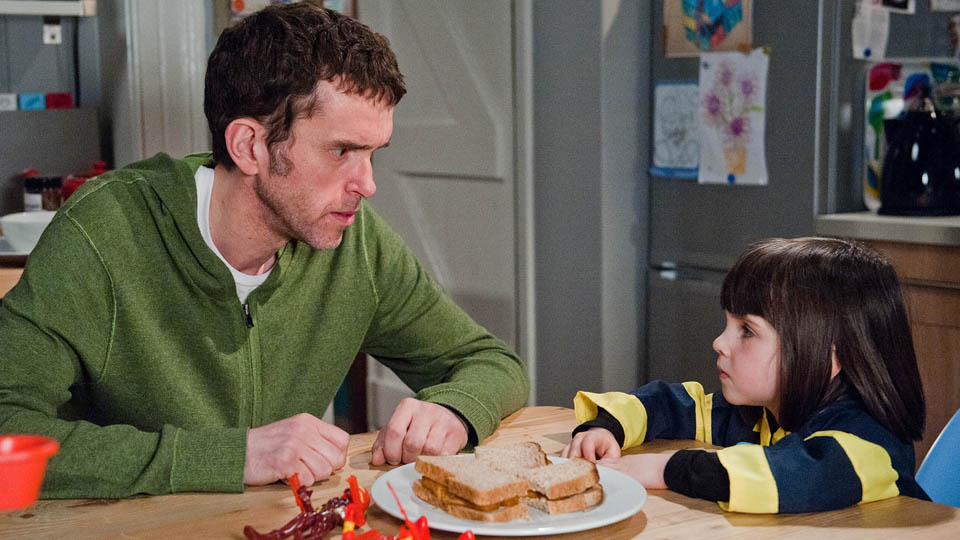 Marlon and Donna reconcile, but Donna is hiding a dark secret

After sending Donna away and saying he wants nothing to do with his daughter April, Marlon softens and invites Donna to the village to discuss possibilities.  Things don’t go to plan leaving Marlon sending her packing again, but then when April asks him “are you my Daddy?”, he caves in and starts to get to know his estranged daughter.  What he doesn’t realise though is that Donna has a motive for him being in his daughter’s life – she has a terminal illness that means she only has a few years to live at best.

Dom makes a pass at the Vicar

Poor old Dom has been having a rough time of it following Gemma’s death and this week he’s faced with Cain asking him to talk Belle out of pleading guilty to killing Gemma.  Funnily enough he’s not feeling charitable and tries to goad Cain into a fight in the pub but Vicar, Harriet, steps in and takes him home.  The pair had been getting cosy the night that Gemma died and an emotional Dom tries his luck again back at his place, flipping out when she declines his advances.  There is one silver lining to his week though when an anonymous donor posts an envelope of cash through his letterbox.

Megan stirs things up with Charity

Megan’s enjoying a blossoming romance with Jai and has made it clear she disapproves of her brother’s relationship with Charity.  This week she decides to aggravate the situation by placing an order for promotional chocolate for Home Farm with Jai and give him a bonus from petty cash.  Declan is unaware the two are now a bonafide item so is surprised when he walks in on them snogging, leading to some harsh words.

Megan decides to stir things up for Declan further when she tells Charity that she was the one who had previously leaked contract details to Jai in a bid to scupper Charity’s plan to plead poverty in their divorce settlement.

Poor Eric, despite his best efforts Val seems to have decided that she’d like to make things work with Ian, so at least she’d have a sex life.  In true Val style she seems to be rubbing Eric’s nose in it by going on dates with Ian and he just has to go along with it.

It seems though that for a holiday romance he was perfect but now the pair’s differences are beginning to show when he takes her to see an arthouse subtitled film and doesn’t seem to be a big drinker either.  Silly, silly Val!

Priya finally went into rehab for her eating disorder but seems to be leaning heavily on David which has Alicia worried.

Victoria slept with Ross but on her terms, with no strings attached.  So why does she keep phoning him now?

Kerry gave Pearl a makeover to impress Bernice who eventually caved in and agreed to give her a trial as a stylist if and when she manages to get her salon open.

Adam treated Katy to a fancy meal but then made her do a runner when the expensive bill proves too much for his credit card to take.  Unbeknownst to him, cousin Pete had just be wooing the very same restaurant as a new client for the farm but Adam’s actions have screwed that up!

News that Charity is pregnant causes shock, anger and joy – not least for Charity!  Declan wants her to keep it, Jai is furious as it was the issue that started the couple’s split.

James seems to be mulling something over in his head when he realises Adam is 22.  Could it be something to do with his dalliance with Moira we’re guessing about, oooh let’s say 22ish years ago?

Finn gets caught trying to return Declan’s stolen credit card and instead decides on stealing his identity instead.

The Dingles panic as Belle’s due to make her plea, will she stick with ‘guilty’ as planned?

Debbie decides to look into Pete’s past.