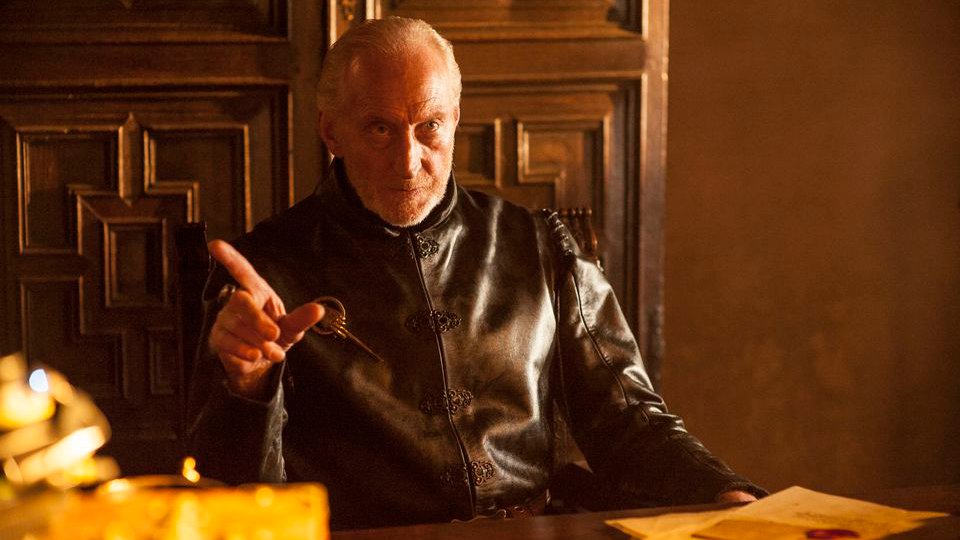 The wait between seasons of Game of Thrones seems to last forever but at least it’s not as long as it takes George R.R. Martin to write the books. Right from the first season the show became one of our favourites and we’re still getting over the events of season 3. Someone only has to mention the words ‘Red Wedding’ and we can feel ourselves tearing up. Thankfully the wait is finally over as Two Swords, the season four premiere, has arrived on screens around the world.

If you haven’t seen the Game of Thrones season four premiere yet and don’t want anything spoiled then please stop reading now. If you are up-to-date and want to relive the action then keep on reading.

Two Swords is written and directed by showrunners David Benioff and D. B. Weiss. The season opens up in King’s Landing with Tywin Lannister (Charles Dance) having Ned Stark’s massive Valyrian steel sword melting down. The steel is then reforged into two new smaller swords.

He gives one of the swords to his son Jaime (Nikolaj Colster-Waldau) in an attempt to bribe him into returning back to Casterly Rock to rule there. Jaime has spruced himself up a fair bit with a hair-cut and shave since last season and looks the part in his golden armour. Much to Tywin’s disappointment Jaime turns down his offer as despite losing his dominant hand he still wants to lead the King’s Guard. In Jaime’s own words “The King is never safe”.

Outside the city Tyrion Lannister (Peter Dinklage), who is now Master of coin, has been sent to welcome Prince Doran Martell who is due to arrive for the King’s wedding. Accompanying him are his squire Podrick (Daniel Portman) and knight Bronn (Jerome Flynn). The party turn up but Prince Oberyn (Pedro Pascal) is attending instead of his older brother.

They are informed that Oberyn has already arrived and they set off to find him. His reputation with the ladies sends them straight to Lord Baelish’s whorehouses. Oberyn doesn’t like Lannisters and before Tyrion tracks him down he gets into a fight with two Lannisters stabbing one through the wrist.

Tyrion defuses the situation and learns why Oberyn dislikes the Lannisters. Turns out his sister Elia was raped and killed by their henchman Gregor “The Mountain” Clegane. Oberyn asks that Tyrion tell Tywin that he has arrived and to tell him “the Lannisters aren’t the only ones who pay their debts”.

After quite a slow start the action then shifts across the Narrow Sea to Daenerys Targaryen (Emilia Clarke). She’s spending some time with her three dragons which have grown considerably since we last saw them. One is sat with her while the other two have taken flight to fight over a lamb. They drop it near her and as she tries to pet the closest dragon it takes her by surprise and snaps at her. Ser Jorah Mormont (Iain Glen) takes the opportunity to pop up with his usual wise words – “They are dragons, Khaleesi. They can never be tamed, not even by their mother.”

Dany heads back to her army in search of Daario Naharis (this season played by Michiel Huisman not Ed Skrein). She finds him in a gambling match against Grey Worm (Jacob Anderson) where they are competing to ride alongside her by seeing who can hold a sword for the longest! After she puts an end to their game she sets out with her army to Meereen – the last slave city.

Back in King’s Landing Sansa Stark (Sophie Turner) is looking her usual miserable self but you can’t blame her with her brother Robb and mother Caitlyn getting murdered. Her handmaiden Shae (Sibel Kekilli) tries to get her to eat something before her new husband Tyrion comes along to give her a pep talk.

Tyrion and Shae are then seen in one of the bedrooms where she tries to seduce him. He’s not in the mood much to her annoyance. Before the scene ends we discover someone is spying on them.

Elsewhere in the castle Jaime has his stump fitted with a solid gold hand from his twin sister and lover Cersei (Lena Headey) who is on fine form. After spending last season away from her Jaime is keen to get back to their incestuous ways but she’s having none of it. They are soon disturbed by the girl who was spying on Tyrion as she comes to dish the dirt to Cersei.

In the North we see Ygritte (Rose Leslie) and Tormund Giantsbane (Kristofer Hivju) bickering while waiting for orders from Mance Rayder (Ciaran Hinds). Tormund reckons she let Jon Snow (Kit Harrington) escape as she only shot him with three arrows and he didn’t die. They are then joined by some creepy guys called the Thenns who are all scarred and appear to be cannibals.

At Castle Black we see that Jon Snow did indeed survive and is looking rather well. He has a chat with friend Samwell Tarly (John Bradley) before going on trial for going AWOL last season. Jon tells them the truth of what he got up to including killing a fellow member of the Night’s Watch and sleeping with a wildling girl. He also gives warning of Mance Rayder marching on wall which seems prevent them from having him executed.

Returning to King’s Landing we see Margaery Tyrell (Natalie Dormer) and her grandmother Lady Olenna (Diana Rigg) talking about her wedding to Joffrey (Jack Gleeson). They are interrupted by Brienne of Tarth (Gwendoline Christie) who wants to discuss the death of Lord Renly.

Turns out King Joffrey is also sorting out some plans whilst being his normal obnoxious self. He’s poking fun at Jaime and bragging about saving the city and winning the war. Jaime points out that “the war is not over”. Joffrey gets extra nasty by showing Jaime the accomplishments of other Kingsguard compared to his own.

Back across the Narrow Sea we see Dany and her army continuing their march to Meereen. Daario appears to be trying to woo her with flowers while pretending he’s trying to teach her the ways of the people she is freeing. Every mile of the march they come to a marker and each had a dead slave child hung on it. They plan to bury them along the way.

Back in King’s Landing we’re treated to a scene with Jaime and Brienne. She wants to remind him of his vow to look after the Stark children while they watch Sansa. As Sansa leaves she is followed by a drunkard she tries to get away but it turns out to be Ser Dontos from season 2. He gives her a necklace.

Finally the episode moves to the Riverlands to see what The Hound (Rory McCann) and Arya Stark (Maisie Williams) are up to. His intention is to ransom her to one of Aunts. They come across a tavern and Arya spots the soldier who stole Needle, her sword, and wants it back. They end up inside and a fight breaks out between the soldiers and The Hound.

It’s a brilliant fight scene and reminds everyone that messing with The Hound is one of the worst ideas you can have. After killing most of them Arya plucks up the courage to join in and takes the opportunity to rescue Needle. She then uses it to kill the man who took it. The episode ends with the pair of them heading off and Arya is now in possession of her own pony.

So that’s Game of Thrones season 4 off to a fantastic start. It was a little slow at times but such a complex setup requires the time to put everything in place. We’ve got an idea now of where this season is going but no clue where it will end (or who will survive). We can’t wait for the next episode and hope it gives us chance to catch up with Bran Stark (Isaac Hempstead-Wright) and Hodor (Kristian Nairn).

Let us know your thoughts on Two Swords in the comments below as well as your hopes for the season.