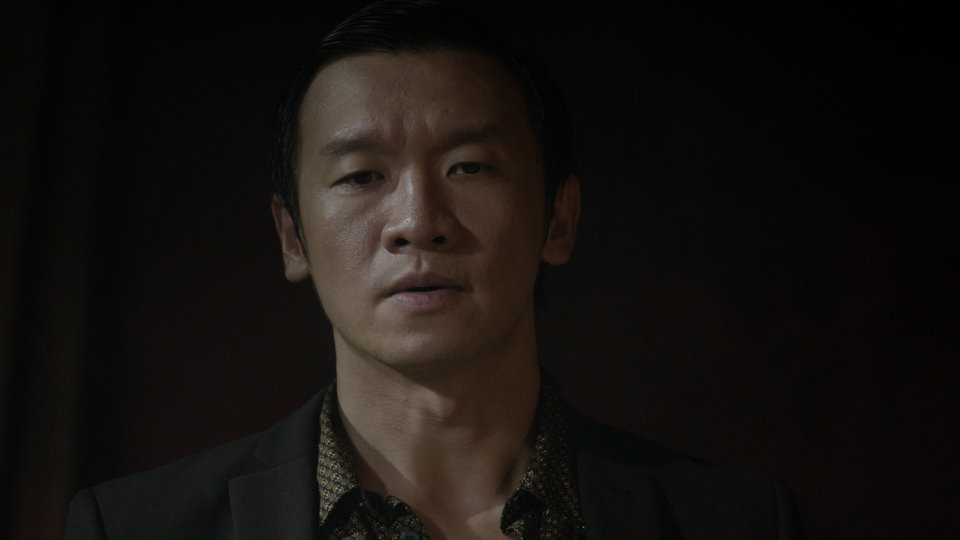 Chin Han is a familiar face to millions after impressing as Lau in The Dark Knight. His iconic scenes with Heath Ledger and Christian Bale (including a breathtaking sequence set in Hong Kong) set the tone for one of the most accomplished comic book movies of all time.

Having a Marvel Studios cameo under his belt too (in the brand new Captain America movie; The Winter Soldier), Chin Han returns with a new TV series called Serangoon Road for Sony Television. It’s a period thriller set in 60s Singapore, based around a world of private detectives, roving C.I.A agents, and colonial tension.

EF’s Jason caught up with Chin to discuss his latest TV project whilst looking back at his previous work on The Dark Knight, his thoughts on the late Heath Ledger, his cameo in Captain America: The Winter Soldier and his plans for the future.

Thanks for joining us today Chin…

Can you tell us about your latest project Serangoon Road?

Serangoon Road is a noir thriller about a detective agency set in Singapore in the 60s when it was a hotbed of political intrigue and criminal activity.

What was it about the character of Kay Song that made you want to be involved with Serangoon Road?

Kay Song is the scion of a powerful crime family. He is very inscrutable on the one hand and explosive on the other. And it is this duality that makes him so interesting to play. He’s a force of nature in an already volatile environment.

The show boasts an impressive ensemble including Joan Chen. How was working alongside her?

She brings with her a considerable body of work, not least Twin Peaks which is one of my favorite TV shows of all time, and itself a crime mystery, so it was fun for me to play off of that.

What do you look for in a role?

I generally look for complexity and tension within a character. Like Sun Feng in Contagion, a by-the-book epidemiologist who goes on to kidnap Marion Cotillard, or Lau in The Dark Knight, a mob accountant who eventually gives all of them up.

You have quite rightly been listed in ‘Asia’s 25 greatest actors of all time’ by CNNGo. How does that accolade feel?

It does feel a little premature, but more than that, I’m just grateful for the opportunity of working with some brilliant directors – Chris Nolan, Gus Van Sant, Steven Soderbergh – they may have something to do with the accolade.

Tell us about your appearance in Captain America: The Winter Soldier?

It’s a cameo, and I’m a member of the World Security Council along with Jenny Agutter, one of your greats and Robert Redford. Together we monitor the state of the world, before all hell breaks loose.

How was it working alongside Robert Redford?

It was memorable. Bob has such a magnetic presence and it’s easy to see why he’s a star, beyond his incredible good looks. He’s calm, nuanced and always brings a welcome gravitas to the set.

Can we expect to see more of Councilman Yen in the Marvel universe and is he a character you’d like to explore further?

It depends on the powers that be at Marvel but I’ve enjoyed being a modest part of this universe. Kevin Feige and Louis D’Esposito have done an amazing job with all their superheroes and truth be told, I’d love to get a crack at Dr Strange.

How did you first get involved with The Dark Knight?

I had read for John Papsidera initially and then had to present some of my past work to the producers and Warner Bros, after which Chris had another look at me and the rest was proverbial history. It took 6 weeks from auditioning to getting cast and it was the longest 6 weeks of my life.

Your scenes in the film have become iconic. During filming did you have any idea just how big a film The Dark Knight would end up becoming?

The script was stunning to begin with, it was dark and dense and I was mentally exhausted after reading it, wondering how they were going to pull this off. But after shooting the Hong Kong extraction scene and watching Heath’s transformation in the makeup chair some mornings, I felt we were onto something very special here.

What are your memories of working with Heath Ledger?

He was the first actor to welcome me on set and remained a lovely, generous and inventive artist and person throughout the shoot. He would suggest things to try like in the prison scene and on top of the pile of money where Lau meets his demise, but never at the expense of who he is acting with.

You have appeared in lots of comic-related projects – are you a comic fan and do you have a preference of DC or Marvel?

Yes, I’m a fan. I think comic-books are our modern mythology, but I don’t have a preference, just a soft spot for graphic novels.

The industry is constantly evolving, especially on the technical front, there are many more opportunities for actors now with the development of digital and hi-def cameras and platforms to show them on. However, on the human front, all the problems faced by the characters in the movie ‘Sunset Blvd’ still exist, so it has changed but I don’t know if it is easier.

I just finished a movie with Michelle Yeoh called Final Recipe about a family of talented chefs competing on a reality show. Daniel Boulud guest stars and it was good fun learning how to cook for 5 months.

Finally, what have you enjoyed most at the cinema over the past year?

I liked Gravity for its pure cinematic qualities, this was one tale that could not be told in any other medium.

Thank you for taking the time to talk to us today Chin and best of luck for the future!

Serangoon Road débuts on Wednesday 9th April 2014 on Sony Television UK  / Captain America: The Winter Soldier is out now in cinemas / The Dark Knight is available to buy from all good retailers.