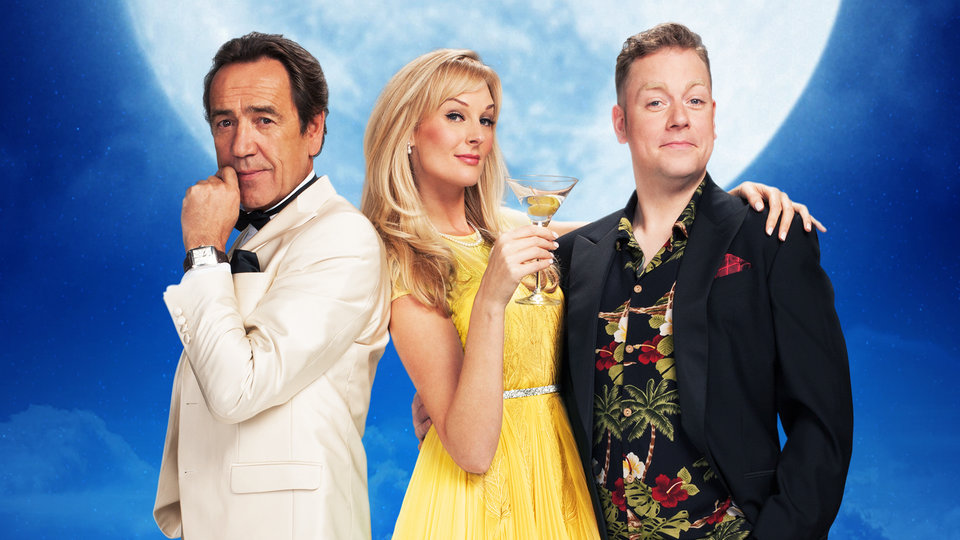 The performance is directed and choreographed by the Tony Award winning Jerry Mitchell (Kinky Boots, Legally Blonde) with music and lyrics by Drama Desk Award winner David Yazbek (The Full Monty). The UK Premiere of Dirty Rotten Scoundrels has now arrived in the West End, residing at the gorgeous Savoy Theatre in London.

This musical comedy, set on the French Riviera, introduces us to Lawrence Jameson (Robert Lindsay), a con-man of the highest order who makes his living charming the socks (and wallets) off the wealthy. He is introduced to Freddy Benson (Rufus Hound), a low-level con artist with plenty of tricks up his sleeve, who is looking to move in on his patch. The two agree on a 50k Euro wager, with the loser leaving town for good. All they need to do is swindle the money from Christine Colgate (Katherine Kingsley) a rich woman who is vacationing nearby. But what looks like a straightforward bet soon escalates into a challenge neither man sees coming.

Dirty Rotten Scoundrels is an utter joy from start to finish. It manages to hit every one of its marks with a musical comedy of consummate quality that manages a very tricky accomplishment; giving a familiar story a unique and fresh approach.

Robert Lindsay is by far the brightest spark of Dirty Rotten Scoundrels. His natural flair for theatrical comedy and his undeniable chemistry with the cast (coupled with buckets of charisma) helps Lindsay steal every scene he is in. Purely magnetic, his performance raises the bar for Dirty Rotten Scoundrels and gives the production a true sense of identity in its own right. It’s hard to believe that Michael Caine’s performance could be equalled, but Lindsay manages this easily.

Rufus Hound does very well with the imposing task of filling Steve Martin’s shoes. He works off Lindsay very well with the two clearly relishing their time together onstage. Katherine Kingsley handles the role of Christine with aplomb and captivates every time she is onstage. She easily sells the concept and makes for a very fetching love interest. John Marquez plays Lawrence’s confidant Andre and acts as the perfect foil for the suave persuasions of Lindsay and the physical madcap nature of Hound. Rounding off the principal cast is Samantha Bond as the lovelorn Muriel, who adds magic to the ensemble with a worthy performance that delights.

Artistic licence is used throughout the production, as one would expect, so this isn’t an exact translation of the movie. The blossoming relationship between Muriel and Andre for instance, is added to this interpretation and certainly works well to bring the whole story together for a stage audience. It balances out the central story and gives Samantha Bond and John Marquez ample opportunity to really showcase their natural talents for musical theatre and situation comedy.

The musical numbers are all superb with ‘Give Them What They Want’ a particular favourite. Lindsay shines here in a sequence that utilises the ensemble to great effect as Lawrence tells us the rules of conning. ‘Oklahoma?’ is a rip-roaring country tinged number that Lizzy Connolly has great fun with as Jolene whilst Freddy’s ‘Great Big Stuff’ perfectly captures the essence of the character and his monetary desires.

Perhaps the productions most heartfelt sequence finds Lawrence admitting that ‘Love Sneaks In’ with a solo number that demonstrates Lindsay’s captivating stage presence. Similarly, ‘Here I Am’ gives Katherine Kingsley a memorable entrance and ‘What Was A Woman To Do’ showcases a brilliant melancholy ode from Samantha Bond.

The production value is very high here and the perfect advertisement for what West End theatre is all about. The sets are wonderful and fully immersive, with the Hotel Lobby, Lawrence’s house and the Train Station all great working examples of effective simplicity. Ruprecht’s bedroom is a hilarious man-cave of surprises that frequently causes a chuckle with the musical number ‘All About Ruprecht’ proving to be a huge crowd favourite (thanks largely to the energy and chemistry between Hound and Lindsay).