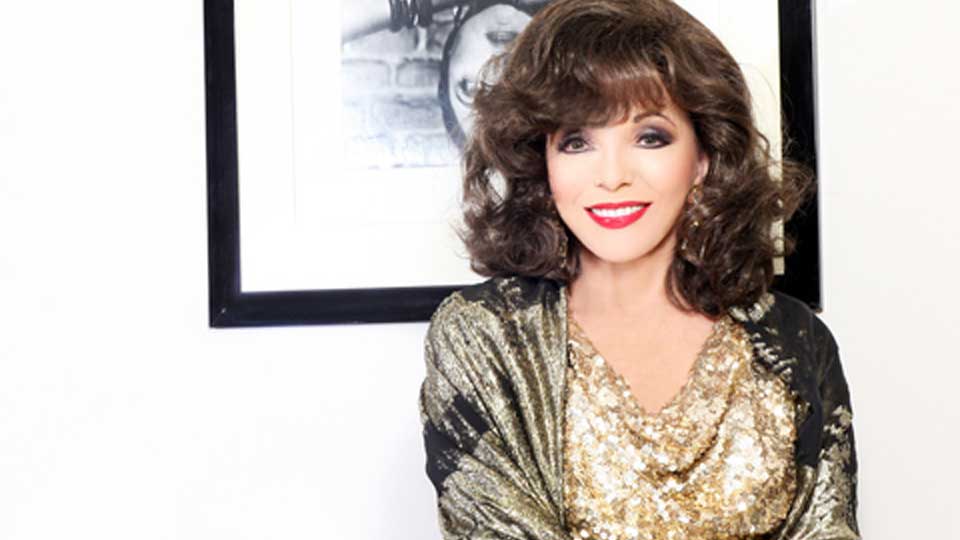 Undoubtedly one of the most enduring stars of our time, Joan Collins takes to the stage in a one-woman show revealing there’s more to her than shoulder-pads and husbands.

One Night With Joan pretty much does what it says on the tin. The glamorous actress takes to the stage to regale the audience with tales of her extraordinary life, but don’t expect too much scandal, this is more of a glossy overview than a revealing tell-all. Rushing through a happy childhood, the real fun starts when Collins makes her mark on Hollywood and the name-dropping comes thick and fast.

If you are a fan of the golden age of Hollywood you will be bowled over by the magnitude of stars Joan worked with, met or married. From Bing Crosby to Paul Newman to Richard Burton, Collins shared screen-time with some of the most iconic figures in film, it’s a shame she didn’t go into further detail on some of her experiences, but there is a time limit on the show and a restriction on how much she’s actually willing to share. Some of the classic clips are fantastic, raising nostalgia and more than a few laughs – Joan is very happy to laugh with the audience and carries a self-deprecating tone throughout. It’s actually astonishing how much work Collins racked up, but as she pointed out herself, she did have a life before Dynasty.

Collins does expand on a few salacious encounters, including some timely advice from Marilyn Monroe (who Collins supposedly beat-out for the role in 1955 breakthrough The Girl In The Red Velvet Swing) and a tense on-set exchange with the legendary Bette Davis, which saw Collins kicked across the set during filming for The Virgin Queen.

Inevitably Dynasty gets the biggest reaction of the night as Joan talks us through her heyday (which lasted a decade) where she was one of the most popular TV stars in the world. As the shoulder-pads got so big they had to walk through doors sideways and the on-screen fights got so impassioned that Collins ended up unconscious, there were lots of stories to keep the laughs coming. The clips got great reactions – especially the catfights, which will always have a cult appeal.

Joan is a consummate professional throughout. A few stumbles over the script are quickly rectified and Joan holds the audience well. There are times when things feel slightly rushed, but when you’ve lived a life like this there is a lot to pack in. The stark stage is backed with a screen and the only prop is a pointless telephone, which rings every now and again with little effect. But the audience is not here to marvel at set designs so it’s of little significance.

The night ended with a short Q&A chaired by her husband Percy and Joan left the stage with the audience wanting more. And that was the problem, the show didn’t go deep enough. We wanted to know more about the real Joan Collins. While she name-dropped with alarming frequency, she rarely gave away much more than we already knew. It was a fun and interesting night and a real glimpse into a household name but those looking for a deeper insight may leave disappointed.