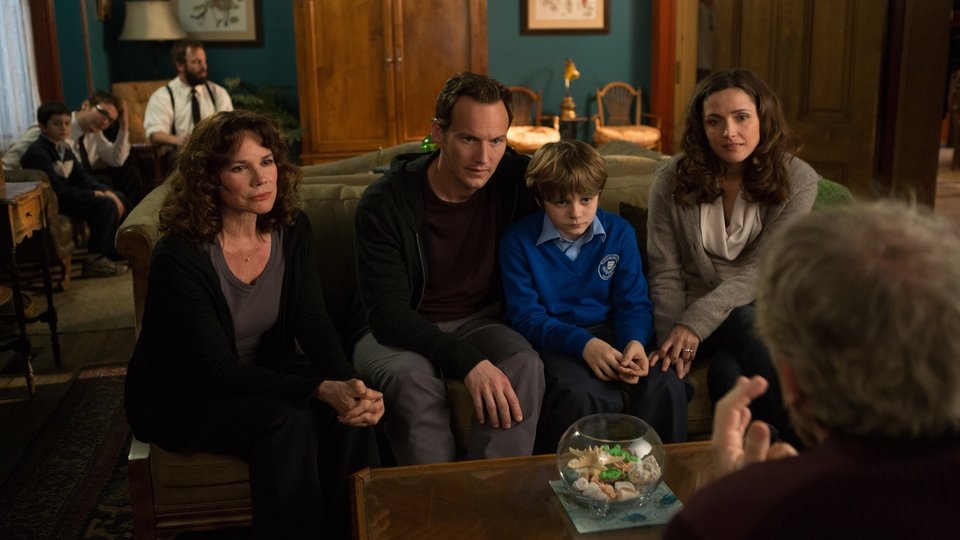 The Lambert family are still struggling to piece their lives back together after the shocking events that led to their son Dalton (Ty Simpkins – Insidious) falling into a coma. Renai (Rose Byrne – Bridesmaids) wants a change of scene so they move into Josh’s (Patrick Wilson – The Conjuring) mother’s house. But before long, the ghostly disturbances start up again and cause the Lamberts to look into their past for answers.

The first Insidious was a real landmark in horror that gave audiences a decent, lasting fright along the way. In many ways, Insidious: Chapter 2 has become a victim of its own success having ushered in a new breed of horror like The Conjuring and Sinister. Indeed The Conjuring, a far superior horror in every department, was only released on DVD a few weeks ago so the impact of Insidious 2 already feels dampened. It also doesn’t help that the script veers a little too close to comedy at times. Whilst it’s entertaining, it’s not what Insidious 2 should be aiming for, especially after such a terrifying first film.

Writer-director James Wan is hot property at the moment. Having cut his teeth on the classic genre piece Saw and been behind the lens for The Conjuring and the first Insidious, Wan knows horror. His next gig might be Fast and Furious 7 but he’s established himself as the go-to guy for modern scares. So it’s slightly disappointing to see Insidious: Chapter 2 play the obvious card all too often. There are scares here that wouldn’t be out of place in a TV movie, and then there are scares that genuinely raise the hair on the back of your neck. It’s quite a mixed bag but ultimately it’s an entertaining ride.

The cast are all great with Patrick Wilson handing in a great dual role. He’s equally convincing on both sides of the coin and gives Insidious: Chapter 2 a real sense of uneasiness. Rose Byrne continues to shine in every film she’s in, and is a joy to watch here. The two share a great chemistry that disintegrates as the movie progresses, with a very ‘Shining’-esque vibe bringing out the best from both actors.

Elsewhere there are strong supporting turns from Barbara Hershey as the mother, Steve Coulter as a paranormal investigator and the ever reliable Lin Shaye as Elsie. Lindsay Seim does a great job as a younger Elsie too and is front-and-centre during the films wonderfully chilling opening sequence. Co-writer and horror fan-favourite Leigh Whannell is always entertaining as one half of the ghost-busting duo from the first movie, whilst Angus Sampson dutifully obliges for the physical comedy scares.

It may not be as scary second time around but Insidious: Chapter 2 still does provide plenty of ghostly hi-jinks. The start is definitely stronger than the finale but the story is suitably different to keep you on your toes. It uses its environment very effectively (the house is classically creepy) and there are some decent jumpy moments. It’s just a shame that the Darth Maul-esq demon from the first film doesn’t show up here. Surely that’s one scare that warranted another outing. Perhaps in Insidious 3 then? And make no mistake; there will be an Insidious 3.

Vote for your favourite horror movie franchise of all-time!