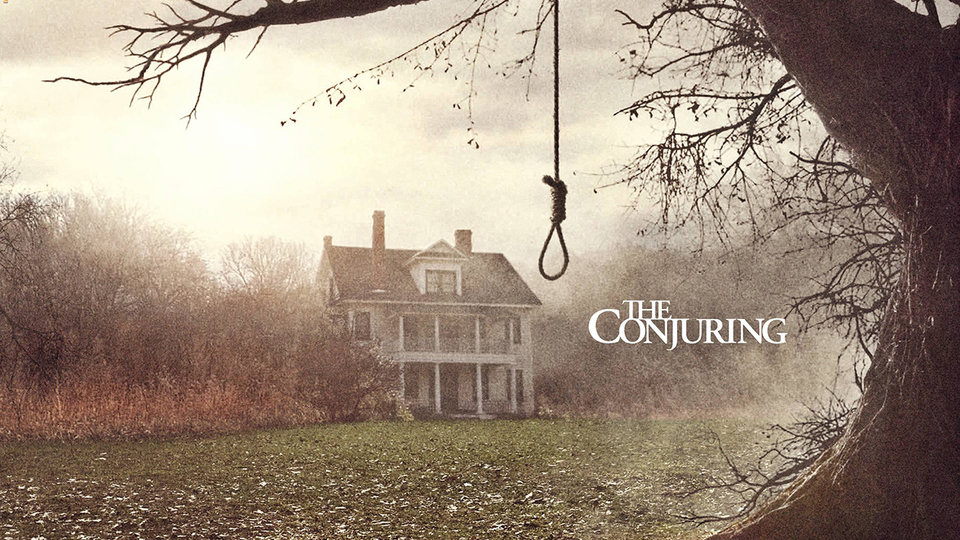 Roger Perron (Ron Livingston – Office Space), his wife Carolyn (Lili Taylor – the Haunting) and their daughters all move into a brand new house, bought for a good price at auction. It needs some work but for the most part, they look to have found a real family home. That is, until strange occurrences plague them all at night. Before long, these supernatural incidents prompt Carolyn to track down renowned husband and wife demonologists Lorraine (Vera Farmiga – Up In The Air) and Ed (Patrick Wilson – Watchman) Warren. They start to investigate the hauntings and uncover an evil even they have never encountered before.

The Conjuring is a glorious throwback to that golden era of 70’s American horror that terrorised our childhoods and moulded a generation’s perceptions on what genuine horror should be about. The set-up is familiar but the execution is both fresh and fierce, with numerous jumpy moments and stellar performances throughout.

From the title card (that’s a wonderful, ominous homage to films like The Omen) down to the ‘based on true events’ blurb that distinctly opens such fare, The Conjuring is a horror film made by people who genuinely love the classic era. But more importantly, you’ll love it just as much because it’s a film the delivers on almost every count.

The seventies are brought brilliantly back to life with this movie. The costume design is beautiful as is the painstaking set design. Every frame feels like it’s been taken from an actual period piece movie, not one made to look like a 70’s film. The use of sound is also effective in creating a true sense of dread. Director James Wan (who did such a great job with Insidious in 2011) once again utilises sound and score to create a delicious, uneasy state.

The casting of The Conjuring is as perfect as you can get, with each and every name doing a stellar job in bringing this ghastly tale to light. Leading the film and handing in yet another breakout performance is Patrick Wilson. It’s a wonder Wilson hasn’t become a household name yet – that must surely be a matter of months now. He is consistently the best thing in all of his movies and The Conjuring follows suit. He looks the part too, with a killer 70’s wardrobe to boot.

Wilson also shares a wonderful chemistry with the other standout performance in the film, Vera Farmiga. The talented actress really comes into her own here, with a performance devoid of cynicism or fear. Both Wilson and Farmiga avoid turning Lorraine and Ed Warren into your typical horror clichés but instead craft a proper, believable and powerful duo to trust in. She works brilliantly with Patrick Wilson to really convince, not just as demonologists but as scholars and ultimately, a loving couple who feel that it’s their calling from God to help these people. Lorraine and Ed Warren are a very well written duo, thanks to the words of screenwriting brothers Chad and Carey Hayes, and the powerful leading turns of Patrick Wilson and Vera Farmiga.

The supporting cast are all solid too with Lili Taylor and Ron Livingston very convincing as a husband and wife terrorised in their own house. It’s particularly good to see Livingston back in a mainstream movie; the popular Office Space star is an underused talent in Hollywood. Lili Taylor does very well as an increasingly traumatised mother and sells the frightened aspects of this story well. All of the young actresses who play their daughters also deserve a mention for doing such a convincing job being scared witless.

Much like in Insidious, the inclusion of a ghost-busting team to help Lorraine and Ed Warren solve this case is thoroughly engrossing and entertaining. Shannon Kook and John Brotherton do a great job as a student and police officer who aid in the investigation of the hauntings and provide a lot of the films more light-hearted moments.

The Conjuring isn’t afraid to craft some big set pieces too. The children’s hand-clapping game is used to brilliant effect and culminates in two very creepy sequences. The shadows in the girl’s bedroom is a nightmarish scenario that’s very well paced and acted by it’s young cast whilst the finale really ups the ante for scares and effects that echo the final scenes of The Exorcist. Throw in an excellent opening sequence (with the scariest looking doll you will ever see) and you have a movie that knows exactly how to affect its audience in the right way.

If there is a gripe, it’s that The Conjuring isn’t as scary as it could have been. Ordinarily I’d be upset by this but I genuinely feel I got what the filmmakers wanted to achieve here. This is as mainstream as a horror can get without it selling out. For that, Warner Bros and all those involved should be commended for proving that you can make a financially viable but genre-specific movie that works on both levels. The first Paranormal Activity may still remain the benchmark for truly frightening modern horror but The Conjuring joins the ranks of Sinister and Insidious as a fine example of how to craft an effective, decent horror film with old fashioned scares at its core.