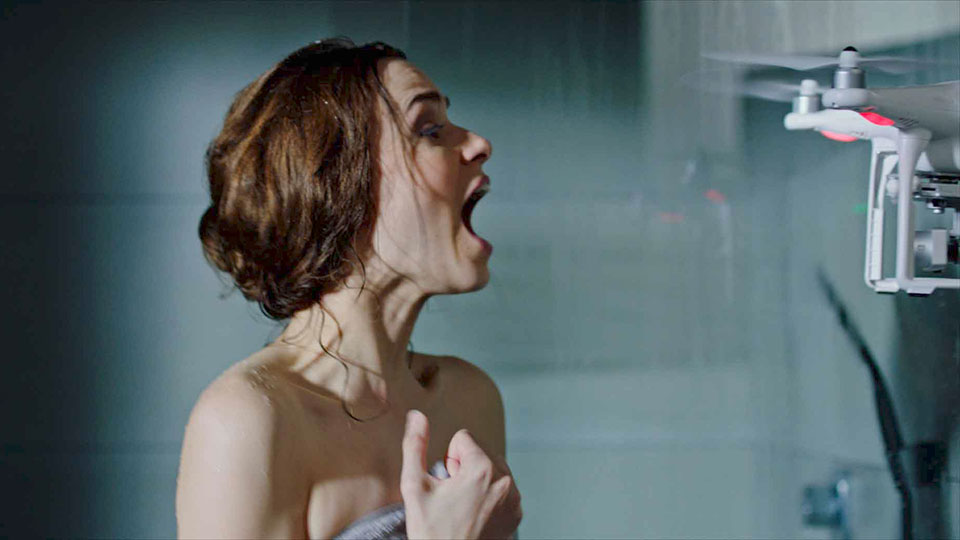 After moving into a new home Rachel (Alex Essoe) and Chris (John Brotherton) find a drone and decide to keep it – a fatal mistake. At first it’s just the drone being in odd places or the feeling of being watched. But soon Rachel realises that something is wrong when people begin to die. Possessed by a serial killer called The Violator, the drone has only one focus – Rachel and it won’t allow anyone to get it its way.

So, while waiting for the movie to start all I could think about was the scene from Forgetting Sarah Marshall where Russell Brand and Jason Segal laugh about a movie concept where mobile phones kill people. Brand’s Aldous Snow poses the important question “Why would a mobile phone kill anyone, it doesn’t make sense…how can a mobile phone have an agenda?” The Drone gets around the issue of machines having a lack of agency by going down the possessed route rather than AI. So right from the off, you have moved from any sense of real life setting to complete ridiculousness and it means to take you there.

This film is like a mixture of the Lawnmower Man, Transcendence and the episode of Buffy the Vampire Slayer where they scan a demon into a computer and then it escapes via the internet. Added together you have a slightly 80s-esque b-movie, the silly idea that human consciousness can be turned into binary code and some quality punning.

It takes a while for the movie to get going and the death count to go up. During this time you can marvel at the beautiful house Rachel and Chris move into and how incredibly quickly they unpack and get the pictures on the walls. The movie does try to give you a few quick jumpy moments with people popping up, including the caricature naughty neighbour Corrine (Anita Briem). Anita Briem puts in some quality facial expressions in her solo shots and plays up to and over the top with the character who you instantly mark for death.

John Brotherton’s tone of voice is spot on delivering the lines with conviction while also leaning into the silly dialogue, making it clear you are meant to find it funny. Rachel is a mixed bag of both the crazy irrational woman trope and the only person who seems able to fend off the tiny domestic drone. I went through phases of wanting her to die and cheering on her. There are quick appearances by Rex Linn and Gonzalo Menedez in law enforcement roles which add some weight to the cast. The weakness to me was the beginning, they killed off The Violator in the first 3 minutes – this storyline should have had more time and more menace.

In the end this movie is easy to watch, the people you think will die, die. The ways in which they die are funny, slightly improbable, but not excessively violent. Ignore the questions like who is charging the drone, how does it open doors, why didn’t the police track the drone used by a serial killer and why do they keep the drone in their bedroom, and just surrender to the glowing red ‘eyes’ of the drone.