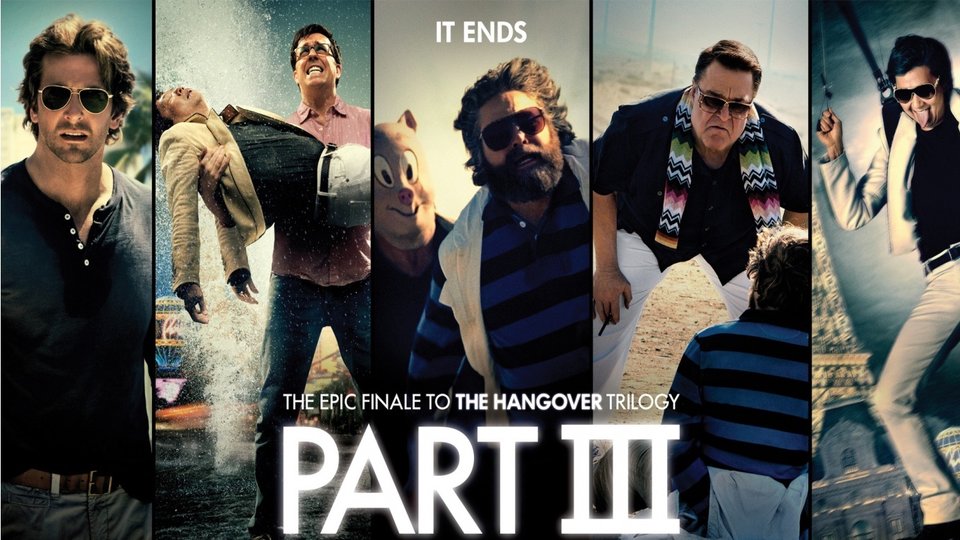 The Hangover Part 3 marks a sad time for Warner Bros as it waves goodbye to yet another mega-bucks franchise (after farewells to both Batman and Harry Potter). As a big fan of the first and second Hangover movies, I was filled with unabashed anticipation for this third instalment. After its cracking trailer, I wanted to love The Hangover Part III just as much as the rest but sadly it’s a disappointment. Gone are the quick-witted gags, the outlandish circumstance and the energetic pace. It’s replaced by a very pedestrian story that offers very little in the way of adventure or excitement. It’s not a bad film by any stretch, just a very uninspiring one that isn’t brave enough to take big risks.

Much like in Fast & Furious 6, the makers have messed around with a winning formula in an attempt to freshen things up. Whilst it is necessary and important to reinvigorate your franchise, you shouldn’t do it at the expense of the films heart and soul. Genuine laugh-out-loud comedy is hard to find in The Hangover Part III. That’s not because the jokes fall flat, (they mostly land where they should), it’s that the film has become too serious and dark. The sheer lunacy of the first two movies has disappeared and it’s a crying shame.

The cast are all fine with Bradley Cooper leading the line well. Ed Helms seems a bit subdued this time around (although that’s probably down to the script) whilst Heather Graham’s role is nothing but a blink-and-you’ll-miss-it cameo. That character really should have been explored in more depth. John Goodman does make everything better and he is his usual, excellent self.

Zach Galifianakis is probably the best of the bunch with Alan at his (un)usual best. His dynamic with Ken Jeong, who is given a far bigger role this time around, is what forms the basis of this story. The Alan/Chow friendship does have some funny moments with their best gag appearing in the very end, post-credit sequence. Alan also finds love in the form of Bridesmaids favourite Melissa McCarthy.

The Hangover Part III ends this saga on a whimper. But it’s quite remarkable we even got a trilogy out of this concept in the first place. The characters will be sorely missed though and it’s a shame that we won’t get to go on any more crazy adventures with the Wolf-pack in the near future. However, I’m not entirely sure that we won’t get a Hangover reunion in 10 years time. Franchises rarely lay dormant in this day and age, especially if they make you money.

Jason Palmerhttp://www.entertainment-focus.com
Jason is a film contributor for Entertainment Focus (EF) bringing you the latest news and reviews from the movie world.
Previous article
Anchorman 2: The Legend Continues review
Next article
The Conjuring Blu-ray review

Watch: Lady Gaga and Bradley Cooper wow with Shallow performance at the Oscars

A Star is Born Blu-ray review