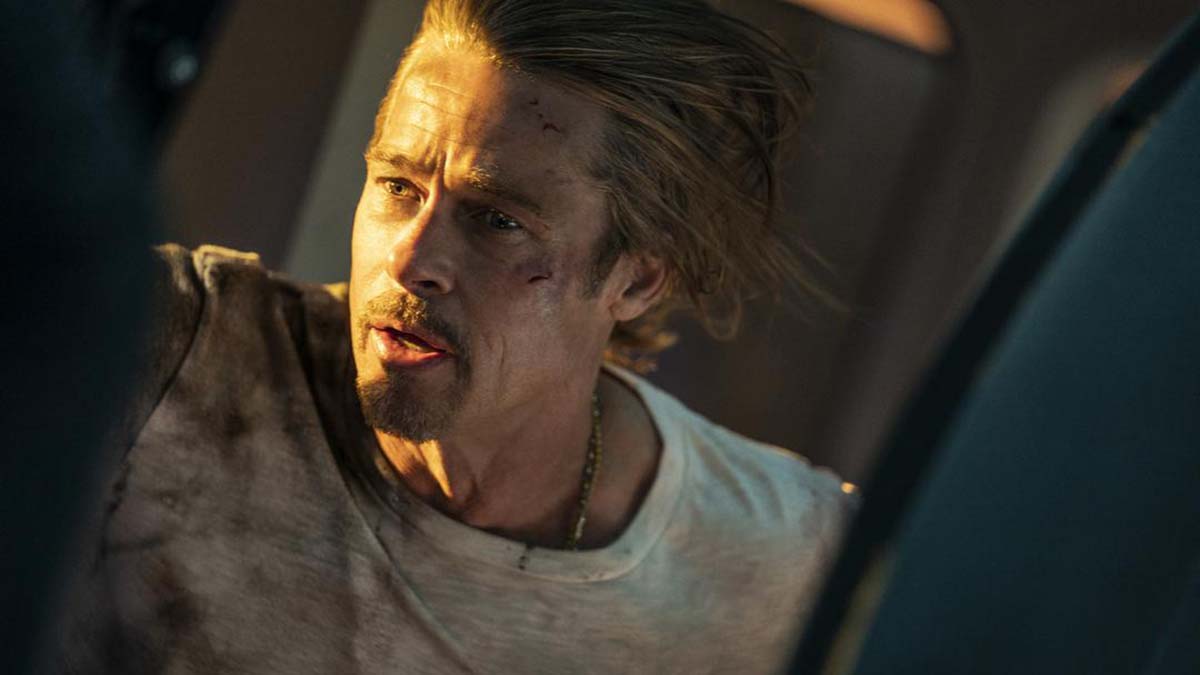 Ladybug (Brad Pitt) is given an assignment by his handler Maria (Sandra Bullock) to retrieve a suitcase from a fast-moving bullet train travelling through Japan. Once onboard the train, Ladybug discovers that what should be a simple mission is going to be anything but as he becomes entangled with a number of other assassins. As Ladybug tries to fulfil his mission, he winds up in a fight for survival as he, along with the assassins, try to figure out what’s really going on.

‘Bullet Train’ is based on the book by Kôtarô Isaka and before it even reached cinemas, it’s been criticised for ‘west-washing’ the story, replacing many of the original Japanese characters with actors from across the globe. For his part, Isaka has deflected the criticism stating that his characters were ‘maybe not even Japanese’ in the first place. While the cast is largely international, there are strong turns from Japanese actors Andrew Koji as Kimura and Hiroyuki Sanada as The Elder, along with small but memorable roles from ‘Heroes’ star Masi Oka and ‘The Boys’ actor Karen Fukuhara.

That criticism aside, ‘Bullet Train’ is a high-adrenaline thrill-ride that isn’t aiming to be an award winner. The whole point of the film is to deliver an entertaining popcorn action flick that you can turn your brain off and simply enjoy; and that it achieves with ease. Brad Pitt leans into the comedic side of his abilities as the newly enlightened Ladybug who is trying to find his inner peace away from the violent life he’s led to that point. With Maria in his ear throughout, a chemistry-filled mostly voice role from Sandra Bullock, Ladybug tries to navigating the fast-escalating situation while keeping his hands on the briefcase he’s been sent to retrieve.

Much of the fun of ‘Bullet Train’ comes from the colourful cast of characters. Brian Tyree Henry and Aaron Taylor-Johnson are scene-stealers as British assassins, Lemon and Tangerine, while Joey King is seriously impressive as the innocent-looking but deadly Prince. Hiroyuki Sanada brings gravitas as The Elder, the father of Andrew Koji’s Kimura, and Benito A Martinez Ocasio aka reggaeton sensation Bad Bunny, puts in a convincing and entertaining performance as the vengeful Wolf.

For me, ‘Bullet Train’ succeeds in being a fast-paced action film with plenty of engaging fight sequences and some inventive set-pieces. Trapped within the confines of the train, for the most part, director David Leith brings a visual flair that makes the film really pop on the big screen. You could argue the film is style over substance, and you’d have a point, but honestly that didn’t bother me. I accepted I was strapped in for the ride and I enjoyed it.

With a handful of surprising cameos and plenty of charm, ‘Bullet Train’ delivers what you want it to. Did it have shades of “Smokin’ Aces”? Absolutely but thanks to the strong cast and the witty script, I didn’t mind one bit. Brad Pitt clearly had fun as Ladybug and his energy is infectious as he bounces off his cast mates. In the final stretch ‘Bullet Train’ goes for broke and is wildly over-the-top but by that point I was having enough fun not to care. Not every film needs to be a serious Oscar contender and it’s about time the popcorn flick made a proper return to the big screen.