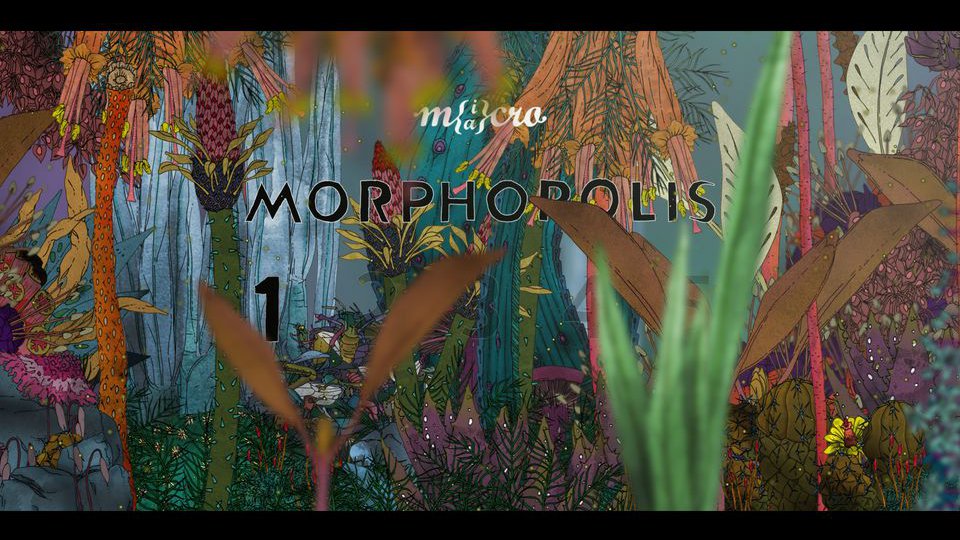 Morphopolis is a point and click adventure of sorts from indie studio Micro Macro. The game was designed by Dan Walters and Ceri Williams who are both architects. They have mentioned that games such as Year Walk, The Tiny Bang Story and Machinarium were inspiration for the title.

The game is quite unlike anything we’ve played before and features a mix of point and click, puzzle and hidden object gameplay. You play as an aphid grub on an adventure to rescue your companion. Along the way you’ll undergo changes as well as parasitically inhabiting larger insects in order to progress.

As you can tell it’s an unusual game and right from the start it forces you to experiment. It actually took us a couple of minutes to get off the start screen into the game. Once the game begins there are no tutorials or text to read to help you along. You pretty much need to figure out everything yourself.

Holding a finger on the screen allows you to move your insect around. Tapping on scenery, objects and other insects is usually what’s needed in order to work out what to do next. If you get really stuck there is a help icon that can be used once every few minutes to point you in the right direction.

The game features five levels with each larger than the last. Progress normally means exploring to find out what is required of you. This is often collecting a certain number of items which are hidden around the environment. Usually some of these are easy to find but the last few can be hard to spot at first.

Usually after performing a few tasks the game will present you with a puzzle that must be solved. Some of these are quite challenging and all require you to work out what you are expected to do. Most frustratingly the game doesn’t have a save feature so if you get really stuck and quit it you need to play through the level you were on again to get back to where you were.

The lack of direction is likely to frustrate some players but we found it intriguing. The art is beautiful and the hidden object parts really make you work. The music is also wonderful and we found it stays in your head long after playing.

Morphopolis isn’t the most exciting game around but we found it strangely relaxing and we were hooked until we beat it. Some players will be through it in a couple of hours while others will get stuck for ages. If you like to work things out yourself and enjoy solving puzzles then Morphopolis is well worth a look. The game will also appeal to insect fans and the art will be enough to tempt many to pick it up.