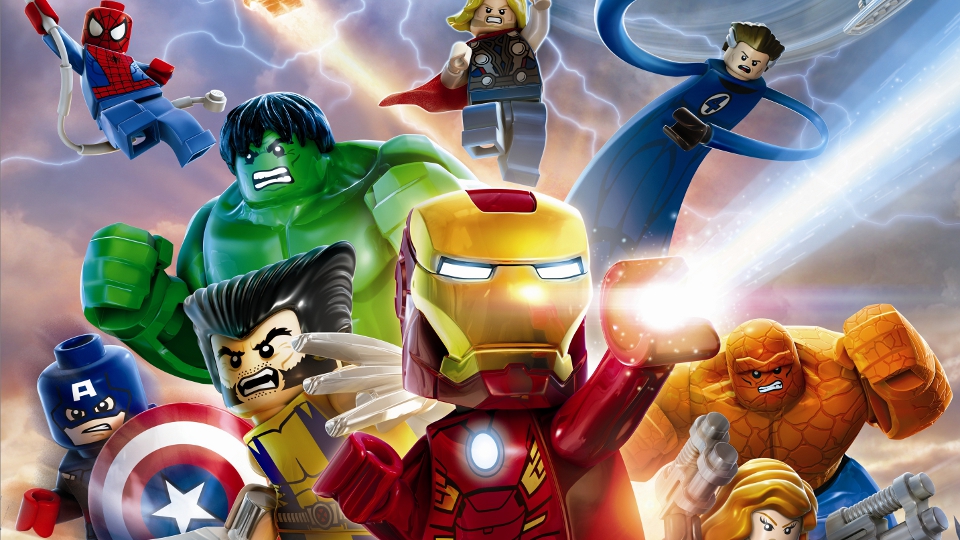 Each time Traveller’s Tales releases a new LEGO game they somehow manage to top the previous ones. Having created games based on Star Wars, Indiana Jones, Harry Potter, Pirates of the Caribbean, Lord of the Rings and Batman it’s always fun to try and guess what their next game might be. Their latest effort is a take on the Marvel Universe and not only is it the best LEGO game to date it’s also the best Marvel one too.

If you’re a fan of the LEGO games then you’ll feel instantly at home as much of the game feels familiar. There are a large number of characters to unlock (over 150!) which are a mix of superheroes and villains. Pretty much every Marvel Super Hero you can think of is present including Iron Man, Thor, Spider-man, The Hulk, Wolverine, Deadpool and Captain America. Similarly there are plenty of villains on offer too including Loki, Magneto, Doctor Octopus, Sandman and Dr. Doom.

Each character has their own special abilities so for example Iron Man can fly and shoot lasers from his hands. Spider-man comes with his spider-sense and web-slinging abilities allowing him to swing around the screen. LEGO Marvel also features big figures such as The Thing, Abomination and The Hulk.

At the start of the game Silver Surfer crashes on Earth and his board breaks up into cosmic blocks. Naturally these are just what Dr. Doom needs to build his Doom Ray of Doom, Loki has plans of his own and the heroes just want to stop them falling into the wrong hands. The pieces are scattered all over the world which is a perfect excuse to set levels in a variety of different locations.

The game is most fun in co-op and it starts you off with Iron Man and The Hulk. Both are a delight to play. Iron Man is ridiculously cool but The Hulk manages to be more fun. Leaping around the screen shouting HULK SMASH! while destroying everything he can get his giant fists on is endless fun. He can also pick up and throw large objects and doing so makes him feel even more awesome. At times you need to calm him down to turn back to Bruce Banner before getting him enraged again to turn back to The Hulk.

Combat is similar to in previous games but the different abilities of the characters helps keep it interesting. You are rewarded with studs for smashing stuff up and defeating enemies and there is a combo meter that rewards you if you take successive enemies down quickly. The more studs you collect the better because these can be used to unlock new characters.

Another benefit to having so many different characters and abilities is that these can be used in unique ways to solve puzzles. The LEGO games have always been family friendly so the puzzles aren’t too taxing but more variety helps keep things interesting. Big characters like The Hulk are needed to smash or throw large objects, Iceman or Captain America can put out fire, Mr. Fantastic can change his shape into something useful and flying characters like Iron Man can get to hard to reach places.

The story behind the game works well and having so many characters in the same game just works. As will the other LEGO games Marvel Super Heroes is also packed with humour. You’ll find yourself smiling most of the time you’re playing and even laughing out loud on plenty of occasions. Fans of the characters and of the recent Marvel films will particularly enjoy the game.

In between missions there is a whole other game to explore. New York City provides the setting and is an open world for you to explore in Free Play. You can start by sky diving off the S.H.I.E.L.D Helicarrier down into the city. From there you are free to go off exploring and completing side-missions. There’s always something to do and you’ll likely spend longer playing around here than in the main missions.

Graphically LEGO Marvel manages to be the best looking LEGO game to date. The characters and their animation are the standout features but a lot of care has also been put into their voicework. The actual actors that play the characters in the films aren’t used but the developers have ensured that they all sound like you’re expecting them to.

If you’re a Marvel fan then you simply need to own a copy of LEGO Marvel Super Heroes. There’s something here for everyone from casual to hardcore fans and the game is packed with replay value. Traveller’s Tales have managed to improve upon all their previous titles and also craft the best Marvel game we’ve ever played. We can’t wait to see what they tackle next.