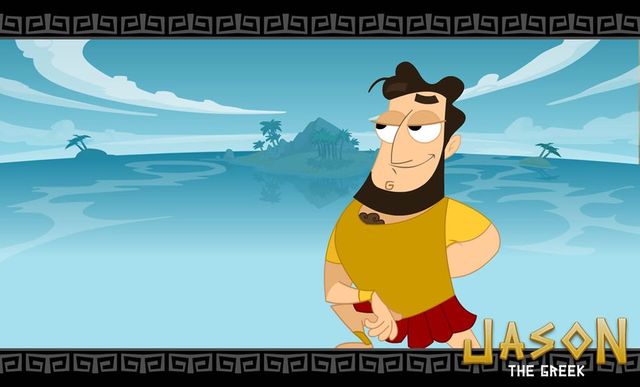 Every day we get inundated with information on new gaming projects that are looking for backers on various crowdsourcing sites. It’s actually not possible to cover them all but we do cover what we feel are the most promising ones when we can.

We’ve only just heard about a new point and click adventure called Jason the Greek from industry veteran Kris Fosh of one man indie studio DreamFever. It’s currently in its last weekend of looking for backers on Kickstarter in order to meet its funding goal.

We caught up with Kris to find out more about the project.

Tell us more about yourself and how you ended up in the gaming industry?

Hi! I’m Kris Fosh – I’ve always had a huge passion for gaming and animation in general but the long story short here is that once upon a time I was living in Japan and a friend emailed me asking “Do you still draw? Only the games company I work for needs a 2D artist.” When I got back I had an interview and test with the head of graphics and I started working for Jagex a few weeks later as the 2D ‘team’.

One thing I will always remember about that interview was that on the top of my cv was pencilled ‘the best of the bunch’. After I noticed that I felt pretty good about my chances… 😉

I didn’t realise it at the time but this was really a big break for me, Jagex was in a growth stage where there were massive opportunities and weeks would go by when you couldn’t believe that people would pay you for having so much fun!

You use a very distinctive animation style, do you watch cartoons and if so, what’s your favourite?

I do love cartoons and animation – 2D in particular. The style itself took a long time to settle on as I’ve used many over the years and wanted to create something that people would like the look of, a style that would lend itself to the fun feel of the game and its tongue in cheek spoofing story.

While my favourites change all the time – from the Bruce Timm Batman series to Futurama – I would say that the pink panther ‘Inspector’ series was a major influence on the game, both in style as well as humour.

Jason the Greek: The Ladies of Lemnos looks to be quite slapstick in nature, what made you create a game based on the legend and what was your inspiration?

Growing up I just fell into the Greek myths. It was something we were taught in school and it just captured my imagination – the heroes, the villains and especially the monsters. Hercules is still my favourite Disney, hands down! There are many inspirations that have led to this style of retelling, though, from the Star Trek influences to the innuendo that has been the stable of British humour for so long.

In the end, I guess I am making a game that I really enjoy to play and – fortunately – it looks like theres plenty of people out there that like the same thing I do!

Who will be voicing the protagonist?

Right now I’m doing some casual auditions although I have has some real interest from the extremely talented Cyrus Nemati. Cyrus picked up the game some time ago and I’ve added one of his voice tests in my kickstarter updates. We’re not quite there yet but we’re close!

Do you have plans on bringing the game to other platforms?

Absolutely – while initially it’s most likely that the game will be focused at desktop I want to have it ported onto tablets as soon as possible as I think the iPad is really what’s rejuvenating this genre of game. Visionaire, the engine I am using, currently doesn’t support mobile so I will probably have to look to other avenues, such as Unity for the cross platform potential.

If you want to go cross platform, why not do that from the start?

It’s really a combination of time, budget and skill set. Visionaire is a purpose built engine that makes it possible to make professional quality adventure games – such as the awesome Deponia series. It has meant that working solo on the game has been possible purely because of the program / engine.

To have to build my own custom engine would take a huge amount of time and I have neither the time nor the programming skill to make something that could be considered professional. I want to bring the best possible game to market I can and – right now – Visionaire is the engine for me.

Hopefully they will bring mobile support in in the future, fingers crossed!

How long can players expect each chapter to be?

Really hard to say, it really depends on how you play. If you cruise through you probably wont find more than an hour’s game play but if you enjoy it, search for the little easter eggs and the different routes available to you – I want to give the player reason to replay the game time and again to try different solutions to the game.

Plus, you can be killed so some players might have a shorter go than others!

You can be killed? You don’t see that in many adventure games?

That’s true which is really why I put it in as you shouldn’t be able to walk around stealing everything in sight or leaving a princesses abode before she wakes without consequences…. 😉 You’ll just have to use your wit, charm and cunning to dodge such eventualities!

Assuming you hit your KickStarter target, when can backers expect the game’s first chapter to be available?

My target is for summer next year, probably late summer as this is usually a good time to launch games but, really, it will launch when its ready. The great thing about kickstarter is that its helped me build a community of people interested in the game – no matter what, I want to keep these fans in the loop on the future of Jason whether I hit my target or not!

You’re a one man studio, what difficulties do you find yourself running into when working alone?

As I mentioned before, it does restrict me slightly in what I can achieve but I guess my major issue is that you lose out on that team decision making, multiple ideas and minds helping to build a single product is what can often make a game really amazing. Luckily for me there’s a great community of adventure game fans out there more than happy to share their opinion.

What are your thoughts on the current state of gaming, with the free-to-play, microtransaction/ IAP (in app purchases) driven gaming experience everyone seems to be embracing?

I think freemium gaming / micro transactions have their own place for certain in gaming, there’s no denying their success but for me it MUST bring something relevant to the game but also be balanced. If you can destroy an opponent purely because you paid a few dollars for an unachievable weapon you’ve lost that balance and players are just going to get upset.

As with all things in gaming you need to find a balance although with JTG there will be a single cost for the game, although I will most likely put out a free demo.

What’s your favourite game (and why) and what’re you currently playing?

Ha, favourite game… I’m probably supposed to say Monkey Island 3 but really it would be any of the Hector Badge of Carnage series as I just love the style and humour in there, it really makes for a great time waster. Right now, though, I’m just playing Jason trying to squash all the bugs I can find!

After the Jason the Greek trilogy, what can we expect to see from you next?

But first I need to finish chapter 1, Jason The Greek: The Ladies of Lemnos!

To find out more about the game and to try the demo you can visit the offical Jason the Greek website. If it looks like your kind of game then check out the Jason the Greek Kickstarter campaign to pledge your support before it’s too late.

In this article:Jagex, Jason the Greek, Kickstarter, Kris Fosh