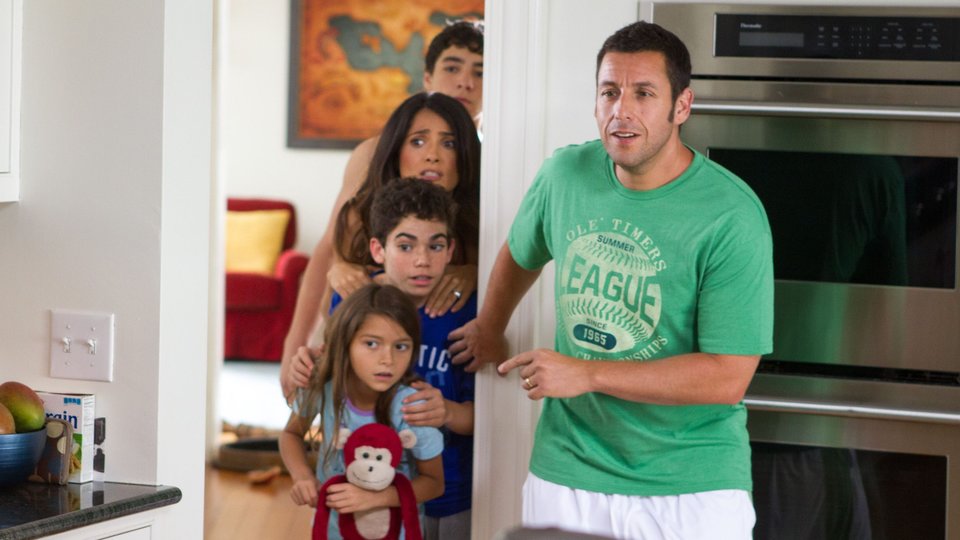 The boys are back! Adam Sandler, Kevin James, Chris Rock and David Spade return for a second gathering of childhood friends in the comedy Grown Ups 2, available December 2nd on Blu-ray™ and DVD with Ultraviolet™ from Sony Pictures Home Entertainment.

Lenny (Sandler) has relocated his family back to the town in which he and his friends grew up and soon realises that he can try to escape the hustle and bustle of the city, but between old bullies, cops on skis and a group of rowdy local college kids, sometimes crazy follows wherever you go. The returning all-star cast also includes Salma Hayek (Here Comes the Boom, Frida), Maya Rudolph (Bridesmaids) and Maria Bello (TV’s “Touch”), who are joined by NBA star Shaquille O’Neal, Nick Swardson (Jack and Jill), Alexander Ludwig (The Hunger Games) and Milo Ventimiglia (TV’s “Heroes”, upcoming Grace of Monaco).

Exclusive to the Blu-ray are three behind-the-scenes featurettes, giving viewers an inside look at the tyre scene with David Spade, the making of the Feder house, and the cameos throughout the film. Both the Blu-ray and DVD come with seven deleted scenes and the “Shaq and Dante: Police Force” featurette, chronicling the silly relationship between Shaq and Dante.

The all-star comedy cast from “Grown Ups” returns with some exciting new additions! After moving his family back to his hometown to be with his friends and their kids, Lenny (Adam Sandler) finds out that between old bullies, new bullies, wild bus drivers, cops on skis and 400 costumed party crashers, sometimes crazy follows you.

To be in with a chance of winning 1 of 3 Blurays, simply answer the question below.

Grown Ups 2 is out on Blu-ray and DVD from December 2.