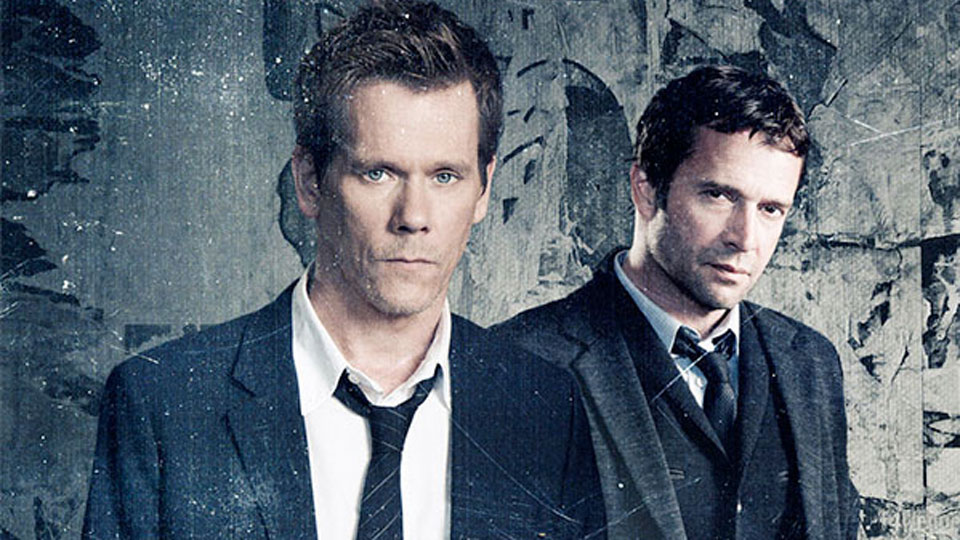 Former FBI agent Ryan Hardy (Kevin Bacon) is the man responsible for putting serial killer Joe Carroll (James Purefoy) behind bars, following the murder of 14 women years earlier. When Carroll escapes, Hardy is pulled back into the FBI to assist agents Mike Weston (Shawn Ashmore) and Debra Parker (Annie Parisse) in locating him and putting him back behind bars. Soon a cat-and-mouse chase unfolds as it becomes clear that Carroll has spent his years behind bars forming a cult to carry out his evil deeds. As the body count increases, Hardy is locked in a race against time that sees Carroll target his ex-wife Claire (Natalie Zea) and son Joey (Kyle Catlett). Carroll is also hellbent on exacting revenge on Hardy for putting him behind bars in the first place.

The Following was a ratings smash with television viewers but got a rougher ride from the critics when its first season aired earlier this year. Created by Kevin Williamson (Scream, The Vampire Diaries) and executive producer Marcos Siega (Dexter, Damages), the show is a fast-paced thriller in the vein of 24. The show’s narrative relies on unexpected twists and turns which are part of the reason people loved it but also why the show got picked apart. Some criticised it for being unrealistic and convenient in places but to be honest you could criticise pretty much any show for that couldn’t you?

What we loved about The Following is we genuinely had no idea what was going to happen next. More often than not we were left with our jaws on the floor during episodes and some of the cliff-hangers were pretty amazing. Part of what makes the show so good is how creepy and sinister it all us. You have no idea who is one of Carroll’s followers and who isn’t which keeps you guessing and looking out for clues throughout. The show is remarkably violent for a US mainstream network such as Fox and there truly are so moments that will leave you speechless.

Carroll’s murder spree and subsequent plans for his cult are under-pinned by the works of Edgar Allan Poe. He uses references from Poe’s work to galvanise his followers and tease the FBI as to his next move.  The things that he gets his followers to do are really quite scary and the whole concept will give you goosebumps. The fact that no character is safe is incredibly unnerving and will keep you on the edge of your seat.

As well as the great storytelling that unfolds over the course of the season, it’s the cast that really brings the show to life. Kevin Bacon is excellent as Ryan Hardy and the role will do to his career what Jack Bauer did for Kiefer Sutherland. Hardy is a hot-headed former FBI agent who has been left with a pacemaker following a face-off with Carroll the first time round. He also has ties to Carroll’s wife which becomes one of the major conflicts throughout the first season. James Purefoy is equally fantastic as the smooth-talking but deeply sinister Joe Carroll. He plays the role with subtlety letting his emotions simmer under the surface rather than burst onto the screen.

Outside of the two main characters the support cast is stellar. Valorie Curry is perfectly cast as the shape shifting Emma who is Carroll’s most devoted follower whilst Nico Tortorella brings great emotion as the conflicted Jacob who finds himself involved deeper with the cult than he expected at the outset. Shawn Ashmore proves his acting worth as rookie FBI agent Michael Weston and is one of the highlights of the show. Annie Parisse gives the show some balance as FBI agent Debra Parker who keeps Hardy at bay whilst pushing the investigation forward. We also want to give special mention to the wonderful Natalie Zea who is incredible as Carroll’s ex-wife and really gets an opportunity to shine in the second half of the season. We could literally watch her in anything!

The boxset is packed full of extras boasting over 3 hours of additional material. There is an array of featurettes exploring the cast and crew as well as the idea behind the show. There’s an audio commentary on the final episode of the season and an extended cut of the pilot as well as deleted scenes.

The Following has definitely had its critics but for us it was the kind of show you can lose yourself in and get hooked. Sure it’s a bit silly in places and you have to put logic to one side at times but who cares when a show is this good? The cast is absolutely stellar, the storyline completely gripping and Kevin Williamson masterfully weaves his way through a genre he knows better than anyone else. The Following is jam-packed with action, scares, thrills and a whole lot more and we just can’t recommend it highly enough. Ignore the nay-sayers, we’re already counting down to season 2.