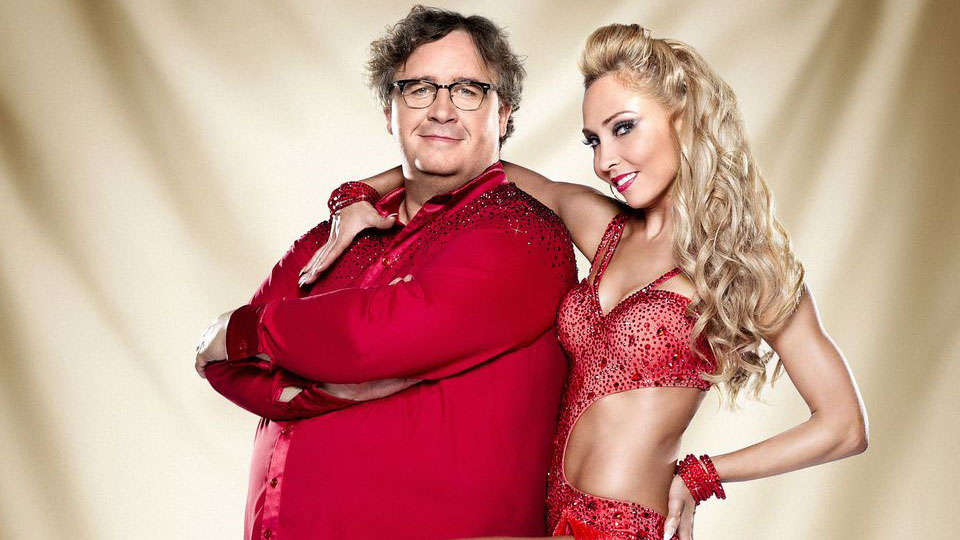 We’re one week away from the quarter final of Strictly Come Dancing 2013 and it’s so close this year we honestly have no idea who is going to win the competition.

Last week rugby hunk Ben Cohen hung up his dancing shoes and departed along with his professional partner Kristina Rihanoff. Mark Benton and Iveta Lukosiute survived the dance-off again for a third time. The judges were pretty hard to please last week not giving a great amount of praise to any of the couples.

Tonight the remaining 7 couples danced to secure their place in next week’s quarter final. The show opened with a nautical themed group dance featuring the Strictly professionals and the celebrities. It certainly kicked the show off in style.

The first couple on the dancefloor tonight was Casualty star Patrick Robinson and his partner Anya Garnis. Last week’s Viennese Waltz wasn’t a huge hit with the judges and Patrick was pretty heavily criticised. This week Patrick and Anya danced the Charleston and they knew they needed to pull something pretty special out of the bag to stay in the competition. Could a Chitty Chitty Bang Bang inspired dance do it?

Len said it was ‘full of flash, bang, wallop’ and called the dance ‘fantastic’. Bruno said it was ‘Chitty Chitty Bang Bang driven by Lewis Hamilton’. Craig said he thought it was full of character and extremely fast before labelling the routine ‘spectacular’. Darcey called it ‘fast and wild’.

Patrick and Anya scored 38 out of 40 from the judges.

We felt sorry for anyone following that rather amazing Charleston but if any of the celebs is up for the challenge it was Coronation Street star Natalie Gumede. With her partner Artem Chigvintsev, Natalie scored well last week for her Tango but the judges told her it lacked drama. During the week Artem took Natalie to a trapeze class to get over her fear of lifts ahead of their Dreamgirls inspired American Smooth. Did the training pay off?

Bruno said Natalie ‘danced like a true Dreamgirl’ and admitted he ‘lived every moment’ with her. Craig said it was ‘strong, sharp and clean all the way through’ but told Natalie not to look down before she entered lifts. Darcey said the fluidity was amazing before calling it ‘stunning’. Len said the dance got lost in the performance and told Natalie he needed to see more in-hold.

Natalie and Artem scored 36 out of 40 from the judges.

Actor Mark Benton and his partner Iveta Lukosiute were next to dance. Last week they narrowly avoided leaving the show after claiming victory over Ben Cohen and his partner Kristina Rihanoff. Mark admitted he was pleased with his performance last week and said he was in shock to still be in the competition. Tonight Mark and Iveta were dancing a Lion King themed Samba. Did they do enough to stay out of the dance off?

Craig said that the dance was technically Mark’s best to date. Darcey said it was a steady Samba but called Mark the ‘cheeky King of the show tonight’. Len said Mark is a ‘great big bundle of joy to watch’. Bruno said Mark’s performance was great and told him he knows how to sell a dance.

Mark and Iveta scored 29 out of 30 from the judges.

Popstar Sophie Ellis-Bextor was the next to perform tonight. Last week Sophie and her partner Brendan Cole were criticised for their romantic Rumba which we think deserved a much better score than it got. Tonight Sophie and Brendan were dancing the Viennese Waltz and to help Sophie cope with the spinning, Brendan took her to a fairground. Did their The Sound of Music themed dance win the judges over?

Darcey told Sophie that her ‘style was stunning’ and but warned her to watch the back of her neck as it was letting her down at points. Len told Brendan that he’d choreographed a wonderful routine and told the couple well done. Bruno said he enjoyed that it was a classic Viennese Waltz and told Sophie that she’s ‘great’. Craig said the chemistry between Sophie and Brendan was ‘brilliant’.

Sophie and Brendan scored 36 out of 40 from the judges.

Model Abbey Clancy and her partner Aljaz Skorjanec were next to dance with a Saturday Night Fever inspired routine. Last week Abbey and Aljaz won over the judges and this week they were dancing the Salsa. During the week the couple went to karaoke to get into the party spirit. Did their fun excursion help them on the dance floor tonight?

Len said there was ‘fever in the ballroom’ and told Abbey her performance was great. Bruno called Abbey a ‘disco diva’ and said he couldn’t tell the difference between her and the professional girls. Craig said it was ‘A-MAZ-ING’. Darcey said she was mesmerised and told Abbey she’s finally oozing confidence in the Latin.

Abbey and Aljaz scored 40 out of 40 from the judges giving them the highest score of the season so far.

The penultimate couple to dance tonight was Ashley Taylor-Dawson and his partner Ola Jordan. Last week Ashley was criticised for his head placement and he’s consistently scored 35 out of 40. For Musical Week Ashley and Ola danced the Rumba with an Aladdin theme. Was the week that Ashley finally broke through 35 points and got his best score yet?

Bruno said it was ‘exotic’ and said Ashley made Ola look wonderful. Craig said it needs a bit more hip action but admitted he loved the routine. Darcey told Ashley ‘well done’ and Len said Ashley came out and performed telling him he’s on a roll.

Susanna Reid and her partner Kevin Clifton were the last couple to dance tonight with their Singin’ In The Rain inspired routine. Last week Susanna was criticised for her Cha Cha and she admitted it wasn’t really her dance. Back to ballroom tonight and Susanna and Kevin were dancing the Quickstep. During the week Kevin drafted in Susanna’s sons to help her train. Could Susanna get back to the top of the leaderboard?

Craig said the footwork was sloppy and told them they were out of sync. Darcey said Susanna captured the role perfectly and pointed out the amount of dance content in the routine. Len called it a ‘blockbuster’ of a Quickstep. Bruno said Susanna has zest and energy calling her ‘a musical star’.

Susanna and Kevin scored 33 out of 40 from the judges.

Tune into Strictly Come Dancing’s results show tomorrow night at 7.20pm on BBC One and BBC One HD to find out which couple will be leaving the competition. Check out pictures from today’s dress rehearsal in our gallery below: