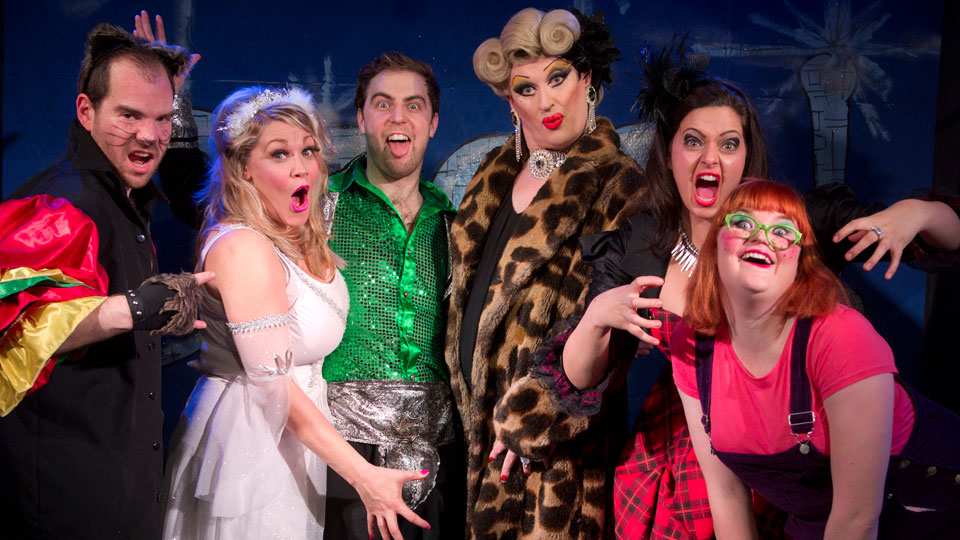 Dick Comes Again does what it says on the tin. And it does it very well.

Adult pantos are tricky. If you have an unwilling audience, half-hearted cast and age-old jokes, things can easily fall flat. Luckily Dick Comes Again is a relentless, often hilarious gem which comes about as near the knuckle as you can get without a graze (or a slander case).

The almost nonsensical plot (something about a Soho club, chastity belt and a randy Dick) is purely a vehicle for smut, songs and very adult gags – and when it’s done this well, who are we to argue? There are two main things this show is to be commended for – Stuart Saint’s quick-fire script which never lets up and a totally committed cast. If just one of the actors here wasn’t in on the joke or fully committed to the absurdity, the audience would go the same way and there’s not a chance of that happening here as every actor seems to be revelling in the sheer stupidity (that’s a compliment by the way)!

All of the performers are worthy of mention here – Nick Read is strangely sexy as the Cat, Laura Hyde displays excellent comic timing and gusto as Alice Fitznicely and Laura Cullick holds things together with an engaging charm as the fairy. Paula Masterson sinks her teeth into the villain of the show and cackles and hisses with a real passion, offset by some nice deadpan moments, and Dave Bibby as the titular character is simply hilarious, with his tongue firmly in cheek.

The show is headlined by Soho stalwart Dusty O as grand dame Sofanda Cox. Dusty is the queen of the grimace, gurning at the audience through her sharp quips and tongue-lashings. But Dusty doesn’t get off lightly, being described as “Bette Davis. After the stroke”. Thankfully she gives as good as she gets and creates some real highlights. Just a note, don’t sit on the front row if you are averse to becoming part of the show.

The panto is peppered with a few songs – the female cast can really sing. As ever, the sound in the studio of Leicester Square Theatre is very unforgiving and harsh on the singers (even a touch of reverb could warm things up a little) but all three women pull through and sound great.

This show really isn’t for everyone. Leave your taste level at the door and don’t go expecting a huge production as the best you’ll get is a costume change and some dry ice. However, for filthy unadulterated fun this really does tick all of the boxes – and then some.