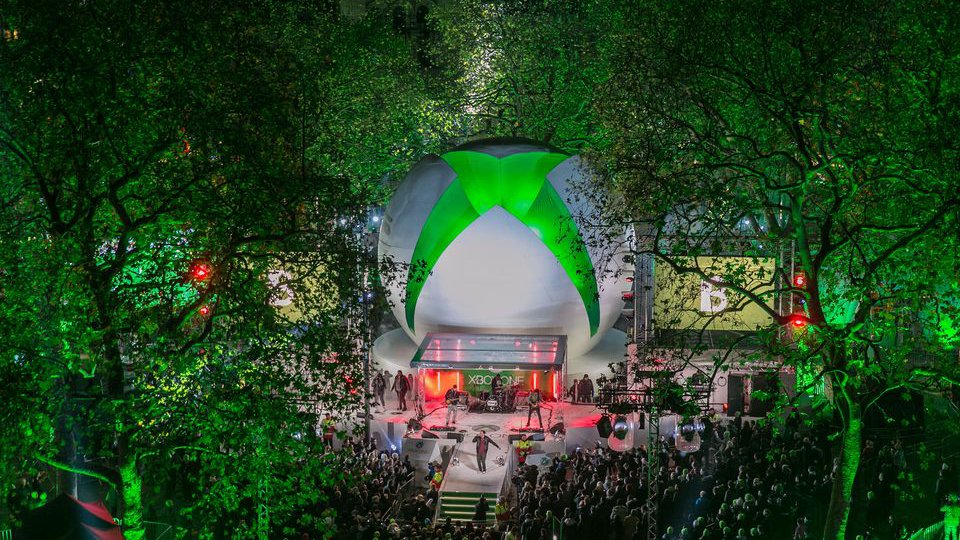 Leicester Square officially became Xbox One Square on Friday for the launch of Xbox One. The biggest week in video game history kicked off with live outdoor performances from chart toppers Plan B and Katy B, and the midnight opening of a pop-up GAME store in a 10,000 ft Xbox One gaming zone in London’s Trocadero.

Leicester Square came to a standstill as stars from TV, film and music welcomed a new generation in gaming and entertainment, along with thousands of fans. A giant three-dimensional Xbox nexus dominated the centre of Leicester Square, which was transformed into a gaming and entertainment universe for the day. The very best of British game developers – who now represent one of the country’s most successful exports – were also on hand to showcase their new releases.

Zombies from Dead Rising 3 roamed the streets alongside a Roman legion from Ryse: Son of Rome. The Stig drove through the crowds in a McLaren supercar from Forza Motorsport 5 with headline performer Plan B, while Premiership footballer Andros Townsend competed against fans on FIFA 14 as part of the two-hour live extravaganza.

GAME, the UK’s leading games retailer, then opened the doors to its pop-up store in the Xbox One Gaming Zone in The Trocadero, which once again becomes the home of video games for one weekend only. Hordes of fans waited excitedly for midnight at 500 stores up and down the country.

[quote by=”Phil Harrison, Corporate Vice President, Interactive Entertainment Business, Microsoft EMEA”]We’re proud and excited that Xbox One is going to be the biggest launch in Xbox history. Xbox One is a complete, all-in-one system which has the best games, the best online service in Xbox Live, the best entertainment experiences and is built for the future. With the strongest line-up of games we’ve ever seen for a new console, pre-orders from fans across the UK are at unprecedented levels.

The games industry is evolving and growing fast, and we are proud to have so many British developers and creators helping to drive the new Xbox One era.[/quote]

The UK currently spends more on video games than on any other form of entertainment. At over £1.77 billion, UK games sales outpace cinema, DVD and music sales.

Xbox One is now on sale in the UK at £429.99 RRP, and boasts the biggest ever roster of launch titles – including Forza Motorsport 5, Dead Rising 3, and Ryse: Son of Rome exclusive to Xbox One alongside the latest titles from the biggest gaming franchises including FIFA 14, Call of Duty: Ghosts , Battlefield 4 and Assassin’s Creed: Black Flag.

Xbox One is the only console that lets you play your favourite games, watch TV shows, movies and music, surf the web, and talk with your family and friends via Skype. And only on Xbox One can you instantly switch between all of your entertainment with the sound of your voice.

Xbox One is also now on sale across the world following simultaneous launches in cities including New York, Sydney, Paris, Berlin and Madrid.

In this article:GAME, Jason Bradbury, Jonathon Ross, Katy B, Leicester Square, Microsoft, Plan B, The Stig, Xbox One, Xbox One Square