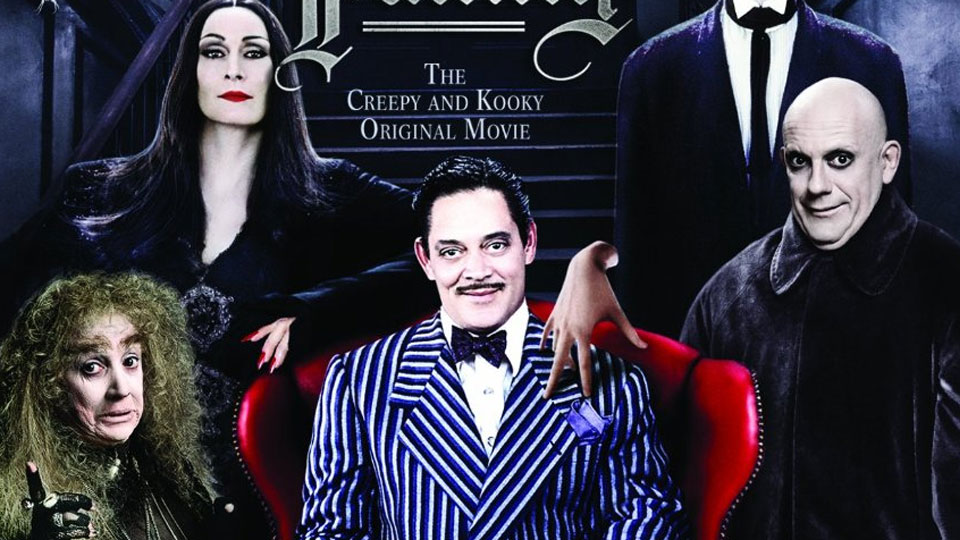 The Addams Family movie was originally released in 1991. Based on the classic cartoon of the same name, the film was made for a modest $38 million and went on to take over $191 million at the worldwide box-office. On its original theatrical run the film may have wowed audiences but it received a mixed reception from film critics. 22 years on, the film is very much a family favourite and has just been released on Blu-ray for the very first time.

The Addams Family tells the story of Gomez Addams (Raul Julia), his wife Morticia (Anjelica Huston), their children Wednesday (Christina Ricci) and Pugsley (Jimmy Workman), and their Grandmama (Judith Malina). The kooky gothic family find their lives turned upside down when Gomez’s long-lost brother Fester (Christopher Lloyd) returns after a 25-year-absence. Unbeknownst to the family Fester is actually a man called Gordon whose mother teams up with the Addams Family lawyer to steal their fortune. As Gordon does his best Fester impression, the family becomes suspicious realising that Fester may not actually be back after all.

After all these years The Addams Family is still a fun family movie that you can enjoy over and over again. If you take it for what it is, the movie is a light-hearted comedy/drama with plenty of great moments and performances. What’s so good about The Addams Family is how truly bonkers it is. The comedy is based in the absurdity with the family far removed from reality. Their Frankenstein’s monster-like butler Lurch and stray hand Thing add to the creepier side of their nature. You also get a brief glimpse of their hairy relative Cousin It.

Raul Julia and Anjelica Huston really do bring the characters of Gomez and Morticia to life faithfully and their chemistry on-screen is magnificent. Christina Ricci is wonderful as twisted daughter Wednesday tormenting her brother Pugsley at every opportunity. It’s incredible to think that this one of Ricci’s first movie roles.

The real star of the movie though is Christopher Lloyd who is simply bonkers as Gordon/Fester. He throws himself into the role with gusto and is a real joy to watch. He may not appear on our screens all that frequently now but in the 80s and 90s you couldn’t escape him. He’s a gifted comedy performer and a very versatile actor.

Unfortunately the only extra feature on this newly released Blu-ray is the original theatrical trailer for the movie. It would have been nice to see some behind-the-scenes footage or featurettes about translating the movie to the big screen.

The Addams Family does exactly what it’s supposed to; it’s entertaining, very funny and a whole lot of fun. What more could you want from a family movie? We have very fond memories of seeing the film the first time round and we enjoyed it just as much 22 years on. They simply don’t make family movies like this anymore and that’s such a shame.