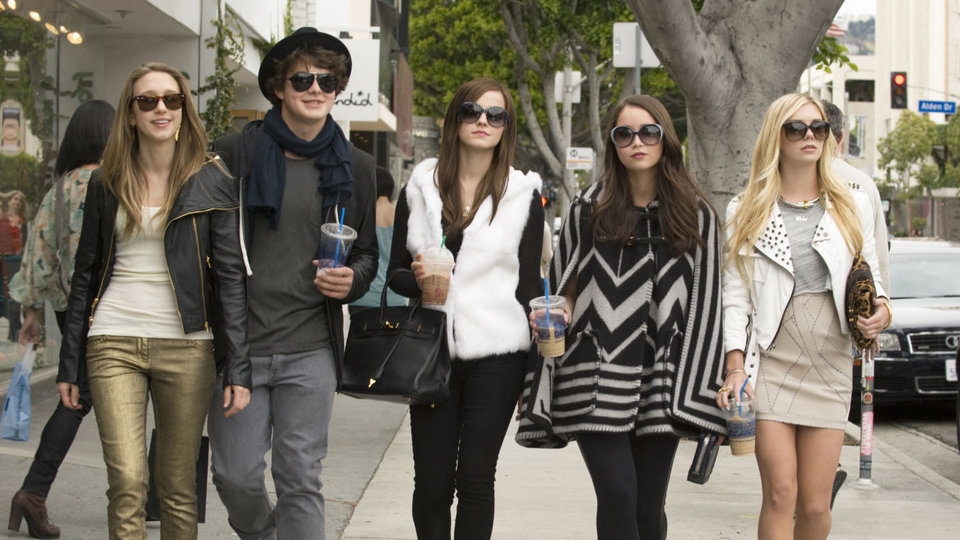 After moving to a new school, Marc (Israel Broussard – Flipped) makes friends with IT girl Rebecca (Katie Chang – A Birder’s Guide to Everything). The two hit it off instantly and soon become best friends. Rebecca is frequently bored with life and takes to petty theft to spark her interest. She coaxes Marc along for the ride too and soon they are targeting bigger stings and bolder, more famous victims. Using the internet to gage when a high-profile celebrity is out of town, Rebecca, Marc and their friends break into their homes to steal handbags, dresses and jewellery. Soon this pastime turns into an obsession.

The novelty factor surrounding The Bling Ring is strong, especially since it’s based on actual events and features the celebrity likes of Paris Hilton. It’s a decent exposé into the lives of the IT generation who are brought up with no respect, vapid interests and who dine on celebrity news for spiritual nourishment. But that’s where the novelty ends. It’s fascinating for awhile but it soon descends into just watching spoilt brats play with expensive things. That’s the story though, and the makers have done a good job bringing that story to the screen – it’s just all a bit boring when all is said and done.

The Bling Ring has moments that wear the undoubtedly stamp of Sofia Coppola’s visual style. She knows how to shoot people and situations in a very cool and genuine way – the break in at Audrina Patridge’s house for instance is filmed particularly well as are the quieter moments when the teenage thieves try on their new clothes and accessories. But it’s not enough to keep you hooked and ultimately you are just waiting for them to all get their comeuppance.

So it’s a competently-constructed and visually sound movie for all intents and purposes. It’s just the plot that feels very tiresome after the first 30mins. Being based on actual events does somewhat limit the scope and direction of the script but it still leaves The Bling Ring feeling as hollow as its characters, which is a shame.

The performances are all excellent with Israel Broussard and Katie Chang doing particularly well as the main leads. Emma Watson continues to shine after Harry Potter and hands in yet another impressive turn, especially after her stellar work on The Perks Of Being A Wallflower. Leslie Mann is on-hand to play a trippy American mom as only she can whilst Bush frontman Gavin Rossdale impresses as a nightclub owner with eyes for stolen goods.

The Bling Ring has enough about it to be an entertaining watch, if just to see how this real-life crime plays out. It’s also fascinating to get a peek into the excessive lifestyles of these targeted celebrities (Paris Hilton’s house is as bonkers as you’d imagine). But ultimately, this is a film that you won’t need to revisit again. It’s a watchable piece of fluff that’s as thin as the attention spans of its protagonists – perhaps that’s the most fitting tribute to be gained here.