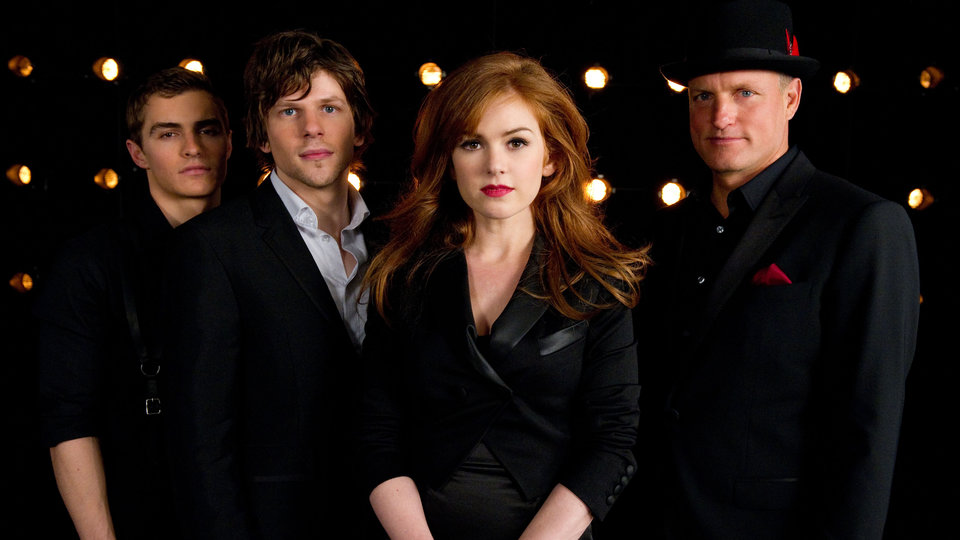 A group of very different magicians are drawn together by an unknown benefactor who trains them up to be a massive Vegas act called The Four Horsemen. They pull off a remarkable trick during a headline show where they transport an audience member to his French bank whilst taking all the money from the vault. They then distribute the money to their audience which amazes the crowds and confuses the authorities. Enter Detective Dylan Rhodes (Mark Ruffalo – Avengers Assemble), who is tasked with exposing the Four Horsemen before they pull off yet another heist.

Do you believe in magic? The producers of Now You See Me certainly hope so as they try and give a new spin to a tried and tested formula. It doesn’t take long for Now You See Me to turn into a simple heist movie but it poses a lot of good conundrums that makes this journey interesting. But interest soon wanes once you figure out that the script doesn’t actually have any answers to those intriguing questions.

Style over substance is perhaps too harsh a criticism to be levelled at Now You See Me but after some solid foundation work, the end pay-off just doesn’t excite. And the auditorium-wide laughter that greeted the final reveal didn’t help matters. It’s biggest mistake was introducing us to these very interesting individuals but never exploring their characters fully, with just a passing nod to the surface of their characters.

Mark Ruffalo is always reliable and he does what he can to elevate the script. He is given beautiful support in the shapely form of Mélanie Laurent as an Interpol agent who may or may not have a secret agenda. The two have a good chemistry even if the obvious love angle feels forced.

Woody Harrelson deserved a much bigger role, especially since he is the comic relief of the film whilst Dave Franco is woefully underused. Isla Fisher is good as the sole female member of The Four Horsemen but again, her role is too lightweight to make a true impact.

The films has some major acting heavyweights in Sir Michael Caine and Morgan Freeman. The Dark Knight trilogy stars seem to have fun as opposites who find mutual benefits in bringing down The Four Horsemen. But Morgan Freeman does feel like he’s turning into Bruce Willis of late – by attaching his name to anything and everything. It’s not one of his best movies but he still commands your attention whenever he’s on-screen.

Now You See Me is a fun but ludicrous watch that never quite lives up to its strong opening. With a great cast and some memorable moments, it’s still worth a view but the twist at the end is one leap of faith too far. Misdirection is the name of the game. Sadly blind faith isn’t enough to make Now You See Me a must-see movie, it’s more of a mild distraction whilst something better happens elsewhere – much like one of The Four Horsemen’s tricks.