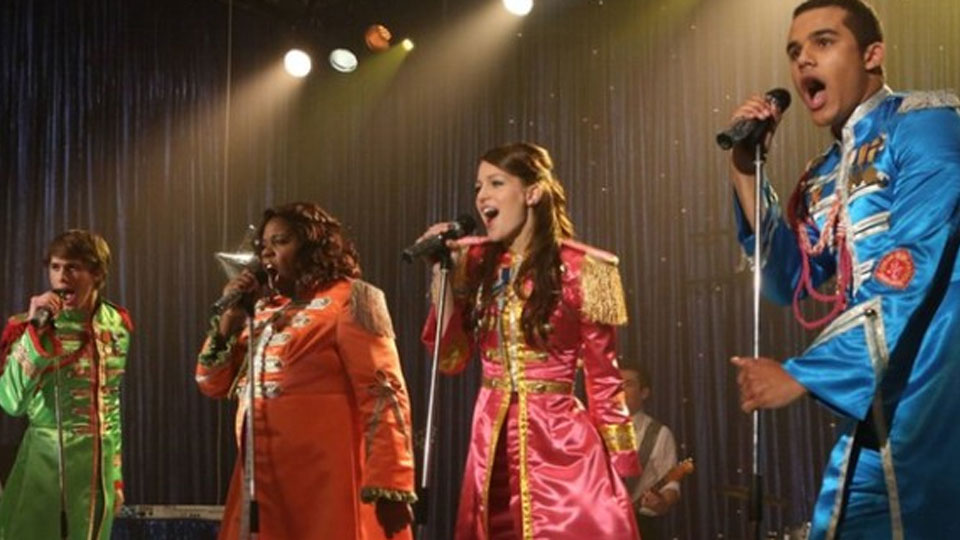 Glee is now into its fifth season and it’s amazing to think that they haven’t tackled The Beatles yet. After dedicating episodes to Britney Spears, Madonna and Lady Gaga, we’re surprised it’s taken them as long as it has to get round to The Beatles. The first two episodes of the fifth season paid tribute to the iconic Liverpudlian band and to celebrate the episode a soundtrack has been released featuring 14 tracks.

As always with Glee if you love the show you’ll love the cast’s version of these classic songs but if you’re a Beatles purist then you’ll likely rather have your ears hacked off with a rusty knife. We’re on the side that loves Glee and we’re always interested to see how the cast reinterpret the songs they cover. Glee Sings The Beatles opens with one of the strongest covers from the double episode with Lea Michele (Rachel) singing Yesterday. Michele is the strongest singer in the show and everything she puts her voice to is simply magic. Her interpretation of the song is spine-tingling especially as the lyrics are fairly fitting with the recent loss of boyfriend Cory Monteith who played Rachel’s love interest Finn in the show.

The soundtrack jumps around the history of The Beatles covering the most iconic songs from their careers. Darren Criss (Blaine) covers All You Need Is Love which in the show featured in a scene where his character proposed to on/off boyfriend Kurt whilst Kevin McHale (Artie) and Becca Tobin (Kitty) lament on secret love on You’ve Got To Hide Your Love Away. A Hard Day’s Night gets an all-female makeover by Lea Michele and Naya Rivera (Santana) and is one of the highlights on the soundtrack.

Our favourite moment comes on the acoustic Here Comes The Sun which is sung by Naya Rivera and Demi Lovato (Dani). The song was a pivotal scene in the second episode of the season where Rivera’s Santana began dating newcomer Dani. Their interpretation of the track is delicate and emotive and their voices work really well together.

Elsewhere on the soundtrack the cast come together to sing The Beatles’ signature hits Let It Be and Hey Jude. Darren Criss, Chord Overstreet (Blaine), Jacob Artist (Jake) and Blake Jenner (Ryder) perform the uptempo I Saw Her Standing There, and Overstreet has a solo moment on the beautiful Something.

The Glee cast are never going to better the originals but we think they did a pretty great job with this catalogue of songs. What people often forget is that Glee is responsible for introducing a younger generation to classic songs from both the charts and the stage. Surely putting attention on classics such as the hits of The Beatles can only be a good thing? Whilst the show has been confirmed to end after its sixth season, we’re sure there’s plenty more great music to come before it bows out.