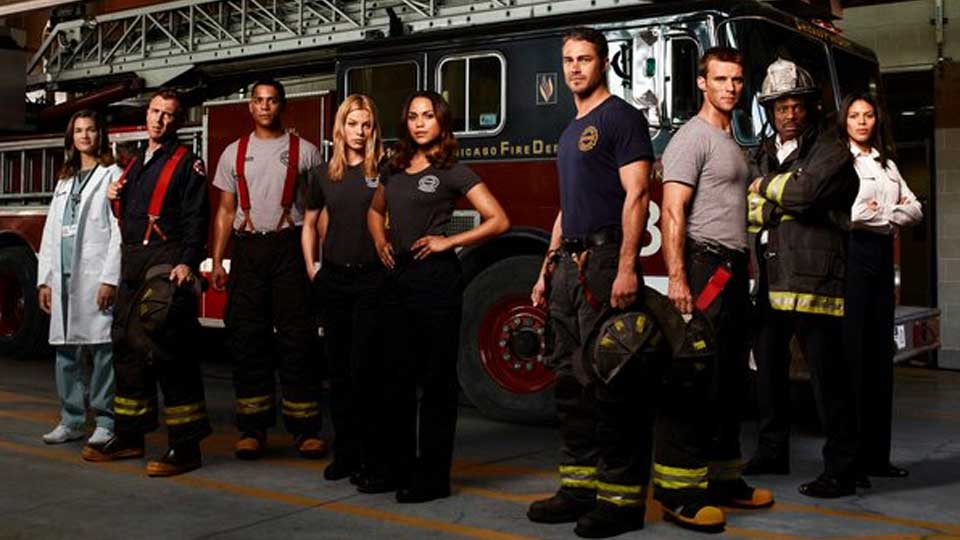 The professional and personal lives of the firefighters and paramedics of the Chicago Fire Department are the central focus of the first season of the hit US drama. Following the death of a colleague Lieutenants Matthew Casey (Jesse Spencer) and Kelly Severide (Taylor Kinney) find a wedge driven in their relationship that divides their precinct. As the two firefighters clash heads, their also have to deal with their own personal problems and the issues of their teams. For Casey his mother is in prison for killing his father and he’s torn between a relationship with colleague paramedic Gabriela Dawson (Monica Raymund) and ex-fiancee Hallie Thomas (Teri Reeves). For Severide he’s battling pain killer addiction whilst trying to hide an arm injury that could spell the end of his career as well as juggling a variety of women in his love life.

One of the first things you notice about Chicago Fire is that the accidents, fires and tragedies that punctuate each episode actually come second to the drama between the characters. Structured like a standard procedural, each episode of the show involves a fire-related investigation with the personal lives of the characters often taking over the spotlight. This means that the show is easily watchable but it’s never going to be one that you simply cannot miss.

The storylines over the course of the first season come thick and fast with Casey and Severide getting the most screen-time. Oddly the two characters interact very little through much of the season with their rivalry bubbling under the surface. Casey finds himself drawn into a battle of intimidation with Detective Hank Voight (Jason Beghe) after refusing to cover up the police officer’s son’s involvement in a car crash that left a girl paralyzed. This storyline dominates a good portion of the season.

Severide on the other hand is mostly dealing with the impact his arm injury has on his ability to work and the show’s writers find situations most episodes to emphasise that his arm is preventing him from being able to fully do his job. This storyline is a little heavy-handed but once it starts to move to a resolution you breathe a sigh of relief. After all he’s one of the main characters so they’re hardly going to write him out are they?

Outside of the main characters, the supporting characters get a lot of screen time too. Candidate Peter Mills (Charlie Barnett) assists the firefighters in the hopes of following in his late father’s footsteps and becoming one of the team. Paramedics Gabriela Dawson and Leslie Shay (Lauren German) often find themselves in trouble usually due to Dawson’s temper and tendency to break protocol. Shay also has a romantic dilemma to deal with when her ex-girlfriend shows up pregnant and involved with a man. Wallace Boden (Eamonn Walker), the chief, spends the majority of his time trying, and failing, to control his precinct.

One of the scene-stealers for the series is David Eigenberg as Christopher Herrmann. Sex and the City fans will know him as Miranda’s husband Steve and in Chicago Fire he gets all the best lines, some of the light-relief plots and his ever-expanding family is a running joke. It’s great to see him on our screens again.

Extras on the boxset include behind-the-scenes footage featuring interviews with the cast of the show as they talk about key scenes and storylines from the season.

Chicago Fire: Season One is the reason the term ‘guilty pleasure’ was invented. Is it ever going to bother awards series or become a classic show? Probably not but the soapish nature of it means it’s quite addictive and could probably go on for years. It’s very similar to Third Watch which covered very similar subject matter. We could pick at little things about the show like Jesse Spencer’s terrible American accent or the fact that people seem to walk out of spectacular crashes without a bruise but to do so would be missing the point. Chicago Fire is the fast-food of the current US TV schedule and you’ll find yourself gorging on it fairly easily without remembering too much about it after a few days.

Secrets and Lies 2×10 The Truth preview

Secrets and Lies 2×09 The Brother preview

Secrets and Lies 2×08 The Racket preview

Secrets and Lies 2×07 The Statement preview