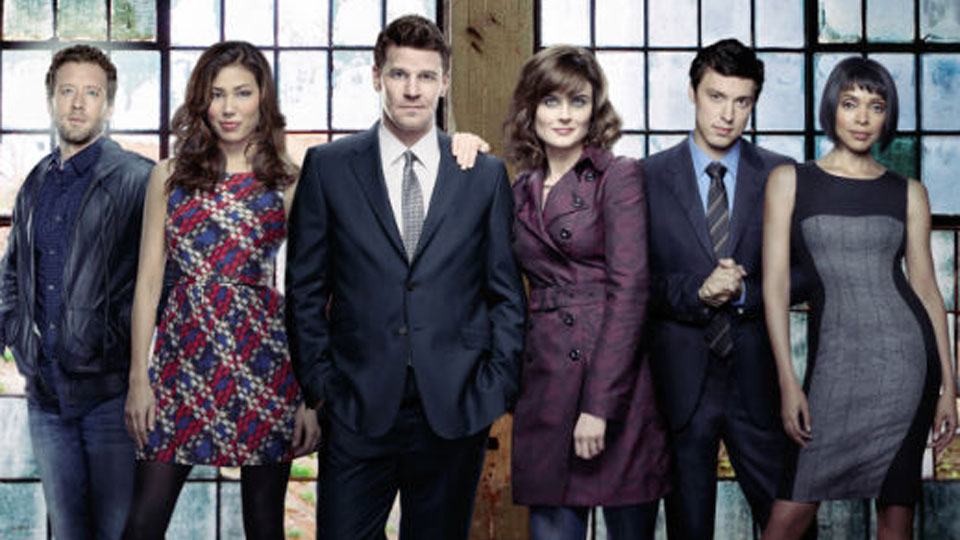 Bones’ seventh season was cut short in order to accommodate lead actress Emily Deschanel’s pregnancy. Running for only 13 episodes, the season was the shortest in the show’s history, with season 3 in second place. When the show returned in 2012 for its eighth season, fans were delighted that they would get 24 episodes to spend with Brennan (Deschanel) and Booth (David Boreanaz).  Bones is now one of the longest-running US shows still on air with its ninth season currently airing and suggestions that a tenth may be its last (we hope not!).

The action picks up three months after the season seven finale which saw Brennan go into hiding after being framed for murder by Christopher Pellant (Andrew Leeds). Assisted by her team Brennan is determined to clear her name is season opener The Future in the Past. Of course it doesn’t take a psychic to realise that she has to clear her name as without Brennan aka Bones there isn’t really a show now is there?

Once the wrap-up from season seven is out of the way we re-enter familiar territory with each episode revolving around a different murder. The rotation of interns that has served the series well since the exit of Zack (Eric Millegan) at the end of season three continues with several familiar faces popping up again including Clark (Eugene Byrd), Wendell (Michael Grant Terry) and Colin (Joel David Moore). Sweets’ (John Francis Daley) on/off relationship with the irritating Daisy (Carla Gallo) continues with her popping up in 3 episodes.

This season is really one of re-evaluation and exploration for both Brennan and Booth. Having cleared herself of murder, Brennan reassesses her relationship with Booth and has to adjust to being a mother with his help after being a single mother whilst in hiding. She also has to learn to juggle motherhood with her job and all the dangers that come with it. Outside of Brennan and Booth, the supporting characters get plenty to do too. Angela (Michaela Conlin) and Hodgins (T.J. Thyne) get dragged into the midst of Pellant’s vendetta against Brennan and Angela gets a chance to shine when she goes undercover at the roller derby to investigate the death of a skater in The Doll in the Derby. Cam (Tamara Taylor) gets a surprise visit from her adopted daughter Michelle in The Friend In Need.

There are some great guest stars over the course of the season. Cyndi Lauper plays psychic Avalon Harmonia in standout episode The Ghost in the Machine which takes a new narrative style telling the story from the perspective of the victim. Ryan O’Neal reprises his role as Brennan’s shapeshifting father Max for two episodes and Joanna Cassidy portrays Booth’s mother Marianne in The Party in the Pants for a surprise invitation.

Extras on the Blu-ray boxset include deleted scenes, a gag reel, selected episode commentaries, a Q&A and a featurette on fans of the series.

Bones: The Complete Eighth Season is a really strong season for the show and it’s good to have a full-length one after the shortened seventh season. The fluctuations in Brennan and Booth’s relationships are core to this season but there’s plenty outside of that to enjoy. We really do hope that the ninth season isn’t the penultimate one as we think that Bones could go on for a long time.