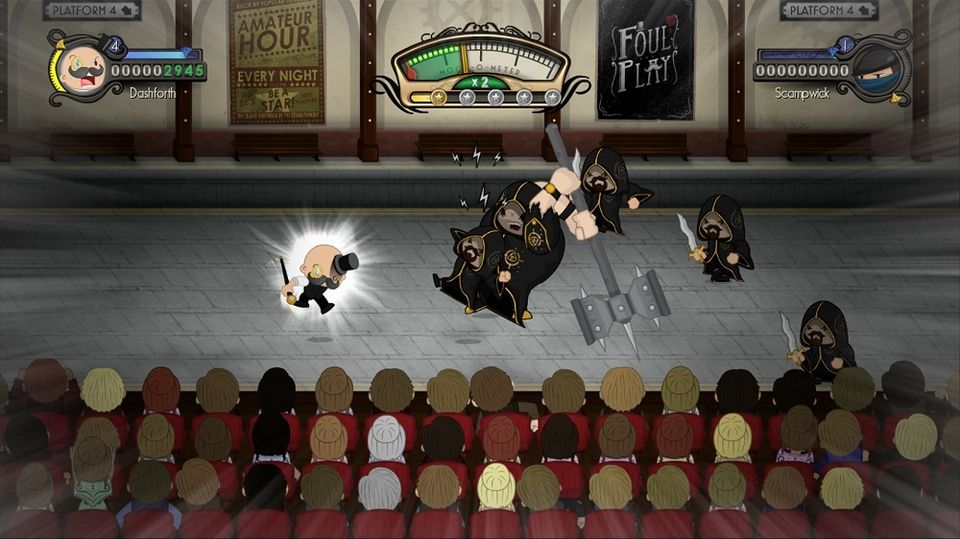 We’ve seen a few games over the past couple of years that have taken place on a theatre stage. Titles such as The Gunstringer, Black Knight Sword, Battleblock Theater and Puppeteer have all used the setting for their action. Now it’s the turn of Mediatonic and Devolver Digital with the help of Mastertronic in their latest title Foul Play.

The game is a side-scrolling brawler where you play as protagonist Baron Dashforth. He’s a Victorian daemon-hunter who takes to the stage to tell the incredible tale of his life story. He’s accompanied by his loyal companion Scampwick. The story is split up across a series of plays and he begins each sat in an armchair. As he recounts his tales the stage comes alive with actors, props and scenery.

The game starts you out with simple light and heavy attacks before moving onto grabs, throws and special abilities. It’s possible to button-mash your way through the majority of the game but if you want to go for the bigger combos and tougher challenges then you need to practice.

The key to mastering bigger combos is learning to move around the stage quickly so you can string your attacks together. Learning when to execute the parry move is also essential as it can stop you getting hit to keep your combo alive. Getting into the right position before attacking can be frustrating and we often found ourselves losing a high combo while swinging at fresh air.

Each stage presents you with a series of challenges to beat. These require you to focus more on learning the combat. The challenges can be tough to beat but it’s worthwhile as you can be rewarded with charms. You can have two active at once and they buff your character.

The game is most fun if you team up with a friend for local or online co-op. It doesn’t change the game a great deal but you must work together to keep the audience happy. There are also co-op moves available such as parrying an enemy together. The co-op adds an extra competitive element to the gameplay.

Aesthetically the game looks lovely and it uses a similar style to the TV show South Park. The game is packed with humour but there is often too much going on so you have to really pay attention to take it all in. One area we were rather disappointed in was the lack of voice-acting. The dialogue and banter between the characters is really entertaining but you have to read everything.

Foul Play is a fun game but only in short bursts due to the repetitive gameplay. Sadly it feels like it’s missing something to make it really special. Voice acting and more co-op options would probably have helped it. At under five hours it is also quite a short game but side-scrolling brawler fans should still enjoyment their time with it.