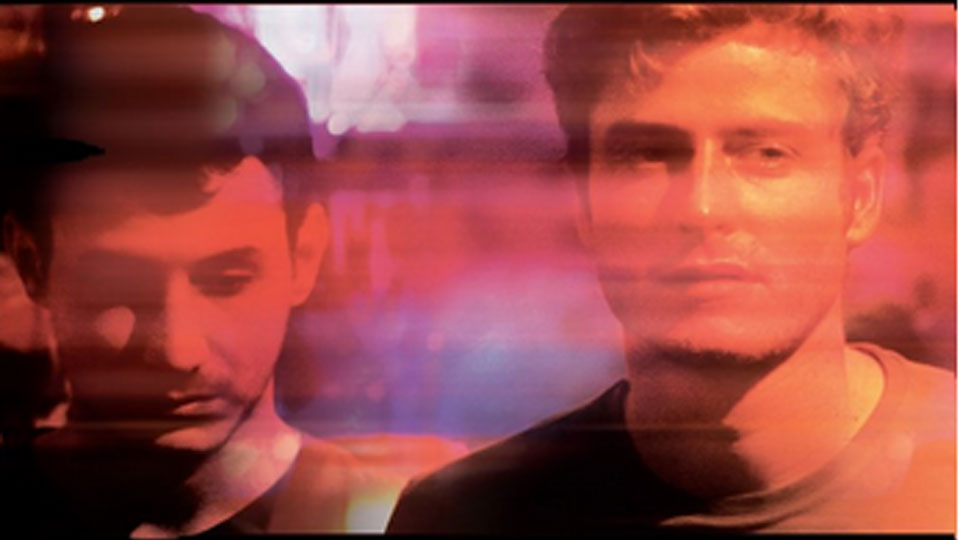 Two guys meet in a bar late at night and immediately feel a spark. Romance should be simple, right? The problem is that Nimr (Nicholas Jacob) is a closeted Palestinian, visiting gay Tel Aviv nightspots solely thanks to a study permit, and Roy (Michael Aloni ) is an out and proud Israeli Jew. All they know is that they want to be together, but the insoluble conflict in the Middle East and their wholly disparate backgrounds threaten to tear them apart at every turn.

This movie has both heart and brains, in abundance. Out in the Dark is an intelligently-written love story that takes a nuanced and thoughtful view of the Israel/Palestine conflict to create a modern-day gay Romeo and Juliet (the comparison is obvious and inevitable). It’s the first feature film from promising Hollywood-based Israeli director Michael Mayer.

Out in the Dark

All Nimr wants to do is to study hard so that he can get out of Palestine where it’s impossible to be openly gay, and he keeps his sexuality hidden from his religious family. His brother Nabil (Jamil Khoury) is a gunrunner for terrorists who plot atrocities in Tel Aviv, and it’s not long before Nimr falls under suspicion of the Israeli secret services. Roy is a lawyer from a wealthy background, but can he find the resources to protect Nimr, legally keep him in Tel Aviv and ensure they have a future together, especially when the law doesn’t do much to help gay couples or offer asylum?

Out in the Dark is a beautiful film. Whilst the background to the story may be politically complex, the story is told simply and clearly, with the love between Nimr and Roy always at the foreground. It’s engrossing from start to finish, and you’re likely to have a lump in your throat and a tear in your eye by the time it reaches its unbearably tense climax. It packs such an emotional punch it’s almost a relief when the credits roll. It raises the bar for films made on a modest budget.

Out in the Dark

A large part of the key to the film’s success is the lead actors who are chosen to bring a great script to life. Michael Aloni is excellent as the stubborn, slightly arrogant Roy, and Nicholas Jacob melts your heart as the loveable and naive Nimr. Whilst it’s disappointing to learn both actors are straight, their on-screen chemistry is completely believable and Nimr and Roy are a hot, great couple who you want to stay together. The love scenes play it safe, and the night-time dip in the pool is a bit of a movie cliché: but since the actors make it so believable, it’s easily overlooked. It’s a love story you’ll never forget.

The supporting performances are great too. Jamil Khoury is suitably saturnine and thuggish as Nimr’s troublesome older brother; and Loai Nofi is memorable as Mustafa, a gay Palestinian who is allowed to stay in Tel Aviv in return for collaborating with the Israeli secret services and feeding them information. Mustafa is symbolic of the unenviable plight of gay Palestinians, and of the very few options open to them in living an honest life.

Whilst the subplot involving Mustafa resonates most strongly in terms of consciousness-raising about the plight of gay people in other countries, Out in the Dark touches on other social issues too. The relationship between Roy and his parents is skilfully and honestly captured. Roy’s prickliness is a defence mechanism against his superficially pleasant, yet homophobic mother (Chelli Goldenberg) where his father (Alon Oleartchik), is caught in the middle. Nimr’s home life is depicted in painful detail: religiously-inspired bigotry leaving him no future in his home country.

The hand-held camera work and use of location filming on the streets of Tel Aviv lends Out in the Dark a documentary-feel evocative of news footage of the Middle East conflict, creating and sustaining a realism that makes the love story all the more engrossing. With the actors speaking in Hebrew and Arabic, English subtitles are provided.

Out in the Dark uniquely uses a poignant gay love story to highlight wider social issues in the Middle East conflict. With outstanding performances and a story that stirs the heart, it’s an excellent film in its own right and deserves a wide audience: gay, straight, and everything in between.

Extras include deleted scenes, a theatrical trailer, and a ten-minute interview (in English) with director Michael Mayer and stars Nicholas Jacob and Michael Aloni.