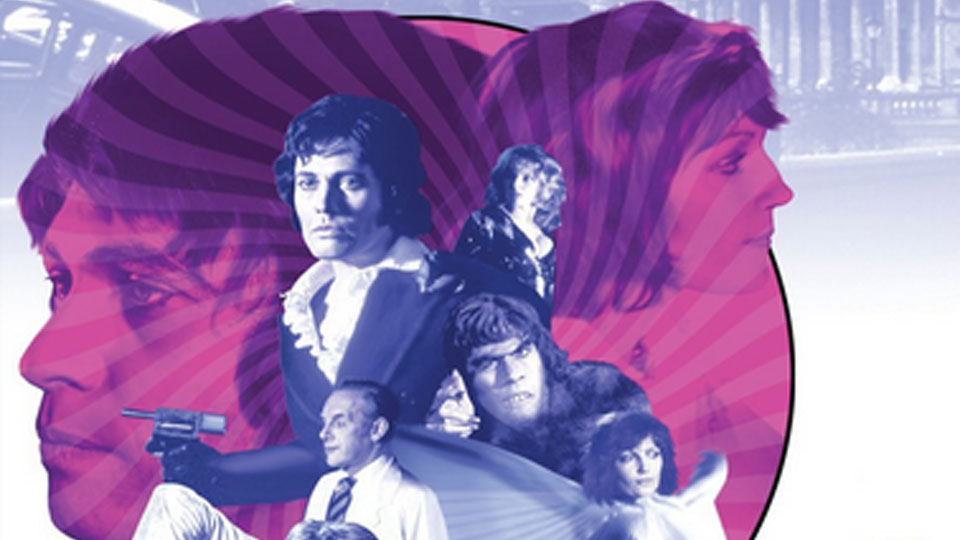 The Final Programme is a 1973 British science-fiction film with a strong blackly comic element. It was released in the United States under the title The Last Days of Man On Earth. Based on a Michael Moorcock novel, it’s adapted, directed and designed by Robert Fuest, who cut his teeth on cult TV series The Avengers.

At some unspecified time in the future, a brilliant scientist dies with his secret computer programme, The Final Programme (a method for creating a perfect, self-replicating human being) stored on a microfilm and hidden away. His son, Jerry Cornelius (Jon Finch), both playboy billionaire and physicist, finds himself aiding less scrupulous scientists in recovering the microfilm in an attempt to realise his father’s work. One problem: the microfilm is tracked to his father’s old house, which is full of nasty booby traps, and occupied by Jerry’s psychotic and drug-addicted brother Frank, who is holding their sister Catherine hostage.

Yeah… don’t worry too much about the plot. It’s daft and hokey (secrets on microfilms being hunted by goodies and baddies – a stock device for many a hack). If you insist on a well-structured story and enjoy credible science in your science-fiction, The Final Programme will not float your boat. The science is ludicrous technobabble concerning solar radiation and super computers (you’re not meant to pay attention to it – that’s how irrelevant it is to the plot).

However, and it’s a big however, The Final Programme, watched perhaps with a few glasses of wine, is enormous fun, and much more humorous than it has any right to be. It’s also aesthetically very nicely put together. Robert Fuest’s stamp is all over the film. Not only did he direct it and adapt the book for the screen, but he designed it too. And the sets are absolutely stunning! There’s a brilliantly realised feeling of space lending the film a more epic feel than the limited budget should have allowed. The costumes are excellent too, with Jon Finch running around in a velvet jacket, black gloves and frilly shirt, looking like a cross between Jimi Hendrix and Jon Pertwee. Finch (who should have been a massive star, especially after playing the lead in Hitchcock’s hugely underrated Frenzy, though he never quite reached the heights he should have) is a wonderful lead. He’s devilishly handsome, charming, charismatic and funny.

The comic element of the story is made resoundingly clear by the casting of Graham Crowden as one of the mad scientists. Crowden never failed to give anything other than barking mad, eccentric and ludicrously over-the-top performances (for which he was very regularly employed, often by Lindsay Anderson, and also in the series A Very Peculiar Practice and Waiting For God). That’s not to do down Crowden: he was terrific – but directors knew what he’d bring.

There are a few other actors of note making appearances. Citizen Kane’s George Coulouris is another mad scientist. He was a tad dotty by 1973 and stumbles over a few lines. Superman’s Sarah Douglas plays Jerry’s sister Catherine, though she doesn’t get to do very much apart from ‘sedated acting’. Ronald Lacey (a memorable Nazi in Raiders of the Lost Ark) is his usual sinister self, and Jenny Runacre acquits herself well as a lethal seductress. Squeaky-voiced Sandra Dickinson (who was in the Hitch-Hiker’s Guide to the Galaxy and married to Peter Davison for a while) and veteran Harry Andrews take on small and fairly thankless roles.

The whole film is a bit like an LSD trip, not just in reference to the colourful psychedelic special effects, but also in terms of its tenuous grip on logic (things often happen for dramatic effect rather than for any good reason). As much as it’s meant to depict the future, it’s a stronger reflection on the era that spawned it. It’s slick and stylish rather than deep and prophetic. But it certainly is stylish, and charms its way through to a fun conclusion in an abandoned Nazi stronghold.

Comedy is the key here. If you can accept that The Final Programme is deliberately silly (there are plenty of clues in the dialogue) then you’ll probably enjoy it. If you try taking it seriously you’ll end up frustrated. It may well prove a Marmite title. Poignantly, both director Robert Fuest and star Jon Finch died last year.

Released four decades ago, The Final Programme has scrubbed up well for its DVD release, which has been transferred from the original film elements. It retains the original full-screen format.