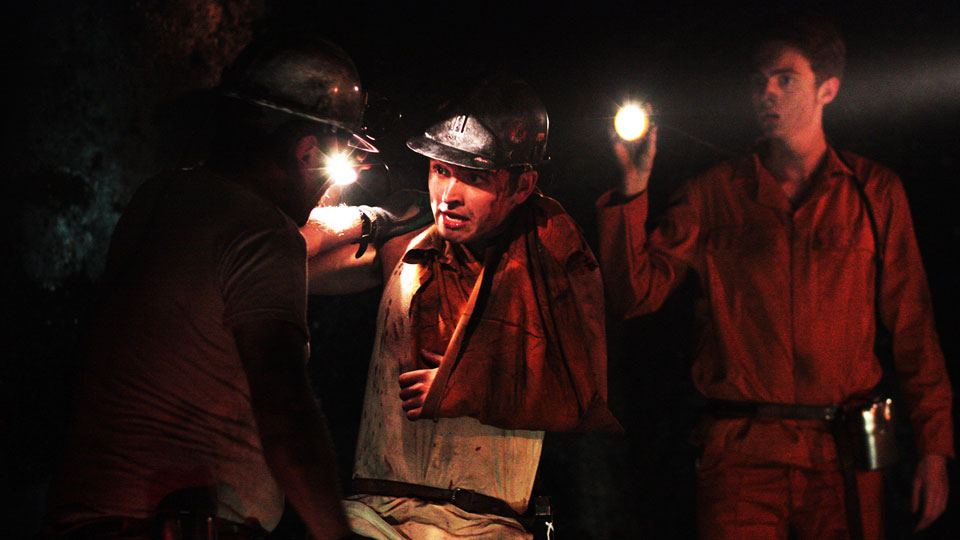 If you want to see some great new writing then head down to Theatre503 for Chris Urch’s remarkable new play Land of our Fathers.

Six Welsh miners are trapped deep underground when a section of tunnel gives way. Whether or not they will emerge alive and see their loved ones again remains in the balance. With only each other for company and moral support, they endure their incarceration together whilst long-buried feuds, secrets, and hopes and dreams all come to the fore. Against the odds, they work to find a way out, hoping those at ground level won’t give up looking, whilst all the time the food, water and air diminishes.

Chris Urch’s play is spellbinding from start to finish. Watching Land of our Fathers, with its depth of characterisation and beautifully structured storytelling, it’s easy to see why Urch was chosen for the coveted writer’s residency at Theatre503. His excellent script is brought vividly to life by six actors who draw the best out of one another, and they make for an incredible ensemble.

Clive Merrison (The History Boys), one of the finest character actors of his generation, is the veteran of the piece, and his casting a clear indication of the quality such a great story can attract. His long stage and screen career has invariably seen him play either comedic or edgy characters. Here he relishes the chance to combine the two. As Bomber he’s often deliciously potty-mouthed, drily ironic, and an awkward sod when he wants to be. He’s never anything less than great fun to watch.

Patrick Brennan is equally impressive as Chopper, the deputy of the group. He’s excellent at playing strong and authoritative characters (can it be nine summers since he impressed us in Murray Gold’s Electricity?). Here, skirting around potential spoilers, he goes a little King Lear in the second half, playing wildly out of control with impeccable precision. He is genuinely frightening in the part, and not someone you would want to get on the wrong side of. Paul Prescott brings great dignity to the part of Hovis, a Polish war veteran who is the peacemaker of the group.

Whilst there are no female voices in the cast – the necessity of setting it down a mine – variety is given by the younger members who are no less impressive than their illustrious colleagues. Kyle Rees’ apparently gruff Curly is nuanced with sensitivity; and younger actors Joshua Price and Taylor Jay-Davies show considerable talent and conviction: clearly names to watch.

Anyone with medically-diagnosed claustrophobia: face your fear and go and see Land of our Fathers anyway. Take an aisle seat if you have to. The design (Signe Beckmann) sees every inch of stage rendered in black, with the illusion of solid walls of coal. Like all the best bleak plays, Land of our Fathers is intensely moving but also incredibly funny, even if its humour is at times as jet black as the omnipresent coal. The sheer intensity of the piece makes for uncomfortable viewing at times, but it is wholly emotionally rewarding. With every twist and turn of hope followed by despair followed by renewed hope you watch on as a passive spectator, immersed, vicariously sharing in the emotional extremes of the characters; drawn in by the stifling atmosphere created by the writing, performances and design which work together to sustain the drama until the conclusion. Do the miners get out alive? You’ll have to go and see it…

Land of our Fathers is set in the late 1970s, on the cusp of Thatcher coming to power in Britain and eradicating mining communities forever. Urch selects the period with purpose: it signalled the death knell of the mining industry that held village communities together, and Land of our Fathers is an homage to and evocation of a way of life that no longer exists. It only adds to the poignancy of the piece.

As an incredible piece of new writing with universally outstanding performances, Land of our Fathers is must-see theatre. You can catch it at Theatre503 near Clapham Junction until October 12th.