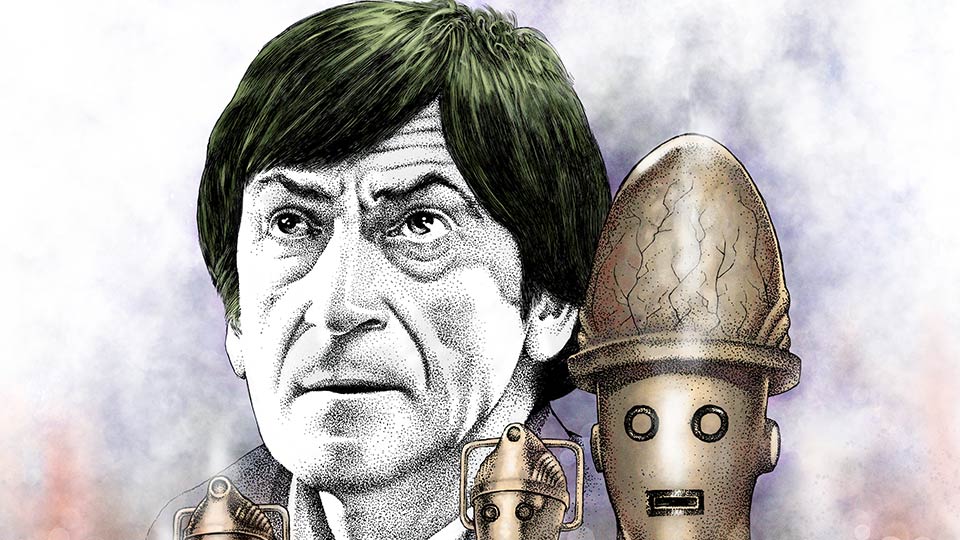 The secret to the success of Doctor Who has always been its flexible format – not just in story terms but also in the multitude of formats through which the show can be enjoyed. Branching from its natural home on TV, there have been movies, countless books, CDs, videos, DVDs, Blu-rays… and now that most enduring and popular format of all – vinyl. This audio package is another way for fans to enjoy their favourite series.

This release of the 1967 classic The Tomb of the Cybermen sees the soundtrack of the original broadcast episodes transferred onto 180g vinyl, with linking narration provided by Frazer Hines, who stars as Jamie in the production. This is instantly nostalgic, because the soundtrack of the show had previously been released – with Hines’ linking narration – back in the early 1990s when the episodes were missing. A restored soundtrack remains the only way to enjoy some of the lost early episodes from the 1960s, but Tomb was a rare exception – it turned up, complete and unedited, in Hong Kong! Although the additional narration doesn’t have much explanatory power to those who know the story well, it does give Hines moments to shine, especially when he describes his character Jamie as, “Resplendent as usual in his clan tartan.”

This vinyl release has magnificent attention to detail and very high production values. It’s spread across two vinyls – moulded in the same metal grey of the Cybermen, with one complete episode per side. Presented in gatefold design with sleeve notes and photos from the story, The Tomb of the Cybermen really is a thing of beauty. This release is a vivid reminder of the lost art of standout album cover design – which declined sharply with the advent of smaller formats such as CDs and digital. The purchase is worth it solely for the majesty of David Timoney’s artwork depicting the Second Doctor, the Cyber Controller and two Cybermen (recalling the distinctive pin-point style of Chris Achilleos, which will always be close to the older fan’s heart).

As for the episodes themselves, they are perfectly suited for an audio experience, because television drama fifty years ago was much more dialogue-driven than it is now (any episodes of the effects-driven reboot would struggle on this format). In the 60s, the viewing public had to pay attention to long scenes, and listen to what the actors were saying. When you know the story well, removing the visuals forces you to listen more closely – and it heightens the pleasure, especially on high-quality vinyl where the sound is so sharp. You’re also saved from some of the less-than-special-effects that large flatscreen televisions unforgivingly magnify. There are no strings holding up Toberman and no dummy Cyber Controller here. In your head, the Tombs are cavernous, dark, creepy, threatening… Vinyl is the perfect format to let your imagination loose.

Gerry Davies and Kit Pedlar (who created the Cybermen) wrote a perfect set of scripts with The Tomb of the Cybermen, and the story was deemed strong enough to launch the fifth season of the show. Patrick Troughton, magnificent actor though he was, and easily amongst the best Doctors, nevertheless took a couple of stories to bed in to the character, perhaps because his portrayal was far removed from his own personality. Yet by The Tomb of the Cybermen, he had hit his stride. His loveable interplay with companions Victoria (Deborah Watling) and Jamie (Frazer Hines) shines through in his voice, as does his constant mischievousness. With crystal clear sound, the scene in which he comforts Victoria about the death of her father and opens her eyes to the wonders of their travels – a defining moment of the series – is powerful enough to bring forth goosebumps. The guest cast is great in this story, too, and everyone pulls together to bring the full potential out of the story. From George Pastell’s villainous Greek Eric Klieg to Cyril Shaps giving a masterclass in cowardly anxiety, and Clive Merrison’s cheerful young American crewman, The Tomb of the Cybermen is a terrific ensemble piece.

This isn’t simply a limited edition collectable for the completist, but an excellent choice of story to enjoy Doctor Who purely as a sound experience. If you relish the beauty of well-produced vinyl, this version of The Tomb of the Cybermen is an aesthetic pleasure.

See also our review of Doctor Who – City of Death, also released on gatefold double vinyl by Demon Music Group.