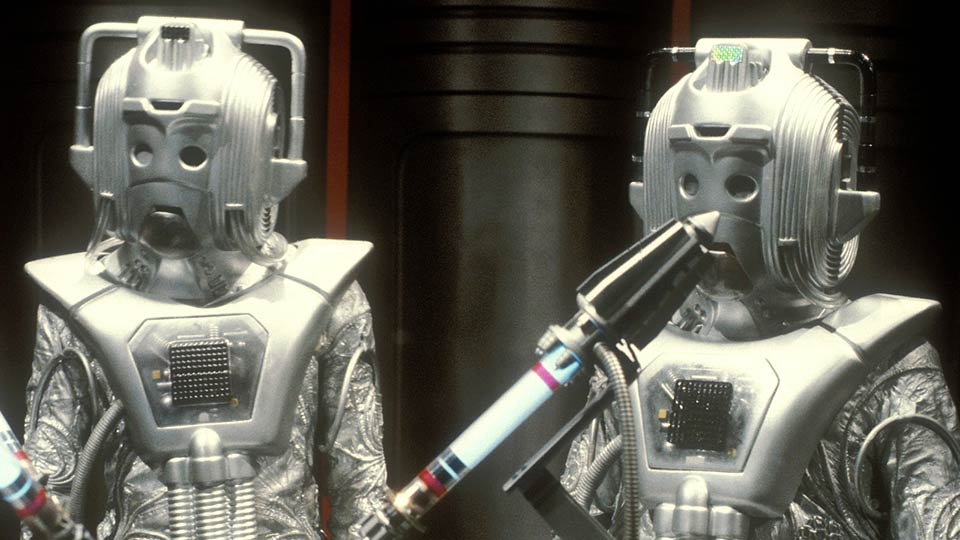 The Cybermen were, second only to the Daleks, the most popular monsters in Doctor Who. They appeared in ten stories of the classic 1963-89 run. The iconoclastic chaps over at The Complete Menagerie (Almost) podcast are running a series of Cyber specials in their latest season, in which they are joined by special guest star David Banks – the man who breathed life into the Cyber Leader in the 1980s, and developed the mythology of the Cyber race in book form.

But what to make of the original Cybermen stories? As the Menagerie give their analysis of each adventure, this contributor breaks ranks to rate them in order from worst to best… Do you agree?

It’s always a shame to nominate a Patrick Troughton story in last position, but there’s no escaping that The Wheel in Space is a bit of a snorefest. It introduced new companion Zoe Herriot (Wendy Padbury) and returned the Cybermen with a teardrop design on their masks. So far, so good. Yet the story plods along at six episodes, and with only two Cybermen, the threat is thin. Plot elements are recycled from The Moonbase, and from the surviving two episodes, there isn’t a whole lot to get excited about. The silly Cyber space walk in the final episode hardly makes for a thrilling climax.

Easily the weakest Cybermen story of the 1980s, Silver Nemesis is a rare misfire in the remarkably good final two seasons of the show, during Sylvester McCoy’s tenure. In this story, the Cybermen are pushed out of the limelight by a band of Nazis led by Anton Diffring (who else?), and by Fiona Walker’s villainous Lady Peinforte. The story isn’t terrible, but a ploddingly directed shootout between the Cybermen and the Nazis turns what should be a high point into a damp squib and leaves it feeling a bit of a let-down.

This marked the Cybermen’s first appearance during First Doctor William Hartnell’s final adventure. A strong and memorable concept by creators Kit Pedlar and Gerry Davis is let down by interminably long scenes of exposition and the absence of the increasingly frail William Hartnell from much of the proceedings. There are several iconic and rightly-lauded moments. Sadly, it’s not quite the sum of its parts. More dramatic scripts would have placed the Cybermen’s screen debut much higher up the rankings.

The second appearance of the Cybermen was the first of four occasions in which they would meet Second Doctor Patrick Troughton. There are moments of high drama, such as when the Doctor asks if the room they are standing in has been searched. Yet the plot is as ludicrous as they come – it would take the 2005 remake to stretch credulity even further – leaving the Cyber threat rather preposterous given more than a moment’s thought. It has the ring of a 1950s’ B-movie, which is not a compliment.

It’s impossible not to love the twentieth anniversary special of 1983 – and judged as a full package – The Five Doctors is an adorable celebration. Yet as a Cyber story, they don’t come out of this one covered in glory. As cannon fodder for the Raston Warrior Robot, they contribute to the most dramatically memorable sequence in the whole serial, but are simply shot to pieces. They are also outwitted by Anthony Ainley’s Master (which doesn’t look good on anyone’s CV) and fail once again to blow up the TARDIS. An inglorious entry to the annals of Cyber history.

5. Revenge of the Cybermen

The only outing of the Cybermen in the 1970s – having skipped Jon Pertwee, they faced Tom Baker only once. Yet here, as “glorified hatstands” who are “skulking about the galaxy in an ancient spaceship”, the Doctor treats them as a joke. Given their undramatic reveal, flared trousers, and propensity to flounce around a floodlit set, their return to the series wasn’t especially good for the Cyber brand. Little wonder they wouldn’t show their faces again until thoroughly reinvented seven years later. Thankfully, other elements of this story work quite well, and the guest cast and location filming are great – hence its relatively high ranking.

4. Attack of the Cybermen

The solitary screen outing for Sixth Doctor Colin Baker against the Cybermen was slickly directed by Matthew Robinson. The Cybermen were returned to the shadows where they belong, skulking around the sewers of London. Their reveal – behind a sliding brick wall – is a great moment of high drama, and with the conversion of Lytton (Maurice Colbourne), having first crushed his hands to torture him, the Cybermen are at their most violent, and the grotesque implications of converting people into Cybermen is at its most explicit in the original run. Only an indifferent script for the second episode lessens the impact they otherwise make.

Patrick Troughton’s final encounter with the Cybermen is an absolute belter. The mammoth eight-parter was also a signifier of things to come, with the involvement of UNIT led by Brigadier Lethbridge-Stewart, and set entirely on earth. Kevin Stoney is in magnificent form as Tobias Vaughn – a kind of James Bond villain human Cyber agent (another trope) – who is the CEO of International Electromatics – a multinational tech company. The trope of the Cybermen stalking the sewers is established, and the scenes of them pushing open manhole covers and stalking down the steps of St Paul’s Cathedral are as chilling as they are memorable. Director Douglas Camfield had a fine eye for action, and keeps the story pacey. Troughton, and others on the crew, are alleged to have enjoyed filming at a functioning Guinness factory. OK, so lots of exciting things happen off screen – that’s 1960s TV for you – but The Invasion sustains wonderfully over the eight episodes.

After their slightly camp and silly appearance in Revenge of the Cybermen, it would take seven years and a brand new Doctor (Peter Davison) for them to return. When they did, it was with a bang (pun intended). The redesigned costumes have an impact today, and are easily the Cybermen’s strongest and definitive appearance. This is also the best they have ever been characterised, and a microphone in the costume allowed the actors to record their dialogue live. David Banks and Mark Hardy make their debut as the Cyber Leader and Cyber Lieutenant double act that ran throughout the 80s, and their performances bring the best out of the Cyber brand. They were never this menacing before, nor would they be again. Their lingering human emotional traits and movements add greatly to their effectiveness. The believable performances and magnificent costumes bloom in moody lighting and confined to a spaceship. Take a bow, director Peter Grimwade. The scenes in which the Cybermen wake from their dormant states and break free from the silos before grouping and marching on the trapped humans is one of the great cliffhangers of Doctor Who, and reminiscent of…

1. The Tomb of the Cybermen

Missing from the archives for many years, 1967’s The Tomb of the Cybermen saw a whole legend build up around it. When it was finally returned for all to see, it held up as a classic. Patrick Troughton had nailed his performance as the Doctor by this time, and he clicked with companions Frazer Hines and Deborah Watling. The chemistry of the TARDIS crew is warm and wonderful. The story sees a group of archaeologists finding the ancient tombs of the Cybermen. As they excavate it, death and destruction follows. Incredible design work allows the actors to walk around sets both imposing and claustrophobic. Once they descend to the icy depths, it becomes even more tense. The scene in which the re-awakened Cybermen burst out of their hive-like tombs has rightly taken its place as a great moment in television history. Sure, you can see the wires at times, and yes, the Cyber Controller is a dummy in the last scene, but… The Tomb of the Cybermen enthrals audiences over fifty years on. It’s brilliantly-structured, with a sustained atmosphere of menace. The magnificent guest cast includes Clive Merrison and Cyril Shaps. It’s pure magic, and none of the Menagerie ever tires of seeing it!

For more on Doctor Who: The Complete Menagerie’s Cyber specials, delving into the mythology of the Cybermen with David Banks, who devised The ArcHive Tapes, check out and subscribe to the podcast, and be sure to follow on Twitter @DWMenagerie for all the latest from the lads. We are, as Cyber Leader David Banks himself has put it, “such a witty, enjoyable and complete menagerie – and I couldn’t begin to add the word ‘almost’.”