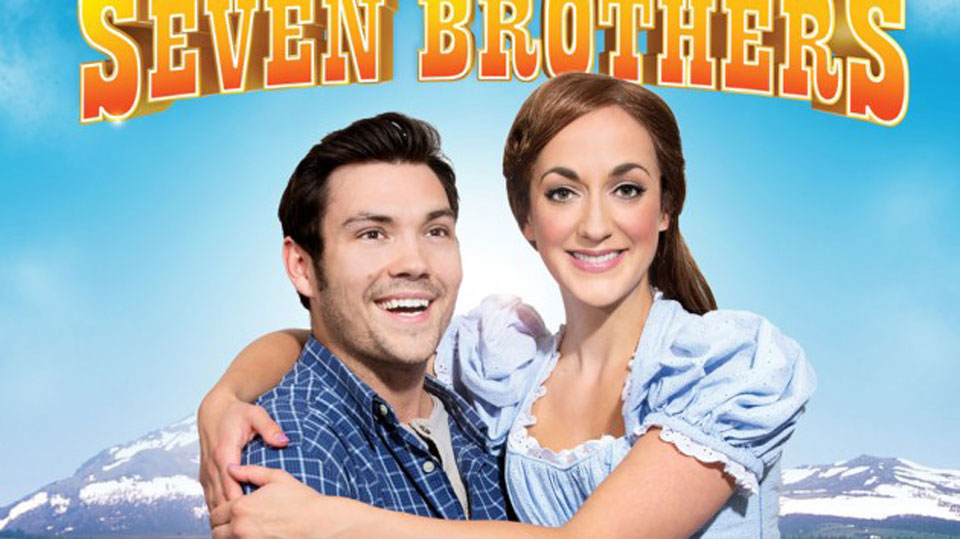 A stage adaptation of the classic MGM musical that starred the toothsome Howard Keel is currently embarked on a major UK tour. This week it plays at the Churchill Theatre in Bromley.

The story is a twee retelling of The Rape of the Sabine Women (the better-read will enjoy the explicit reference to Plutarch’s tale from Roman history). Set in Oregon in the mid-Nineteenth Century, it sees charming woodsman Adam (Sam Attwater) visiting the local town with the express intention of finding a wife. After a whirlwind romance (all of five minutes) local beauty Milly (Helena Blackman) agrees to marry Adam, and he whisks her off to his cabin in the woods to live happily ever after…

…except that the cabin is also home to Adam’s six uncouth brothers (save for the very sweet youngest, Gideon). Appalled at her fate, Milly nevertheless teaches the brothers some manners so that they can find their own wives and leave home. In a jolly twist, the brothers kidnap local townswomen and hold them hostage in the woods for several months until the girls succumb to Stockholm Syndrome and agree to marry the brothers.

The Grimms’ Fairytale-like plot plays out with a host of knees-ups and high japes along the way; and if you can look past a critical appraisal of the sinister plot, Seven Brides for Seven Brothers is enormously good foot-tapping family fun, and this production frequently sparkles in all the right places.

Sam Attwater has great stage presence in the lead role of Adam. Within the parameters of a very rose-tinted view of rural life in the Pacific Northwest, he plays a woodsman with great conviction and commitment, and makes for a credible head of a household, commanding respect from his younger brothers. Helena Blackman gives as good as she gets as the feisty Milly, bringing a lot of fun to the part, and another standout performance is the adorable Jack Greaves as Gideon.

What makes this production stand out is some truly incredible choreography, which principally arrives during a barn dance that sees the brothers compete with rival suitors. With over a dozen bodies on stage taking part in some energetic dancing involving axes, back-flips and manoeuvres on table-tops, it proves a thrilling routine that draws rapturous applause. There’s no other musical quite like it for combining song with dance on such an impressive scale. If you like a brilliantly staged knees-up, you’ll love this show, and hats off to director Patti Colombo for bringing together such a large cast with great coherence.

Other great aspect of the show is beautiful lighting, with the effect evocative of early-morning in the country, which also manages to be generous to simplistic set design. A further aesthetically pleasing aspect is that the brothers spend a fair amount of time shirtless: a treat for the majority of the audience on any given night.

Last night’s production was regrettably consistently hampered by technical miscues – not the fault of the cast and crew. There was a damaging false start, lighting cues were too-often askew at crucial moments, and mics were turned on and off with little regard as to which actor was actually speaking. It’s an indication of the enormous technical requirements of staging a show with a large cast, multiple characters on stage at the same time, and dozens of set and lighting changes; and this is a show that demands a technician at the top of their game.

A talented young cast brings to life a much-loved musical that is colourful, cheerful and notable for its dazzling dance routines. If that sounds like your thing then check out the Seven Brides for Seven Brothers tour on ATG Tickets to find out when it’s arriving at a theatre near you.