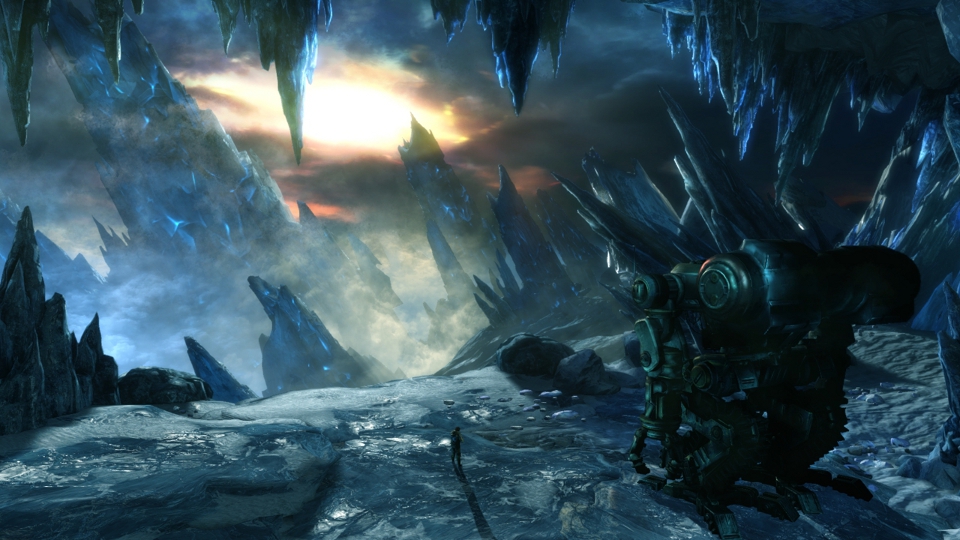 The third entry in Capcom’s Lost Planet series is actually a prequel to the first game, Lost Planet: Extreme Condition. This time around Capcom have passed development over to California-based studio Spark Unlimited (Legendary, Turning Point: Fall of Liberty). The game has also seen a switch in engine moving away from Capcom’s MT Framework in favour of Unreal Engine 3 by Epic Games. We’ve been playing the Xbox 360 version but the game is also available on PS3 and is coming to PC later this month.

The game is much more story driven than the last two games with a strong focus on character development. Set some 50 years before the original, players take the role of new protagonist Jim Peyton. He’s a rig pilot who heads off to E.D.N. III (the same planet from the other games) on a lucrative contract with the Neo-Venus Construction company (NEVEC). Unlike in the previous games NEVEC haven’t yet become the antagonists. They are mining the planet for its Thermal Energy which they hope will save Earth from an energy crisis.

E.D.N. III is an incredibly dangerous place thanks to the hostile creatures, known as the Akrid, that inhabit it. The weather is also deadly and unpredictable as the planet is undergoing a kind of ice-age much like in the first game. The money must be really good though as Jim has left his family behind on Earth. Due to the great distance between planets they can’t communicate in real-time and must instead respond to each other’s video messages.

The focus on story and characters has resulted in a much slower paced game. In between missions you can take your time to explore the Coronis base and interact with the NPC’s there. There are plenty of hidden audio and text logs to discover too which further flesh out the story.

When playing as Jim the game acts as a third-person cover shooter and he controls really well. You can move with the left stick and aim with the right stick. Tapping a direction and A button allows you to perform a dodge roll. Right Trigger fires your equipped weapon and Left Trigger looks down the sights for better aim. Clicking the left stick in allows Jim to sprint and the right stick executes a melee attack.

The combat is fun but it does get really repetitive as there are only a few enemy types and even boss battles get recycled. You start with an unlimited ammo pistol and killing Akrid earns you Thermal Energy. This can be spent back at base on new weapons and upgrades. You also eventually gain frag grenades and a super handy grappling hook that makes getting around easier. Jim also has the ability to repair machines that are broken.

To get around the planet Jim must use his rig which is essentially a giant bipedal mech designed for mining. The rig is slow moving and comes equipped with a claw arm and a drilling arm. These are useful for grabbing and drilling things but are not really designed with combat in mind. Due to regulations the rigs are simply there for mining and construction so aren’t equipped with any kind of guns, missiles or hover jets.

When you enter a rig the viewpoint changes to a first person view. When sat inside a rig you feel protected from the environment and less vulnerable. However they are not immune to the weather and can often freeze up. A tap of the B button allows Jim to zip line down from the rig to the ground to shoot the ice off. Tapping B again lets him zip back up into the rig. As well as getting around the rig can be used to open doors that are stuck and to manipulate heavy mechanisms.

There’s a linear path through the game if you just follow the story missions. However there are also plenty of optional side-quests to discover. These come with big rewards that you can they use to upgrade your gear. Although the game has an open-world feel to it this is spoilt somewhat by the need to have loading screens between each area. There are also some inconsistencies as you move around such as invisible walls to stop you falling off some ledges but not others.

Graphically the game is rather lovely to look at. The environments are detailed and the character models and animation are excellent in the cut-scenes. The weather effects in particular deserve a mention and the voice acting is decent too.

In addition to the lengthy campaign the game also features a competitive multiplayer component. There are six maps and four modes – Team Deathmatch, Scenario, Extraction and Akrid Survival – these can be played online with 2-10 players. These are all fun but mostly similar to modes you will have played in other games. However there are twists to make them a little more interesting and fit them in better with the Lost Planet universe.

Lost Planet 3 isn’t for everyone but players who enjoy a slower story-based shooter should find a lot to like here. The combat gets repetitive but the story keeps you interested and things really pick up towards the end of the game. The main campaign should last you around 15 hours and then there is plenty more fun to be had for fans of multiplayer.

Advertisement. Scroll to continue reading.
In this article:Capcom, Lost Planet