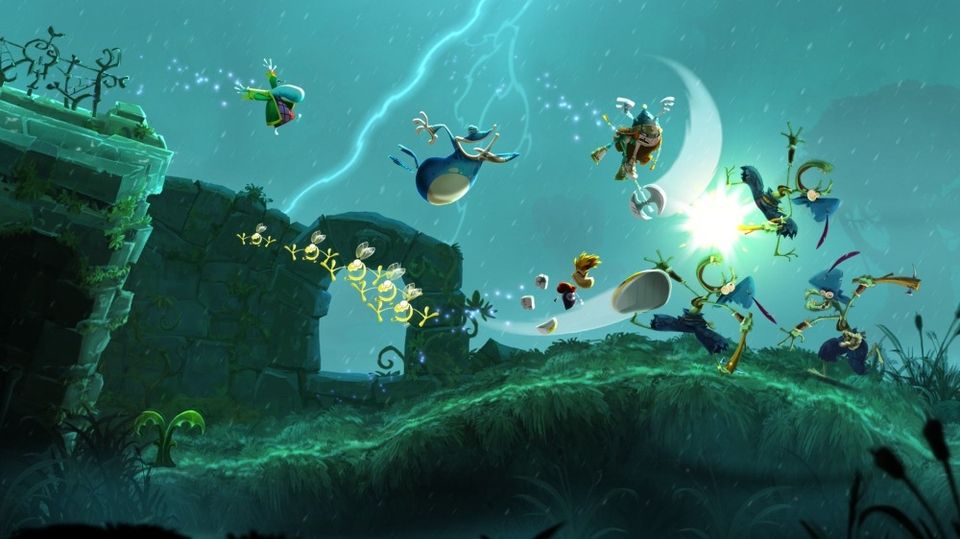 We must admit that back in 2010 we groaned along with many other gamers when we heard Rayman was getting another game. However when Rayman Origins eventually arrived in late 2011 we were more than a little surprised at how wrong we’d been. Now Michel Ancel and Ubisoft Montpelier are back with the sequel Rayman Legends and we couldn’t wait to get stuck in.

We first heard about the game early last year and at E2 2012 it was announced that it would be exclusive to the Nintendo Wii U. However many Wii U gamers were upset when the developers announced a delay last October in order to bring the game to Xbox 360, PS3, PC and PS Vita.

During the long delay the developers have done more than just port the Wii U version over. They’ve been able to spend months adding stacks of extra content and polishing everything to perfection. We’ve been spending time with the 360 version for this review and we’re delighted to say it was more than worth the wait.

Building upon the brilliant Rayman Origins, Legends is packed with content and improves upon the original in many ways. The story this time around has the Bubble Dreamer suffering from terrible nightmares and the Teensies have been captured. It’s the job of Rayman and the other Heroes to track them all down and save them. Rayman is the default hero but there are lots to unlock including different variations of Rayman, Globox and the Teensies.

You character is moved with the left stick and the A button performs a jump. Holding A allows them to glide and X is used to perform attacks. A squeeze of the right trigger allows you to sprint and you’ll often never let it go. The controls are responsive and characters can also duck, wall jump, swim, swing and more. Mastering the controls is key if you want to do well.

There are 700 Teensies to find which are scattered across the six different worlds. Each world contains a variety of levels for you to tackle of varying difficulty. Unlocking each world requires you to find a set number of Teensies first and all but the final world are easily unlocked. You can access each world and level via paintings but most are initially locked. As you collect Lums and free Teensies you’ll unlock more and the game allows you to play them in the order you choose.

The bulk of the levels require you to make your way from the start to the finish while freeing Teensies and collecting Lums as you go. The levels are incredibly well designed and everything feels deliberate. There’s a best path through each level and collections of Lums often help nudge you in the right direction. The amount of Lums you collect is translated into your performance score which can earn you trophies and scratchcards.

Scratchcards are amusingly scratched by using both sticks on the gamepad. This uncovers six squares and matching items allows you to unlock content such as Back to Origins levels, Creatures and bonus Lums. There are 40 Origins levels to unlock which have been updated to play in Legends. If you missed Origins then these will be completely new to you but players of the original game will be sure to recognise them. There are many Creatures to unlock which have their own area you can visit. Each one you unlock will generate a bonus Lum or coin for you each day.

On many levels Rayman’s guide Murfy makes an appearance. He moves along based on your position and can be commanded with the B button. Murfy is able to help in a variety of ways from cutting ropes to moving platforms. He can also distract enemies such as poking them in the eyes or tickling them allowing you to attack or avoid them. Controlling him while sprinting and jumping takes practice but he’s a wonderful addition to the game.

Graphically the game is absolutely stunning to look at and levels are packed with detail and seemingly endless variety and surprises. Our favourites are those that force you to keep moving and the musical ones. Musical levels recreate famous songs with the brilliant game sound effects and they are all timed to the on-screen action. They are hard to describe but so much fun to play. Legends also features rescue missions and impressive boss fights. There’s also a crazy football mini-game called Kung-Foot.

Levels can be tackled with friends via local 4 player co-op which is chaotic and hilarious in equal measure. Sadly there is no online co-op but you can compete with friends and the world via challenges. These are unlocked based on your Awesomeness score and provide changing daily and weekly challenges to compete in. The higher you rank the better your trophy will be. While tackling them the game will throw in ghosts of friends and other players to race against. It also loves to remind you that a friend has done better than you to tempt you to have just one more go.

Addictive, inventive, satisfying and most importantly fun. Rayman Legends is an absolute masterpiece that will have you grinning your head off from the moment you start playing. Legends manages to surpass the excellent Origins and provides one of the best platforming experiences ever created. If you enjoy platformers then Rayman Legends is simply essential.