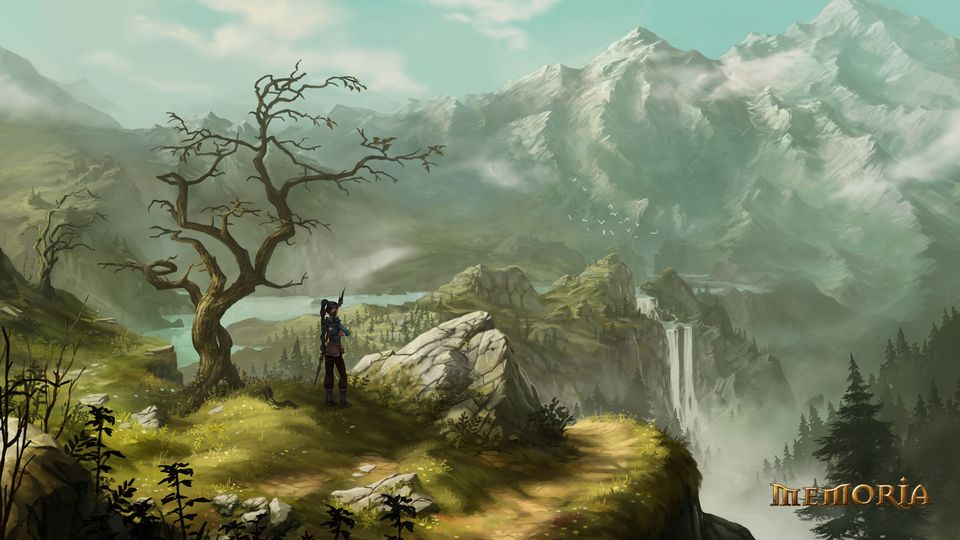 Following on from their excellent Night of the Rabbit earlier this year, German developers Daedalic Entertainment are back with another one called Memoria. This time it’s a sequel to their 2011 release – The Chains of Satinav. Despite not having played the first game we thoroughly enjoyed Night of the Rabbit so were keen to get our hands on the preview build for Memoria.

Memoria is once again set around the continent of Aventuria within The Dark Eye universe which is the most successful role-playing game in Germany (it even outsells Dungeons & Dragons!). Players once again take the role of protagonist Geron and his fairy friend Nuri. In the previous game they managed to save the kingdom but Nuri ended up trapped within a Raven’s body.

The longer Nuri remains trapped as a Raven the more she is forgetting herself and Geron is on a race against time to free her. His latest attempt leads him to a travelling Tulamide trader called Fahi who might be able to help turn Nuri back to her former self.

However before he will help Geron he requires some help himself to unravel the secrets of a princess named Sadja. Fahi has been having visions of Sadja in his dreams but she lived some 450 years ago during the Mages’ Wars. Geron agrees to help Fahi as it’s the only way he can see to save Nuri. Fahi is bothered by a riddle that Sadja uncovers and he gives Geron three days to solve it. If Geron is successful then Fahi will help Nuri.

As Fahi describes his visions of Sadja you actually get to play her. She starts her adventure on a quest to find the Mask of Malakkar along with a wizard, warrior, bodyguard and guide. The Mask is of course magical and able to undo mistakes. Sadja is a strong and determined character who has ambitions of going down in history by winning a war against a demon army that threatens her people.

As you progress the game jumps back and forth between Geron and Sadja. Both are controlled the same using the mouse to point and click around the screen. Left-clicking uses items and right-clicking examines them. You can also click items together to attempt to combine or use them together. Hovering your mouse pointer at the bottom of the screen shows your inventory and pressing spacebar highlights points of interest around the screen.

The two characters do have some differences though in the form of magical spells they can use. Geron begins with the ability to repair and destroy items, for example he can break a glass bottle into shards or turn the shards back into a bottle. A little way into the game he also comes across a magic ring called the Hare’s Eye (a nod to Night of the Rabbit) which allows him to see traces of magic.

A little way into her adventure Sadja discovers a talking staff which can activate magical items or dormant spells. This is first put to use to light up and extinguish braziers as well as take control of stone guardians. More spells are uncovered as you get further into the game.

The game seems fairly linear and often restricts you to small areas while you solve a puzzle. This helps keep the difficulty down but does lead to frustration when you are stuck. There’s a simple hint system which can point you in the right direction but we sometimes found ourselves just clicking on everything. For the most part we didn’t find the puzzles too obtuse and some of them are really quite creative.

Graphically the game is absolutely gorgeous to look at with stunning hand drawn backgrounds. The characters also look great with some wonderful animation although the build we played also had some rough animations too. Our preview build only featured German dialogue with English subtitles. However this didn’t really detract from the game due to high quality voice work and translations that seemed well done compared with many games we’ve seen. The final game will have fully localized languages when it releases. The soundtrack also deserves a mention as the music is really lovely.

Memoria is shaping up to be another fantastic adventure for Daedalic. We’ve really enjoyed our time with the preview build and are excited to play through the final game. Adventure fans should definitely add this one to their watch list.

Memoria is currently scheduled for release on August 30th.