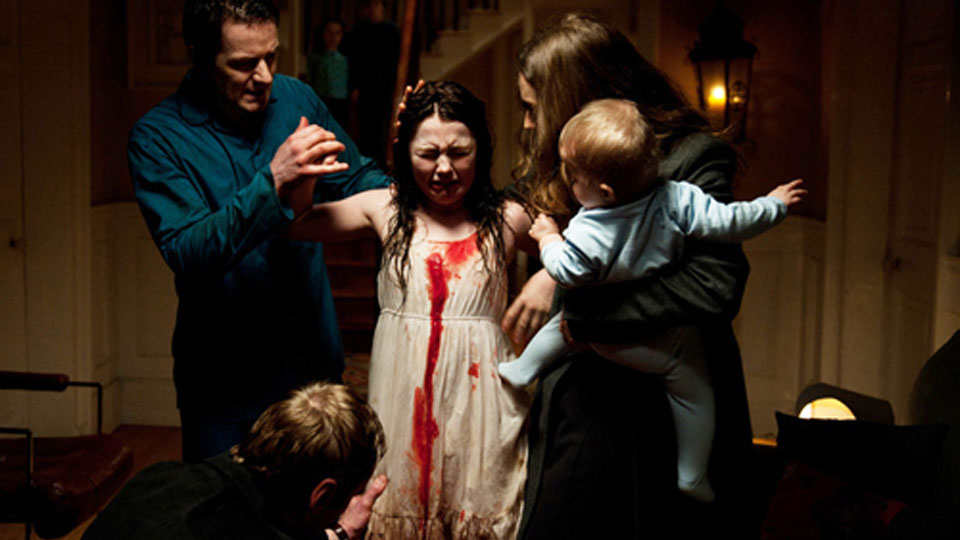 Niamh (Missy Keating) is taken in by her parents’ friends following the tragic and mysterious death of her entire family. The only survivor, Niamh tries to convince people that the house was responsible for their death and not her. Dismissing her claims as evidence of trauma, her temporary family try their best to help Niamh settle in and find stability. As they persevere it seems that Niamh has more problems than they first thought and the violence that seems to surround her starts to rear it’s head once again.

Dark Touch starts off strongly as a dark straight horror movie with plenty of chills and a few decent scares. After the initial half an hour the film slowly starts to fall to pieces and the promising Carrie meets Poltergeist plot becomes laughable. It’s a real shame because the film establishes a genuinely intriguing premise with the extent of Niamh’s troubles proving very disturbing. Quickly thought he good work is undone as the film shifts gears, has some awful dialogue and breaks free of the logic that held it together so well to begin with.

During the screening at Film4 Frightfest there was audible latter throughout the film’s second half from the audience. As characters uttered completely stupid lines at inappropriate moments e.g. A guidance counsellor concluding that there are ‘more questions to be answered’ after barely even having a conversation with Niamh. There’s also a crushingly embarrassing scene when Niamh is invited to attend a child’s birthday party and of course it all goes horribly wrong. Who knew that little girls enjoy beating the crap out of their dolls rather than playing nicely?

The film’s third act escalates further into absurdity with little rhyme or reason for its actions. Niamh seemingly transforms from a meek and mild girl with lots of issues into a menacing mastermind. Unfortunately we just didn’t buy it and the Village of the Damned/Children of the Corn style finale is utterly terrible.

Amazingly the film’s main star Missy Keating, daughter of Boyzone singer Ronan, comes out of the film unscathed. Her performance shows real promise and she is excellent in the early scenes where she has to portray the extent of her trauma through expressions and actions rather than words. She even convinces when her character performs a complete personality change in the film’s final moments. Padraic Delaney and Marcella Plunkett as her temporary parents do a good job too considering their characters are forced to do really stupid things e.g. slapping a child who they suspect has been abused.

It’s been a long time since we saw a film like Dark Touch that so quickly throws its credibility out of the window after setting up a fantastic premise. We’re tempted to say that the film is so bad that it’s actually quite good. If Dark Touch had stayed true to its premise then it would have been an excellent film. Instead it tries to do too much and winds up being a parody of itself. How did it all go so wrong?