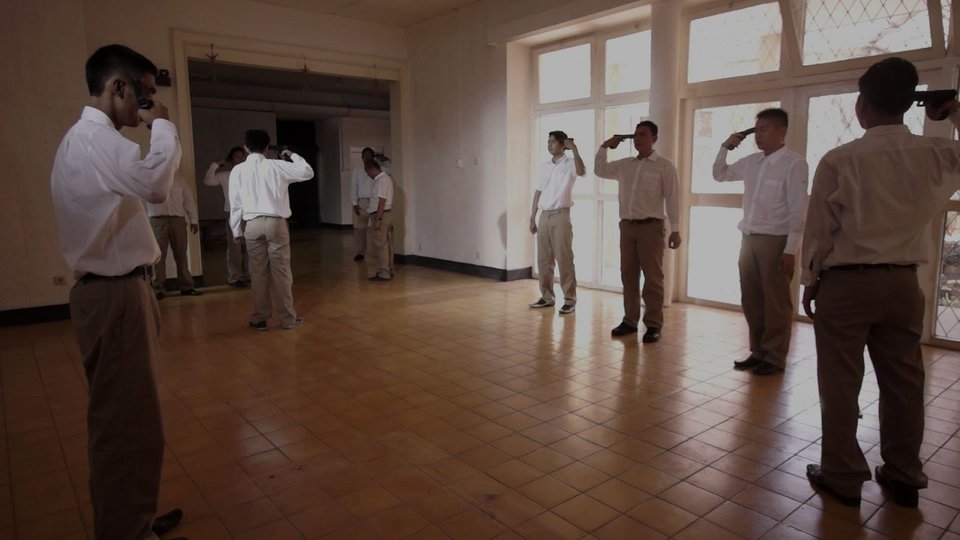 A private investigator and his assistant break into an abandoned house to find clues relating to a missing student case they are working on. Once inside, they stumble upon rooms full of VHS tapes, so begin to make their way through them. It becomes clear that there is something far more sinister going on here and as the VHS stories unfold, they realise that they are also in grave danger themselves.

V/H/S 2 follows on from 2012’s masterclass of horror and further progresses the story. Much like the first, V/H/S 2 is a horror with years of love thrown into it. The compendium of five deliciously dark tales is brilliantly put together by some of the brightest minds modern horror has to offer. The format may be familiar but V/H/S 2 manages to add something new whilst astutely playing with the nostalgia associated with the medium of VHS recording.

The presiding set-up is called ‘Tape 49’directed by Simon Barrett. It’s a great encapsulating narrative that links on from the events of the first movie but still poses more questions as to the origins of these tapes. There are numerous creepy moments as the investigator and his assistant and walking through the house and you catch a glimpse of something in the background.

The first segment ‘Phase 1 Clinical Trials’ is the weakest of the compendium but still starts the movie off well. We are introduced to a man (played by director Adam Wingard) who has a mechanical, recording eye fitted after an accident that charts the sights that he sees over the course of a day. The scary visions might be supernatural or just a computer glitch malfunction. It’s a familiar premise and there are some decent scares (the imprint of someone lying down on his bed is chilling) but the visions feel a bit too theme park ghostly rather than genuinely frightening. That said, there are still some nice suspense build-ups here.

The Blair Witch Project’s Gregg Hale & Eduardo Sanchez direct the second segment called ‘A Ride In The Park’. Taken from the point of view of a cyclist who uses a helmet cam whilst taking an early morning ride through the wilderness, this chapter is simply ingenious. He inadvertently stumbles upon a zombie attack and what follows is a first person account of various attacks in a forest/park. The use of gore and comedy leaves you laughing and emotionally drawn into the character – quite some feat given how quickly the segment is over. This is the sharpest chapter of V/H/S and shows that the Blair Witch boys still know how to shake up the horror genre.

Next up is the most disturbing but also the most visceral chapter of V/H/S 2 titled ‘Safe Haven’. From The Raid writer/director Gareth Evans and The ABCs of Death’s Timo Tjahjanto, this is a masterclass of fast horror mixed with haunting sequences and generally nasty gore. Aside from an ending that’s just a bit too ridiculous, this chapter is what people will be taking about the most. The set-up finds a group of filmmakers interviewing a notorious cult leader and offering him the platform to get his message heard if they are allowed to film a documentary in his inner sanctum.

After gaining access to the compound, they begin their interview but along the way witness some disturbing events from the other cult followers. Soon it becomes clear that the filmmakers have stumbled upon something far darker than they could have ever imagined that involves ritualistic killing and mass suicide. The film crews own personal situations come into play too when the cult leader begins a series of events that pivots on the interaction of one of their own.

This has it all. Copious blood, some truly chilling, visually stunning sequences, gun fights, hand to hand combat (Evans excels at this as we know), frightening dialogue and slow burn tension. There is even a bit of black comedy in there too. Overall, ‘Safe Haven’ is scary and very original, both in pacing and setting. Having a sequence in a foreign language really helps give the V/H/S franchise a new playing field and makes this second chapter a truly memorable experience.

The last chapter is ‘Slumber Party Alien Abduction’, a nice throwback to a bygone era of horror where kids feature prominently as the main characters. When their parents go out of town, some kids (ranging from 12 to 18) get their friends together for a bit of mischief. The younger ones are more interested in the camera they have attached to their dog’s head and in playing pranks on the older ones. The older sister of one of the kids is more interested in hooking up with her boyfriend but soon all of their plans are scuppered when an alien attack occurs. This is one of the most frightening alien abductions you’ll see, it’s shot with menace and threat throughout and features some truly memorable sequences. The only gripe here is that the roving camera does threaten to give you epilepsy a few times. There are too many light flares and the shakiness sometimes churns the stomach for the wrong reasons. But overall this is a clever, suspense filled sequence.

V/H/S 2 is a great horror compendium that happily sits as a modern-day genre classic. It’s also one of the best horror sequels you’ll see and cements this series as a must-see. Whilst the found footage angle is certainly tried and tested, V/H/S 2 still brings something new to the table. The film hits almost all of its marks and has a very satisfying conclusion – something that is increasingly rare these days. Go see V/H/S 2 and once again live out a nightmare that evokes the classic spirit of The Twilight Zone and The Outer Limits whilst never compromising on genuine, 18 rated scares. We cannot wait for V/H/S 3.