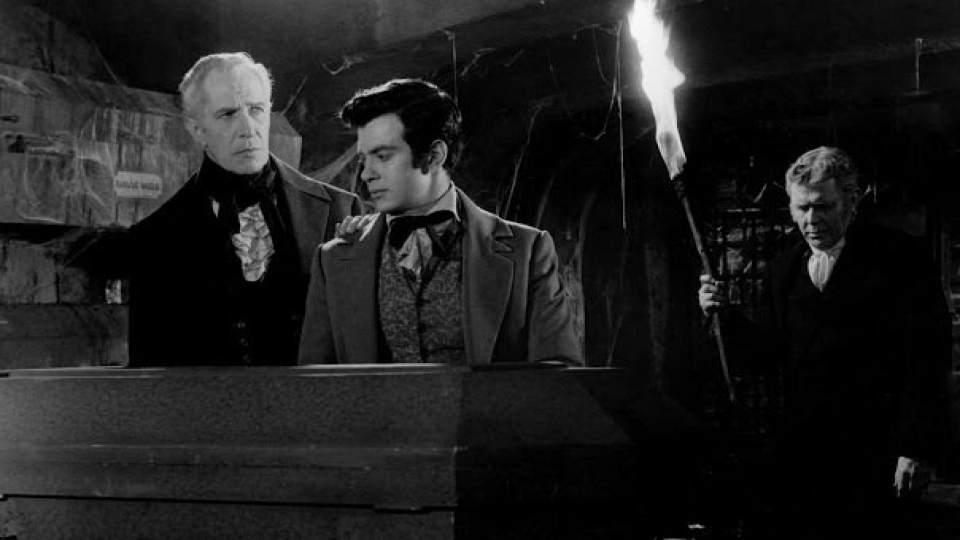 Philip Winthrop (Mark Damon) arrives at the house of Usher seeking his beautiful lady Madeline (Myrna Fahey). But upon arrival he discovers that Madeline and her brother Roderick (Vincent Price) have been struck down with a mysterious illness. Madeline has become almost catatonic whilst Roderick’s senses are very acute. In the evening Roderick tells Philip about an old Usher family curse; any time there has been more than one Usher child all of the siblings have gone insane and died gruesome deaths. As the days wear on, the effects of the curse start to become more vivid and real for Philip.

The film is based on the story by Edgar Allen Poe and directed by low budget maker extraordinaire Roger Corman, yet this film is anything but trivial and poorly made. In fact this is one of the greatest horror films ever produced. The story is as chilling nowadays as when it originally came out, its atmosphere really keeps the film’s tension ramped up to the max and the constant feeling of foreboding is something we will never shake off whilst watching this movie.

The ending has one of the scariest climaxes we have ever seen in a horror film that it made us want to look away from what was happening. It’s shot incredibly beautifully as well with the light colours of the house contrasting against the miserable, dank and oppressive exterior that comes to invade parts of the house and the inhabitants.

The Fall Of The House Of Usher really works because of Vincent Price’s performance. Price has given many wonderful and outlandish performances before but here he is simply magnificent. Initially he seems like the rather odd but charming brother that only wants to do best for his sister. But as time wears on his devilish interior starts to appear and brings about one of the greatest character transformations on screen, his descent into a demonic mind plagues the guest and us just for watching it happen. Vincent Price (without his famous moustache here) gives off a performance that will always be one of his greatest triumphs.

In this article:Film4 Frightfest, The Fall of the House of Usher