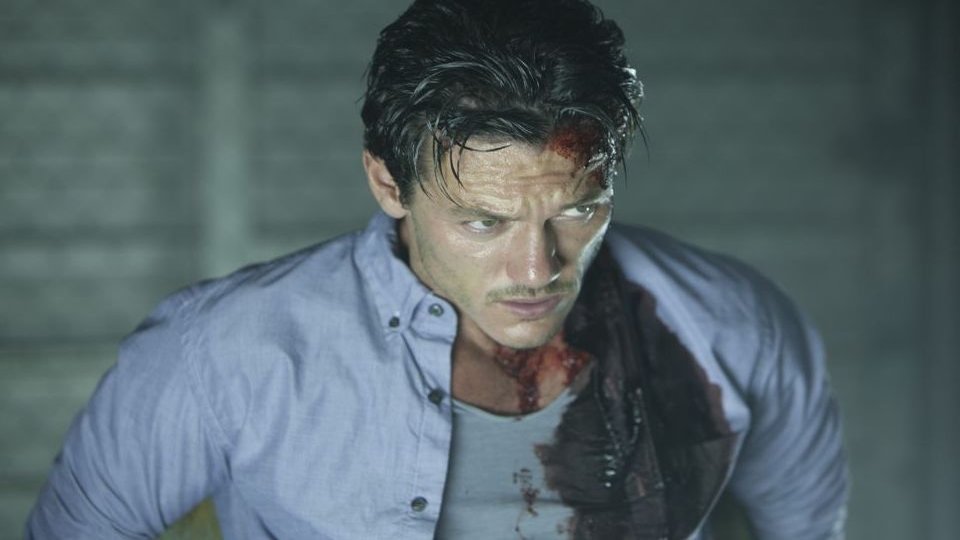 Wealthy heiress Emma (Adelaide Clemens) has vanished without a trace after a bloodbath that left fourteen students dead. A few months later, Driver (Luke Evans) and Betty (Laura Ramsey) are travelling across the United States when they happen to come across the ruthless Hoag (Lee Tergesen) and his notorious band of thieves, who run them off the road in a violent robbery attempt. When Hoag and his crew learn that Driver & Betty have got Emma as a hostage they assume a handsome reward will be on its way. But soon they realize they are far too deep into something they have no idea about, and the fight for survival really begins.

Clearly WWE have decided that the blood & gore films are what will draw in the audiences and has been working so far with previous films. No One Lives is the largest budget film from WWE studios and it really shows throughout the film. The film makers have decided to throw buckets and buckets of blood at anything that needs a bit of claret during the movie, it’s relentless and unforgiving. It is rather shocking initially but when we realised that this was going to be the general reaction to anyone being knocked off then it becomes a rather boring repeat of what we saw five minutes beforehand.

The storyline does have a nice little twist with the so called couple actually being more evil than the gang but once that’s happened it reverts back to a pretty low budget horror storyline of people just running around trying to kill each other. There are no interesting or adventurous ways of people being killed off and that’s what most horror films are about these days. Sadly nothing happens like that in this movie instead it’s all rather standard fares of the killing scenes.

Putting Luke Evans in the starring role gives No One Lives a certain amount of credence, and he ambles through the film perfectly fine, but it was tough to take him seriously as a real hard edged killer. Once again Lee Tergesen seems to be the one guy who is saving these B movie horror films at present, his ability to turn anything into a sinister and desperate situation shows what a great talent the guy is. His take on a vigilante might not be up there with Brando but it’s one of the few high points of this film, we wanted to see more of him wielding deadly instruments though.

No One Lives tries to get above its B movie status with a couple of known actors but it struggles thanks to a rather movie-by-numbers script (except for the twist) that doesn’t aid itself when trying to introduce new ideas. Instead the films answer is to just throw gore at everything and hope it sticks, which it doesn’t. We wanted just that bit extra from this film to make it a respectable horror rather than having us suspend disbelief at every single turn.

In this article:Film4 Frightfest, No One Lives