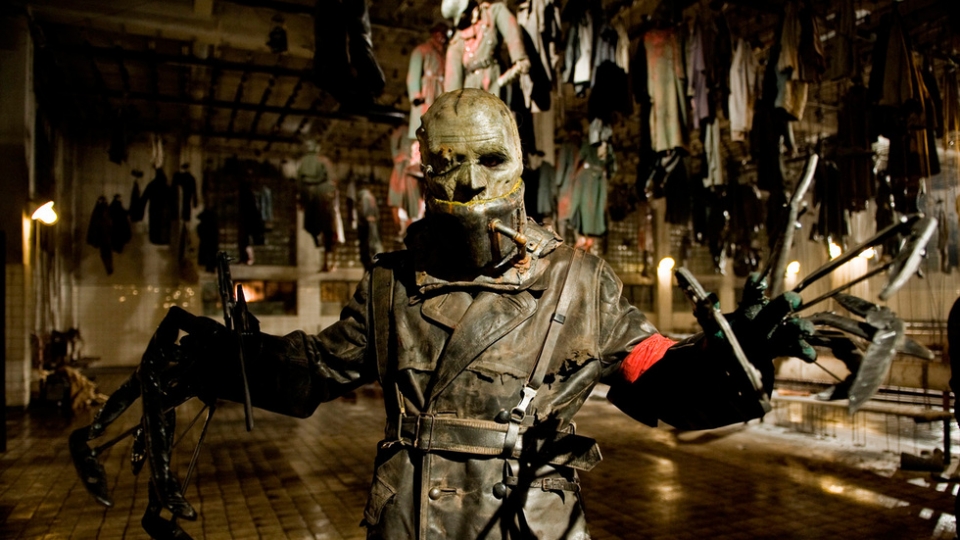 During the last days of World War II, a group of Russian soldiers find themselves lost behind enemy lines. As they find a village that has been decimated by unseen amounts of terror, they discover that a mad Nazi scientist has been conducting crazy experiments of fusing flesh and metal together to create an unstoppable army of undead soldiers. With no real leader in the ranks and dissension starting to set in, the battalion must find the courage to face an altogether new menace or, at least, die trying.

Frankenstein’s Army uses the horror cliché of found footage in telling its story. But the problem here is the story is incredibly weak and doesn’t position itself very well when trying to move the film along. One of the main issues is why is this found footage? It would mean that this was filmed during the 1950’s Surely that would have meant one of the battalion carrying around a rather large and extremely heavy Super 8 camera that would have stopped their ability to do anything other than carry the camera around. But this is never explained.

Another one of our problems with this film is that it never explains itself well as to what is happening or why the battalion are doing what they are doing. It’s a haphazard and poorly written script that can’t seem to make it across any plot points without stumbling. The only part they get right is when the film deals with the mad professor and his band of soldiers. Yet it takes so long for the film to get going that we had lost any interest. These are just a couple of the key problems with Frankenstein’s Army, and there are even more basic elements and story points missed out that you give up seeking a cohesive storyline.

We weren’t expecting the acting chops of Laurence Olivier, but at least a decent effort by those who are on screen the most would have made a welcome gesture. Sadly no one seems to be able to act beyond the obligatory running, jumping and killing. Any scenes where the group have to talk to each other about what is happening are misguided and terribly wooden in all the acting departments. A couple of the Russian’s sound more like they have stepped off the set of a Cockney gangster film and forgot to change their accent.

Frankenstein’s Army could have been a bit of fun by not taking itself too seriously. Instead, everything is wasted – including using the mad Nazi to his full effect, and the storyline fails to light up any fires to keep you interested.

In this article:Film4 Frightfest, Frankenstein's Army