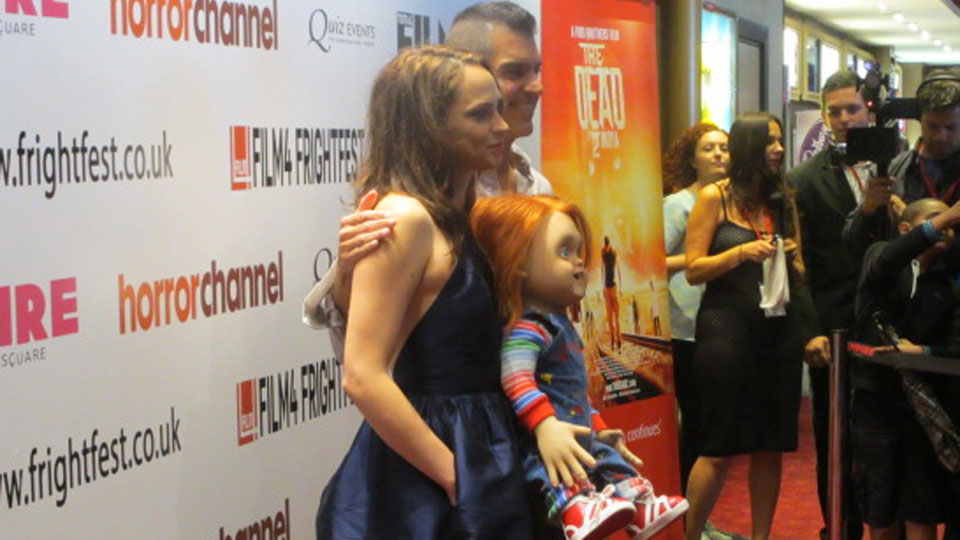 Curse of Chucky received its European premiere last night during the opening festivities for Film4 FrightFest 2013.

The film is the first instalment in the series since 2004’s Seed of Chucky and promises to go back to the horror roots of the original trilogy. Advance reviews from the US have been really positive so we were excited to see if the film lived up to the hype.

Ahead of the premiere we grabbed a quick chat with Child’s Play creator Don Mancini, who has written and directed Curse of Chucky, and star Fiona Dourif (daughter of Brad) who plays Nica in the movie. Find out what they had to say:

First of all welcome to Film4 FrightFest 2013. How does it feel to be here with Chucky?

The advance reviews of Curse of Chucky have been fantastic. That must be pretty encouraging for you?

Don: Yeah it is. It was really exciting when we played at Montreal a couple of weeks ago. The audience seemed to really like it.

Fiona: We won the audience award which was pretty cool. I’m just waiting for the anchor to drop (laughs).

Don: That’s the thing. Are English audiences going to be more reticent than the Canadians?

It’s been 9 years since the last Chucky film. I think we’re ready for another one…

Don: That’s what everyone keeps assuring us.

Is this going to be the start of more regular Chucky films or are you waiting to see how this one does?

Don: Of course. This one has to do well and be embraced by audiences. Let’s hope!

Give us a taster of what fans can expect from Curse of Chucky.

Don: For Curse of Chucky you’re in for a return to the tone of the original trilogy, especially the first film, after the comedic bends of Bride and Seed. I’ve been listening to fans for many years and they’ve been asking for a scary Chucky movie again and that’s what we’ve tried to do. We’ve tried to make it a love letter to all the people that have supported us for 25 years. There’s a nostalgia aspect to it built in with lots of suspense and scares.

Fiona, having grown up with these films as your dad is the voice of Chucky, how does it feel to now be part of them?

Fiona: Incredibly exciting and scary all at the same time. I’ve been more excited about this than probably anything that’s ever happened to me in my life. I’ve identified with Chucky my whole life. I just want to do it justice and I love him. It feels like a family legacy. I’m just very grateful and scared!

Don: Just to have our movie playing at this theatre (Empire, Leicester Square), which is one of the most famous movie theaters in the world, that’s a thrill in itself. I think they said it’s 1,400 people…

Fiona: I just can’t even think about it!

Don: …I’ve never seen one of our movies with so many people. That’s a little exciting and daunting.

Well good luck with the film tonight and we hope to see Chucky again really soon!

Curse of Chucky was shown at the Film4 FrightFest opening night and is released on Blu-ray and DVD in the UK on 21st October.

Watch the trailer for Curse of Chucky below: