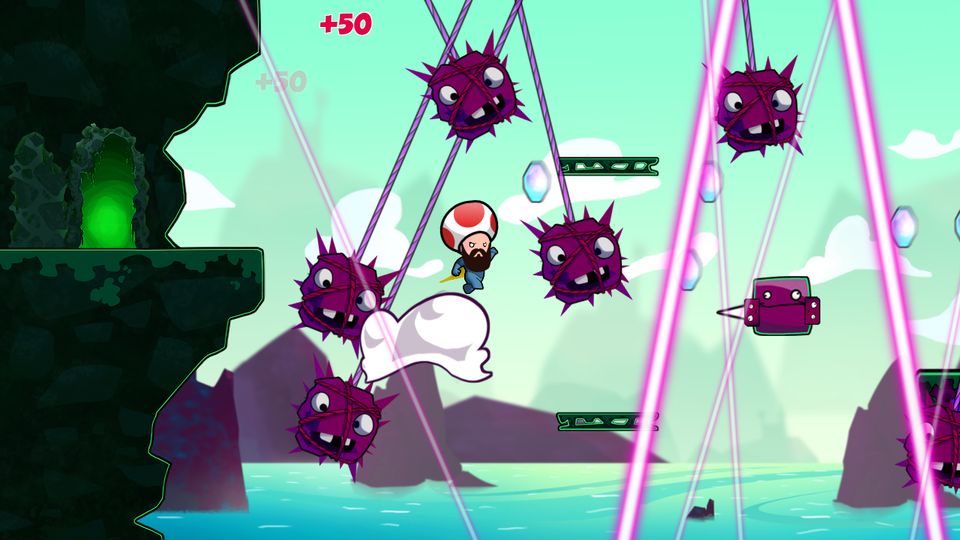 Cloudberry Kingdom is a randomly generated side-scrolling platformer from Pwnee Studios and Ubisoft. It was created with the help of a successful Kickstarter campaign which exceeded its goal last year. The game is now available on XBLA, PSN, PC (Steam) and Wii U. It is also expected to come to PS Vita in the future, for this review we’ve been spending time with the XBLA release.

Platform games have been around almost as long as games with the first titles in the genre appearing in the early 1980’s. The originals were all 2D but as technology became more powerful we saw a switch to 2.5D and 3D. In recent years we’ve been treated to some fantastic 2D platformers that have been mostly aimed at the hardcore audience due to their insane difficulties.

Cloudberry Kingdom aims to provide an endless experience for platforming fans of all skill levels. It’s able to do this thanks to the wonders of procedural generation algorithms. These are capable of creating random levels that are different each time you play. The most important aspect of these is that the levels that are created are all beatable, no matter how difficult they might seem at first.

The game features three different modes of play which are The Arcade, Story Mode and Free Play. Each mode can be enjoyed solo or with up to three friends. Before you begin you must each customise a character either manually or opt for a random one. It is possible to change their outfit colour, beard, hat and cape. None of this affects how your character performs and is simply there to allow you to create a character you like. The hats in particular add a lot to your character and feature things such as a pumpkin, afro, santa hat, paper bag, traffic cone and a brain.

Levels are short and simply require you to get from one end of the level to the exit door at the end. Along the way you’ll encounter all manner of platforming obstacles including spikes, falling and moving platforms, spinning columns of fire, rotating saws and even lasers. Each level also contains a number of coins for you to collect and if you get them all you get a perfect bonus.

In Arcade mode your player begins at level 1 in a group of levels called Escalation. These levels start easy but quickly become more complicated and difficult. As you progress you can unlock different hero types for your character such as a jetpack, pogo stick and double jump. These change how you play and the levels adapt accordingly. Different groups of levels unlock once you reach level 50, 250 and 500.

Story Mode is set across seven chapters starting with easy levels that gradually increase in difficulty. The final chapter is called The Masochist so you can probably imagine how tough things get. The neat thing is that you can actually feel yourself getting better as you progress. The story mode features a plot where hero Bob (voiced by Hercules actor Kevin Sorbo) must save the Princess from King Kobbler. The levels constantly change your hero type as well so you’ll start out as classic Bob but then switch to double jump or jetpack.

Free Play mode is the one that will keep you coming back to the game. Here you can tweak a bunch of parameters and the game will generate you a level. You can choose the location, game type, hero type, difficulty and length. You can decide on passive things like how hard the jumps are, level speed and frequency of the different block types. Finally you can add in aggressive elements such as spikes, monsters and traps. The game creates your level in a matter of seconds for you to play. Once you’ve tested the level you can choose to save it, replay it or have the game generate you another with the same parameters.

The coins you collect can be spent on player aids to help you when you get stuck. There are three different ones on offer – the first lets you watch the computer beat the level, the second shows you the best path through the level and the final one activates a slow motion mode to make things easier.

Graphically the game isn’t much to look at with a simple cartoon style. However the game isn’t about graphics and they help keep the focus on the platforming action. Levels can feel impossible at first but the gameplay has that addictive just one more go feel to it making it hard to admit defeat and stop playing. Levels have a best path through them and the more you practice the better you’ll get.

Cloudberry Kingdom is a fun game that can be hard to put down. It’s sure to please platforming fans thanks to the endless replay value to be had but be warned the difficulty can be punishing. If you think you’re up to the challenge and enjoy games like Super Meat Boy then you should definitely check it out.