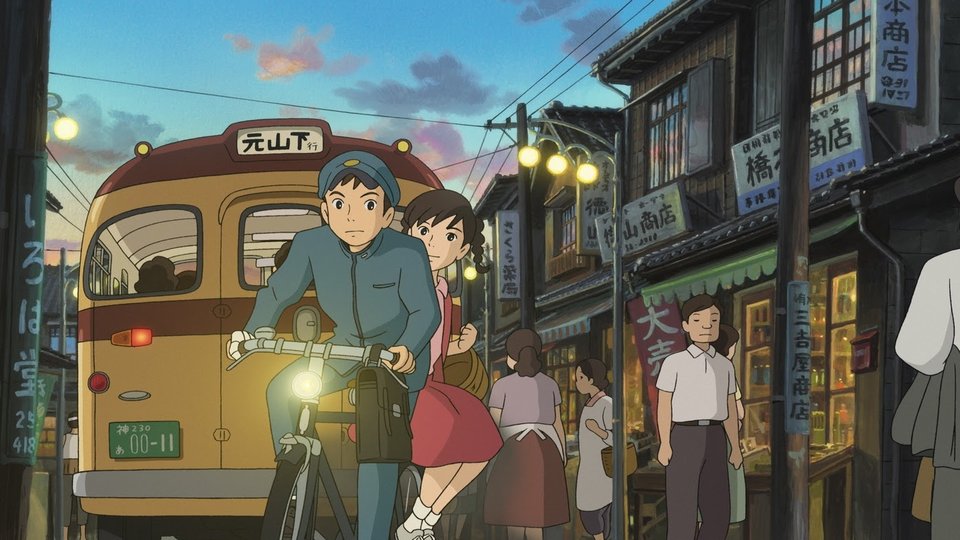 A group of school children look to save their clubhouse from demolition, as they also prepare for the 1964 Olympics in Tokyo. Living at the top of Poppy Hill is Umi and her family, and every day she raises flags related to the boats which come into the harbour. Soon she starts to discover a story about her deceased father, and sets out to find the truth.

From Up On Poppy Hill is only the second film from Goro Miyazaki, son of Studio Ghibli founder Hayao Miyazaki, and this continues his theme of environmental issues. Whilst there are two stories running through this film, the more interesting one is about Umi and her boat flags. There is great heart in this story and it’s very interesting to learn why she flies the flags – alongside a nice bit of humour whilst she is cooking food for the rest of the family. Once Umi’s story starts to look at her father’s history, it becomes slightly confusing as she also has a friend from school that is very much involved as well.

The second storyline in From Up On Poppy Hill, about the demolition of a school clubhouse, has some of the typical Ghibli slapstick humour but considering this takes up a lot of the film it becomes quite boring and uninteresting as it progresses. Mainly we see a group of school kids cleaning the clubhouse and having fun doing it, but there is not much more to it.

From Up On Poppy Hill doesn’t have the greatest of storylines or overly funny/tender moments when compared to other Studio Ghibli releases. The film runs at a gentle pace and tries to tell an environmental issue in-between a family history story but neither properly resolute in the whole film. Ultimately it’s a respectable movie but more for the Ghibli die-hards than standard animation fans.

Advertisement. Scroll to continue reading.
In this article:From Up On Poppy Hill, Studio Ghibli