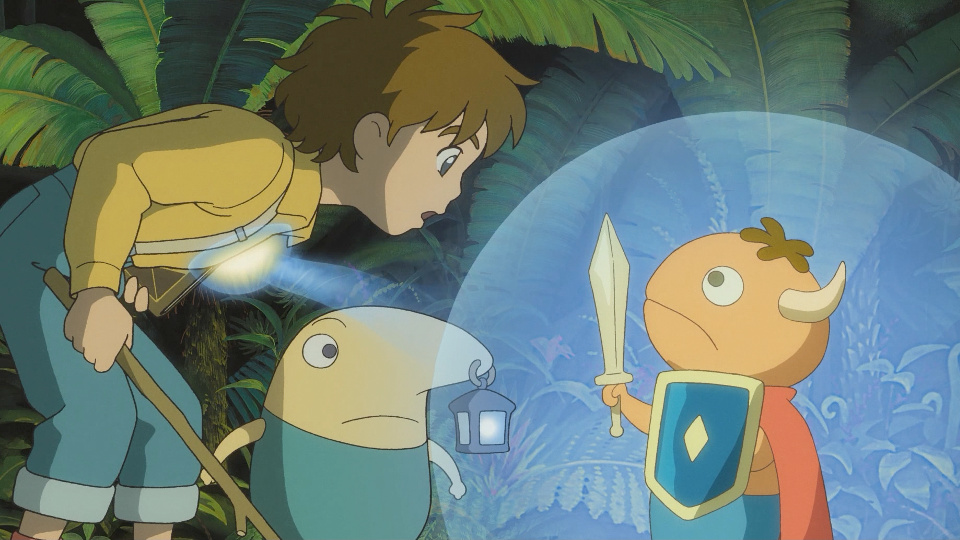 When I heard Level-5 were making a new RPG for the PS3, I was so excited. When I heard the incredible Studio Ghibli were involved, I jumped for joy. This was a recipe for success and the original PS3 version received a stellar reception. It’s taken eight years but the game has finally been remastered for PC but how is the port?

Oliver is a young boy who lives with his mother in Motorville. This reserved boy gets into trouble with his friend Philip every so often and after they take a late night drive in their kit car, things take a tragic turn as his mother passes away. When he seeks solace in his doll, his tears bring it to life. The doll reveals themselves as a fairy named Drippy, who tells him he can revive his mother if he travels to his world. In Drippy’s world an evil Wizard called Shadar has taken over the world and broken the hearts of the people. Oliver vows to defeat Shadar and restore the will of the people and find his mother’s soulmate, in hopes of bringing his own mother back to life.

Watch the Ni No Kuni: Wrath of the White Witch Remastered launch trailer below:

The whimsical opening becomes sorrowful pretty quickly but once the adventure in the Other World begins, a change brews within Oliver. He starts off as a weak boy but quickly finds his bravery and wants to help everyone on his journey. He’s a great character, he loves helping people and seeing him go to the ends of the earth to help someone is really endearing. His drive to revive his mother keeps him going when he wants to give up. Fortunately, Oliver isn’t alone and the friends he makes along the way have fantastic depth and an interesting story. Drippy is great, his thick Welsh accent and sarcastic wit make him a great mentor for Oliver. Swaine is a thief with a heart of gold, he has his own reasons for joining the crew and Esther is the daughter of a sage and has a fiery temper to match her magic. They work well together and their story unfolds over the course of the game very well. It’s a shame the villains are so generic but overall, the story is excellent.

Ni No Kuni: Wrath of the White Witch doesn’t want to be just a simple turn based game. While Oliver is capable of fighting, the bulk is left to Familiars. These Pokemon-like creatures have abilities and stats of their own but can only be used for a certain amount of time. Each party member has three they can use at once but there are many more to collect. Your party members also have magic and skills of their own. This makes for a very versatile combat system. When you land hits, enemies may drop health and magic glims and if you’re very lucky, a golden glim let’s you use an ultimate ability. Like Pokemon there are strengths and weaknesses to each Familiar, so keeping a mix of nine in your party is absolutely encouraged.

View some screenshots from Ni No Kuni: Wrath of the White Witch Remastered in our gallery:

As you level up, you can evolve your Familiar and teach it new moves and by feeding them their favourite treats and equipping them with items, they get even more powerful. There’s a constant sense of progression that always feels great. The open world feels great to explore and the visible enemies entice you to collect them. There’s a bevy of side quests and bounty hunts to keep you busy and completing each rewards you with stamps on a book that rewards you very often. As a package, there is so much to do and it never gets boring.

Ni No Kuni: Wrath of the Witch is an absolutely gorgeous game. The stunning animated cutscenes by Studio Ghibli ooze production values but have a poor frame-rate. Environments are stunning and have a light Dragon Quest vibe. Familiar and character designs are great. While there are no graphics settings to speak, there’s plenty of extra details to gawp at, foliage looks especially nice. Joe Hisaishi, once again proves he is a maestro with his incredible score. Voice acting is excellent across the board.

Ni No Kuni: Wrath of the White Witch has a great story with a strong lead character. It’s hard to not be invested in Oliver’s plight as he is so infectious. A deep and addictive Familiar system keeps you going for hours and the multitude of side content is perfect for JRPG fans. It’s a artistic dream and very strong RPG to boot and you would be a fool to miss this one.

Ni No Kuni: Wrath of the White Witch Remastered was reviewed using a retail copy bought by the reviewer.