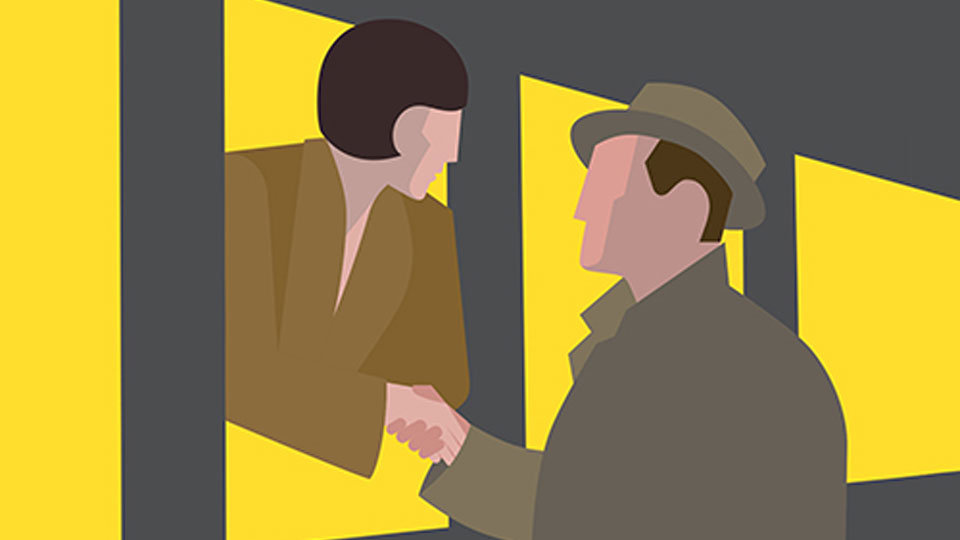 Two of Noël Coward’s ten short plays from his remarkable 1935/36 production Tonight at 8:30 are playing back to back at the Old Red Lion Theatre in Islington, a minute’s walk from Angel Station. They run to just under fifty minutes each, separated by an interval.

Still Life starts the evening, and is instantly recognisable from its more familiar guise, first created ten years later, as the basis of the David Lean movie Brief Encounter. For those unfamiliar with the story, the action takes place in the cafeteria of a train station. A random encounter between a young woman (Laura – played by Georgina Strawson, recently seen in Thatcherwrite) with dirt in her eye and a male doctor (Alec – played by Freddie Capper) who removes it, leads to a very innocent but intense romance between two married people. Coward simultaneously portrays two much more innocent and playful romances between the cafeteria and station staff. Over the course of a year, the affair between Laura and Alec develops into a deep love.

Still Life is given a reasonable showing here. It’s a little rough around the edges: the actors seem unfamiliar with the dizzying array of props, costume changes and detailed set – though these issues should iron themselves out during the run. What’s more inescapable is how very dated it now feels, which lends the piece a curiosity value and even imbues it with whimsy. It’s a very ‘Ealing Comedy’ high-japes and Blitz-spirit depiction of the working classes; yet they by far the warmest characters. Educated lovers Laura and Alec are stuffy and hard to care about, and perhaps as a consequence of the clipped tones of Celia Johnson and Trevor Howard, Strawson and Capper play it with the kind of heightened RP that is now rarely heard outside of attempts to satirise it. Neither actor seems especially comfortable with their characterisation and it may achieve credibility played a touch closer to their own personalities – though adjectives like ‘beastly’ do tend to leave actors between a unenviable rock and a hard place.

The comedy of Still Life doesn’t quite sparkle as much as it should, which draws attention even more to the leaden pondering over archaic social mores. A few punch lines are lost in a general muddle over shaky delivery, leaving Still Life stagnating where a little more confidence, lightness of touch and briskness would raise it up a notch.

Things pick up considerably after the break. The far less well-known Red Peppers enjoys a terrific showing here. It opens with a song, dance and comedy routine (with deliciously excruciating jokes) between husband and wife music hall entertainers George and Lily Pepper (Simon Manyonda and Laura Hanna) before they head backstage to change. Where it starts with reprisals and reproaches between themselves for various performance mishaps, the piece tightens into a frantic farce as the musical director, the theatre manager and even an aging former West End star storm the dressing room with bones to pick with the Peppers.

Red Peppers is fast-paced and very funny, and director Anthony Lau succeeds in bringing it to life in this fresh and bubbly production. Unlike Still Life, it retains a feeling of modernity and the language comes across as mostly naturalistic since the actors have an instinctual feel for it. There are subtle elements of pathos too – it’s Coward’s eulogy to the rapidly disappearing and now extinct music hall acts, killed by the silver screen and Joe Public’s changing tastes. In a short space of time he encapsulates the egos, delusions and frustrations of performing artists, but does so with warmth and wit.

Individually, Simon Manyonda and Laura Hanna are a joy to watch, but they are fabulously sparky together and make the whole piece delightfully easy on the eye. Hanna shows a natural talent for withering sarcasm, and she puts it to good use here, raising plenty of laughs in the process.

Whilst it would be too glib to say the evening’s entertainment varies in quality either side of the interval, Red Peppers is certainly the play that gels most successfully and is an endearing and very funny piece of theatre.