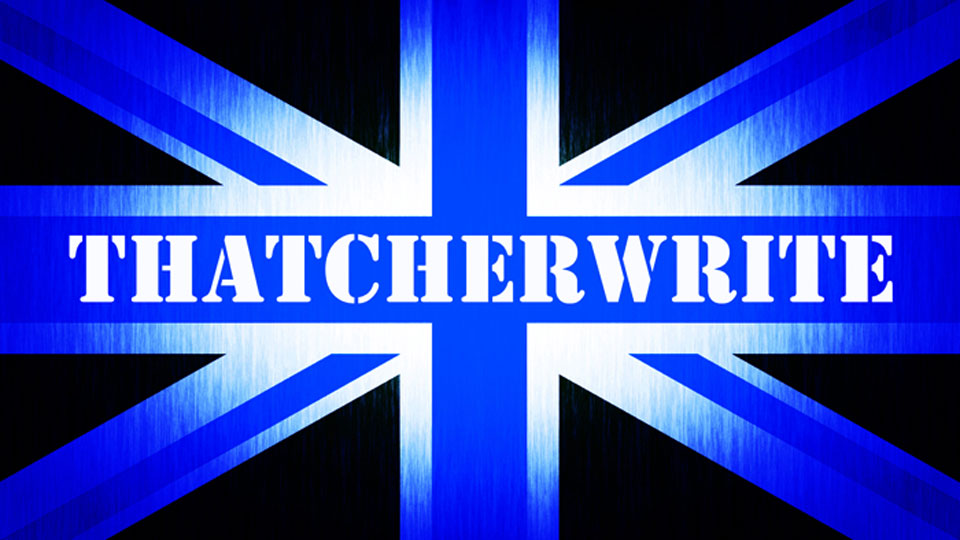 Eleven vignettes about Margaret Thatcher come together at Theatre503 for Thatcherwrite, an evening of short plays and poems that use the Iron Lady and her era of politics as a loose umbrella theme.

As with any production of this nature, where a multitude of voices compete to stand out, the quality of the writing varies; but the performance styles are hugely disparate too, which keeps the evening fresh.

You’re invited into Thatcherwrite by three grocers, whose wrangles over the salesmanship of apples are a metaphor for the markets. Subtle it isn’t, though in retrospect it’s a lot more nuanced that some of the other offerings; and of the three actors, the David Jason-like Paul Cawley is especially endearing. Is it a strong enough idea to warrant splitting into three parts though?

Unfortunately the divisive subject matter often sees writers granting themselves licence to bludgeon the audience with polemical tirades, and the awkward preaching-to-the-converted is evidenced most especially by three poems, I Am Sad You Are Dead Mrs T, all by poet and playwright Kay Adshead. By far the most successful is the final one performed by Bella Heesom, which does at least address Thatcher’s notion of society and her infamous dismissal of the idea.

The more interesting pieces present Thatcher from unexpected angles, or in ways that invite the audience, holding any position on the political spectrum, to look at the woman and her legacy anew. The immediate reaction to the young Georgina Strawson, energetically playing Thatcher in her final days at the Ritz in True Blue by Dominic Cavendish, is at first counterintuitive, but it forms a neat juxtaposition between who Thatcher thinks she is in her imagination, and the stark reality of her failing body. There are some wonderful syncopated lines: “I appear to be losing my manners,” Mrs Thatcher remarks, in a moment of lucidity.

1833 is another satisfying piece that acts as a short play in its own right (rather than as an extended sketch). Its neat idea is to tell the story of the British attitude towards its fellow citizens living on a far-flung outpost through the eyes of the Falkland Islanders themselves. There are arguably too many competing ideas jostling for attention in Jimmy Osborne’s short play, but it works very well as a two-hander, skilfully performed by Ryan Lane and Elle McAlpine, and it builds a palpable sense of tension. There are two unexpected laugh-out-loud lines (I won’t spoil the surprise) that deftly vary the tone too.

Suit and Tie is the first outright comedy, though it commendably doesn’t forget to tell a rounded story. It follows the adventures of two Thatcher-worshipping stock market traders. It would be easy to level the accusation of stereotyping at writer Ben Worth (who also directs and performs) yet the depiction of the awful tossers, detailed most especially in Andrew Sykes’ hilarious egomaniac, seems entirely accurate. Nuance is found in Worth’s character, a less confident, less successful trader desperately aspiring to measure up, and thus what starts out as a very funny sketch turns into a short play that exposes the futility and ephemeral nature of rampant Thatcherism with real satirical bite.

The most tangential offering is Fraser Grace’s My Dinnertimes With Clarence, which gently depicts the relationship between a teacher and pupil, which is as interesting for its discussion of Beckett as for its analysis of Thatcher’s view of education.

Wisely left until last is Jon Brittain and Matthew Tedford’s Margaret Thatcher Queen of Soho, a riotously anarchic piece that assesses the Thatcher government’s attitude towards gay people. As well as being on target with its satire, it also has the advantage of being killingly funny and hugely entertaining, not least for Matthew Tedford’s hilarious portrayal of the Iron Lady herself. I’d love to see a full production along these lines!

There is plenty of scope for having a pop at divisive politicians and their policies through telling human stories, and Thatcherwrite loses sight of that at times. It’s coincidentally playing concurrently with Blair’s Children, another political piece by different writers, which benefits from a stronger unity of ideas.

Thatcherwrite is a mixed bag, but there are enough hits amongst the misses to warrant a look, and the evening’s entertainment will find a natural audience amongst those with a fondness for political writing, sketches and short plays.